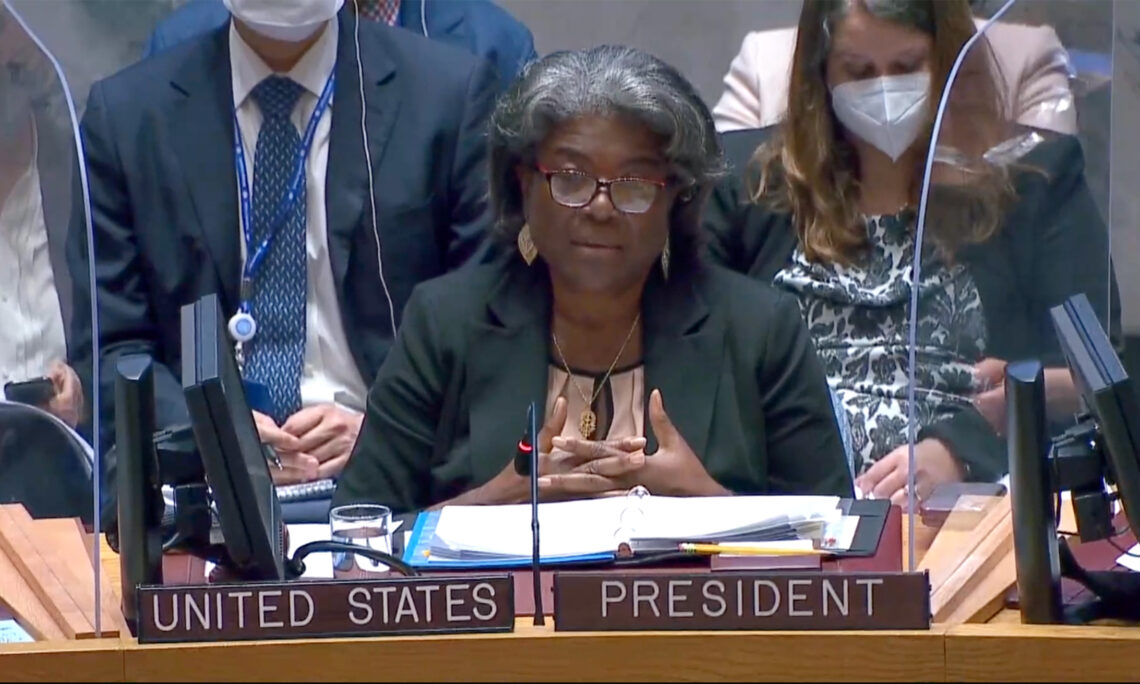 First, let me sincerely thank the Secretary-General for his remarks and for his update from the region. I am so glad that you’ve returned to us safe and sound, and I know that you must be jet-legged after your trip, practically around the world. But your being here shows us the commitment that you have to this institution. Also, thank you to Under-Secretary-General Griffiths and High Commissioner Bachelet for your remarks. And thank you to our civil society briefer, Tetiana Luzan, for joining us at this late hour for you, and for your powerful testimony here, today. I welcome the Representative from Ukraine, as well as His Excellency the Deputy Prime Minister from Poland, as well as other speakers who are here with us, today.

Colleagues, there are no signs Russia’s war against Ukraine is abating. Russia’s forces may have abandoned their attempt to capture Kyiv, but Russia continues to conduct missile strikes against Kyiv and terrorize citizens across Ukraine. Independent media reports have laid out a deadly pattern of attacks in the past two weeks.

On April 23, reports indicate Russian missile strikes killed civilians in Odesa, including a three-month-old – a three-month-old girl. Then, Russian missiles hit a thermal power plant and oil refinery in Kremenchuk the next day. The day after that, Russian forces attacked five railway stations across Ukraine. The following day, two rockets flew dangerously close to a nuclear power plant, posing colossal safety risks to the region. This string of attacks culminated on April 28 when Russia had the audacity to attack Kyiv while the Secretary-General was there to discuss humanitarian aid and peace.

Russia has violated the UN Charter. Russia has ignored our unified, global call to end this war. The message we continue to hear loud and clear from Moscow is that Russia does not respect or believe in the UN, our Charter, and will not be a responsible actor in the international system.

Russia has lied to this Council repeatedly with a wild string of conspiracy theories and disinformation, even falsehood more ridiculous than the last. Three months ago, Russian representatives told this Council they had no intention to invade Ukraine. Now Russia claims the attacks aren’t real or never happened. Russia has even claimed that Ukraine is attacking itself. That they bombed their own buildings, attacked their own people, and assaulted their own democracy.

These lies defy all logic, evidence, and common sense. Russia is spreading pure disinformation. The truth is well known. Russia is the only perpetrator of this war. So, it’s hard to understand while some Council members continue to call on “all parties” to desist. Let’s call a spade, a spade. Members should call on Russia, explicitly, to stop its aggression against Ukraine.

We have imagery that confirms the presence of mass graves in Bucha, and this is not just an unverified accusation on social media. It is a horrifying fact; one the world must now reckon with. Russia alone started this war and Russia alone can end it. Silence the guns, withdraw from Ukrainian territory, and embrace diplomacy.

Recently, the eyes of the world have been trained on Mariupol, where hundreds of civilians have been taking shelter in a steel plant besieged by Russian forces. We all watched in horror as Russia laid siege mercilessly against civilians trapped inside and underground for weeks. This week, the UN and President Zelenskyy announced that over a hundred Ukrainians have finally been rescued and reached relative safety. ​And we applaud the UN and ICRC’s role in this rescue, and we strongly support the five convoys the UN has sent to besieged areas. But we’re concerned that attacks on the plant have reportedly resumed with civilians still inside and we’ll be following this situation closely.

What we truly need is unhindered access throughout Ukraine, so the UN and its partners can reach everyone in need and people of all nationalities can flee to safety. Convoys and evacuations take days and weeks, or months of intense negotiation. They cannot be the norm. The only norm we should accept is Ukraine returning to its normal life, without Russian forces illegally in its territory, terrorizing and killing civilians, including so many innocent children.

Here in the Security Council and at the United Nations, we can help Ukraine return to normalcy. We can do that in two ways: by supporting the Ukrainian people and their efforts, and by holding Russia accountable.

On the first point, we must address the immediate and dire humanitarian situation, both in Ukraine and outside of it. And for our part, the United States announced this morning at the pledging conference in Warsaw that we will provide an additional $387 million in humanitarian assistance to Ukraine. This brings the total we have committed thus far to over $688 million since Russia’s further invasion. That money will help our brave partners rapidly distribute food, clean drinking water, sanitation and hygiene kits, critical medical supplies, and even cash to those who need it most in Ukraine.

We must also be equally attentive to the way Russia’s war of choice is harming countries beyond Ukraine’s borders, from the arrival of millions of refugees to Europe, to the global food crisis that is hitting African and Middle Eastern markets particularly hard. I suspect we will hear more details about this from our colleagues who are joining this meeting today. Russia is actively halting Ukrainian agricultural production and blocking the ports that once provided food to those in dire need. While we work to stop this blockade and hold Russia to account for its actions, we will all be called to step up and prevent looming famines, and provide more food and funding in the name of decency and humanity. We will focus the attention of this Council on this and other aspects of global food insecurity during the open debate we will convene later this month.

And second, we must hold those in Russia who unleashed, perpetrated, and ordered the war crimes committed in Ukraine to account. The United States supports a range of international investigations into the atrocities in Ukraine, including efforts by the International Criminal Court, the United Nations, the Organization for Security and Cooperation in Europe, and others.

Make no mistake: we will see justice served.

The Ukrainian people are fighting for their lives, for their future, and for all of the values the UN holds dear. We stand with them, and with the overwhelming majority of the international community, in defense of sovereignty, of liberty, and democracy.

By United States Mission to the United Nations | 5 May, 2022 | Topics: Highlights, Remarks and Highlights