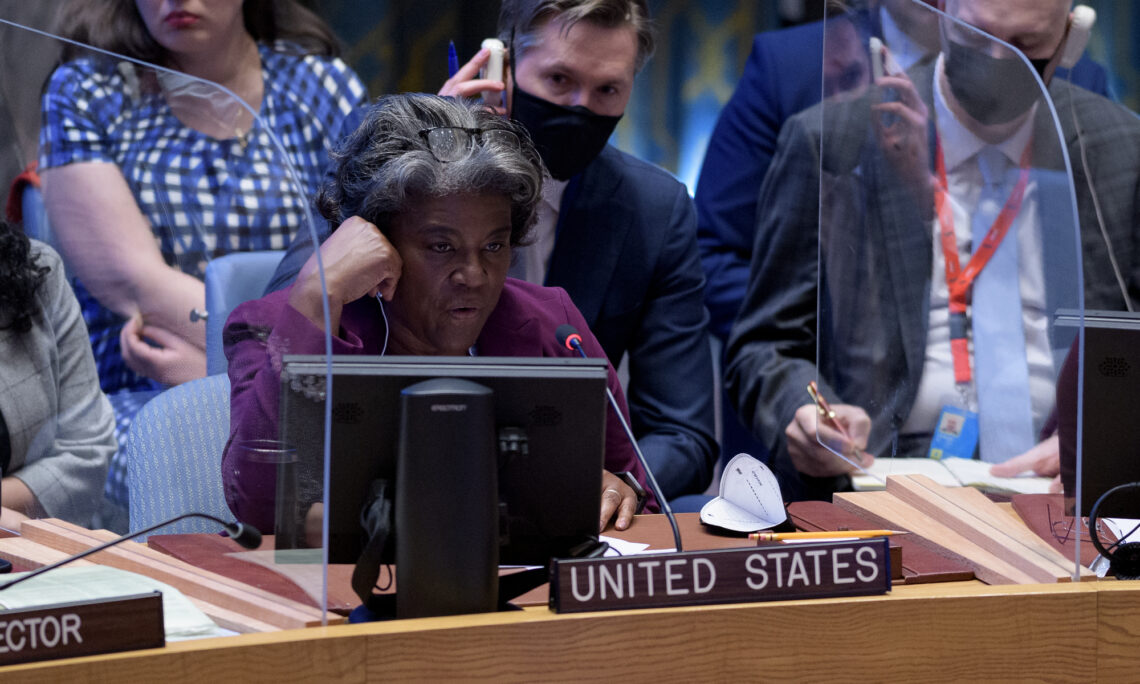 Linda Thomas-Greenfield, Permanent Representative of the United States to the United Nations, addresses the Security Council meeting on the situation in Ukraine.

Good morning and thank you, Mr. President. We’re honored by your presence here with us today, and thankful to the United Kingdom for leading this debate. Thank you to our briefers from UN Women and UNICEF for your remarks – and for the work your teams are doing on the ground. I too visited Romania and Moldova and saw your teams on the ground working with vulnerable people. And I’d like to give an especially strong thank you to Ms.Cherepakha for being with us today and for sharing the voices of women and children in Ukraine. She’s the first civil society briefer we’ve had brief us in an official Council meeting. Thank you very much.

On Friday, a train station being used for civilian evacuations – mostly women and children – was struck by a Russian missile. Washington Post reporters saw at least twenty dead, including children. Limbs and luggage were scattered everywhere. A maimed dog shivered next to one of the dead. According to the reporters, a large piece of missile on the scene had chilling words written on the side. In Russian it said: “for the children.” That is what Russia’s war looks like. What is happening to women and children in Ukraine is horrific beyond comprehension.

Mr. President, when I was in Moldova and Romania, I saw with my own eyes some of the human toll of Russia’s brutal war. I met with a few of the 11.6 million people who are now displaced from their homes – representatives of the largest refugee crisis in Europe since World War II. The mass displacement includes over half of all of Ukraine’s children. Half of Ukraine’s children have left behind their homes, their schools, and often, at least one of their parents.

Meanwhile, 90 percent of refugees from Ukraine are women and children, and as our briefers made clear today, being a woman or a child adds an additional risk. Women in Ukraine are at increased risk for gender-based violence including rape, sexual assault, and sexual exploitation.

We know that anyone at risk before a war is at heightened risk of being targeted for physical and sexual violence during a war – and that includes women and children, religious and ethnic minorities, LGBTQI+ individuals, and people living with disabilities.

The deputy mayor of Ivankiv told reporters that some girls are cutting their hair short, in hopes of avoiding rape by Russian troops. Family separation leave girls, in particular, at increased risk for sexual exploitation and trafficking. And we’ve heard sobering reports of traffickers targeting women as they seek protection abroad.

For our part, the United States-funded humanitarian efforts in and around Ukraine,lift up networks for survivors of gender-based violence in Ukraine and in neighboring countries. And we’re supporting programs for child protection and advocacy, too.

We will continue to support our partners in these efforts. For example, we are highly supportive of UNICEF’s mobile child protection teams, and we’re working in conflict zones like Ukraine to deliver life-saving supplies and provide emergency social work services.

These horrific acts also remind us that we must support efforts to prevent them from happening in the first place. This means ensuring that women’s voices and rights are always respected and elevated. And it means ensuring that abuses against them, and against children, are held to account. There must be pathways to healing and access to justice for survivors

Finally, I want to remind us all that women are far from passive victims in this war. As we just heard from UN Women, women are playing critical leadership roles in Ukraine to address this impact of the war. Some women are valiantly defending their homes, their communities, their country – including many women who have been serving in the Ukrainian military since 2014. Others are protecting their families and their children, bringing them to safety. And still others are the ones supplying food and shelter, water and medicine to those in need.

Women are the ones who will get Ukraine through this humanitarian catastrophe. And women must be consistently and meaningfully involved as active participants and leaders in securing long-term, sustainable peace.

When I met with women in Moldova and Romania, they all had different stories. But they all had the same dream: to return to a peaceful Ukraine. To return to a Ukraine where they have a say in their own, and their children’s future. Let us ensure women are a robust part of that peace process. And let us hope that day they dreamed of comes soon.

Thank you very much, Mr. President.