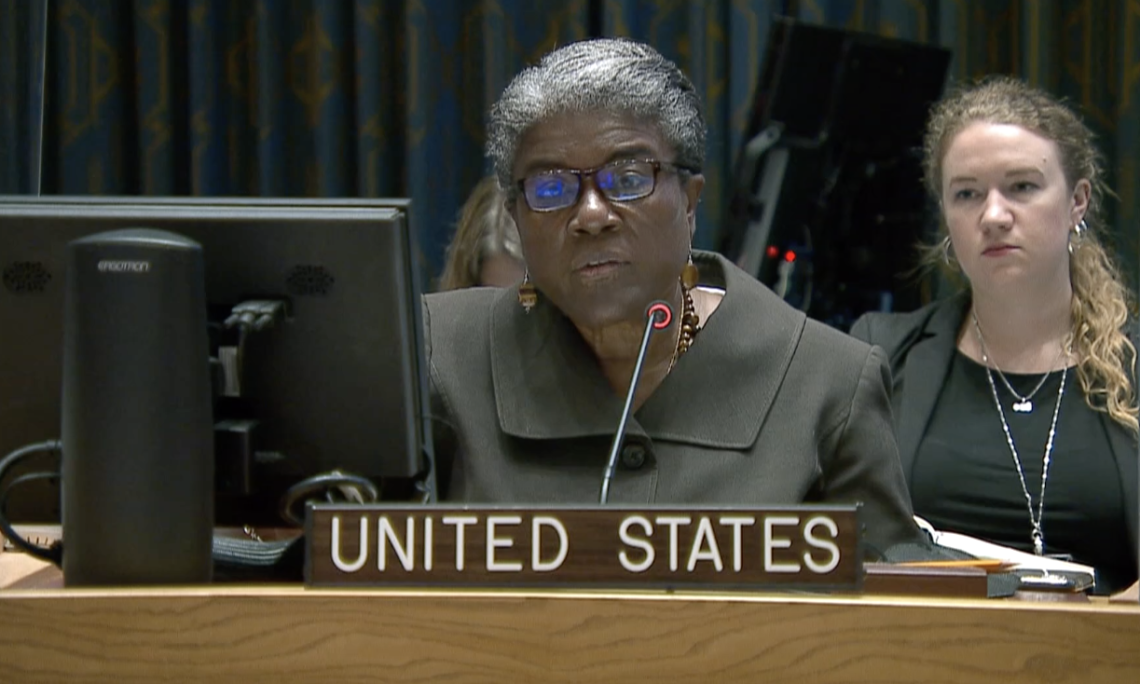 Thank you, Mr. President. And let me thank the Deputy Special Coordinator Hastings for her briefing.

Today, I’d like to share an update from President Biden’s visit to Israel and the West Bank this month, which demonstrated the strength of the United States’ bilateral relationship with Israel, including our continued steadfast commitment to Israel’s security. This trip also highlighted our determination to bolster the U.S.-Palestinian relationship, which has roots going back to the 1800s.

The President had productive meetings with Israel’s President Isaac Herzog and Prime Minister Yair Lapid, as well as other Israeli leaders, on the full range of issues that define our strategic partnership. He was also able to visit Yad Vashem, where he met with some of the last living Holocaust survivors – a powerful reminder of the sacred promise we have made: never again. President Biden commended the Abraham Accords and Israel’s normalization agreements with the UAE, Bahrain, and Morocco which, alongside Israel’s peace treaties with Egypt and Jordan, contribute to security, prosperity, and peace in the Middle East.

The I2U2 Virtual Summit of India, Israel, the UAE, and the United States the President convened showed the potential of closer cooperation between Israel and other countries in and outside the region. And Saudi Arabia’s announcement that it would allow Israeli airlines to use Saudi airspace was another important step in building a more integrated region.

Critically, the President also highlighted the opportunity these normalization agreements provide to advance Israeli-Palestinian relations and address the needs of the Palestinian people. As we have repeatedly said in this Council, normalization agreements are important in their own right, but they are not a substitute for a negotiated two-state solution. Indeed, President Biden reiterated the Administration’s commitment to a two-state solution – and emphasized the importance of promoting a future in which Israelis and Palestinians alike can enjoy equal measures of security, freedom, and prosperity. And after their meeting, Prime Minister Lapid also expressed support for a two-state solution.

The President also acknowledged Jerusalem’s importance to the multiple faiths and nationalities when he said, and I quote, “Jerusalem is central to the national visions of both Palestinians and Israelis – to your histories, to your faiths, to your future. Jerusalem must be a city for all its people.”

During his visit, President Biden also met with President Mahmoud Abbas in the West Bank and reaffirmed our shared commitment to strengthen the Palestinian economy and improve the quality of life for Palestinians. To that end, as you heard, he announced several initiatives to support the Palestinian people, including expanding 4G digital connectivity to Gaza and the West Bank, improving accessibility to the Allenby Bridge, and providing $316 million in new assistance, all for the benefit of the Palestinian people. This aid includes a plan to provide up to $100 million in support for the East Jerusalem Hospital Network, which delivers specialized care and emergency services to 50,000 patients from East Jerusalem, the West Bank, and Gaza annually. We were pleased that Kuwait, Qatar, Saudi Arabia, and the United Arab Emirates committed to provide an additional $100 million to these Jerusalem hospitals, and we urge other countries to support the Palestinian people.

Our new assistance also includes $201 million for UNRWA to continue delivering critical services to the Palestinian refugees in the West Bank, in Gaza, Jordan, Lebanon, and Syria. We fully support UNRWA’s life-saving work and continued efforts to improve its operations and to guarantee that its works fully support and respect the principles of neutrality, tolerance, respect for human rights, equity, and non-discrimination. We call on others to join us in supporting UNRWA to ensure its services can continue.

Finally, President Biden announced the United States is providing $15 million in additional humanitarian assistance to support 210,000 vulnerable Palestinians, who are food-insecure among a growing global food security crisis, which has been exacerbated by Russia’s invasion of Ukraine. In short, the President’s visit demonstrated that the United States remains deeply committed to peace and prosperity in the Middle East.

We urge all parties in the region and around the world to support in word and deed the goal of a peaceful and prosperous region, including through bolder action to create the conditions for a two-state solution. Thank you, Mr. President.