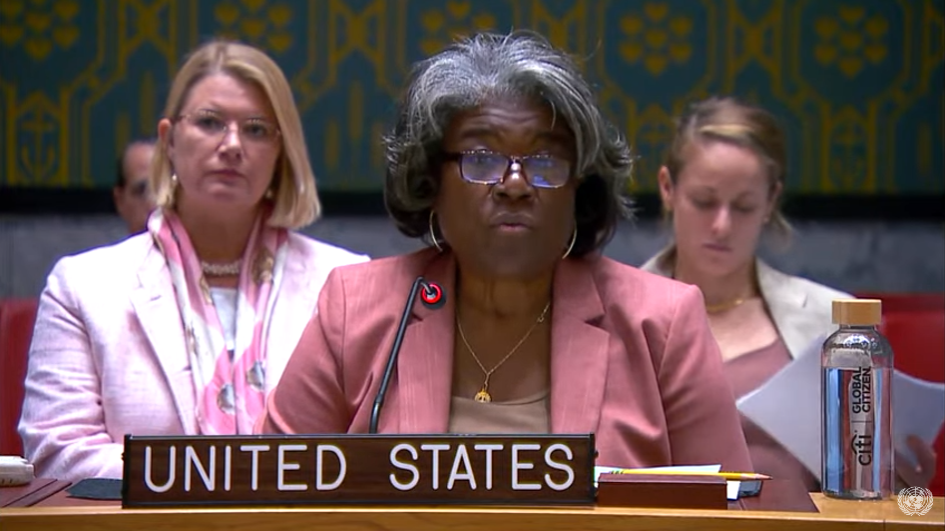 Thank you, Mr. President. Thank you, Special Coordinator Wennesland, for your informative briefing.

From day one, the Biden Administration has been unequivocal in our support for a two-state solution. That has not changed. As President Biden made clear to the UN General Assembly last week, “A negotiated two-state solution remains…the best way to ensure Israel’s security and prosperity for the future and give the Palestinians the state…to which they are entitled.”

And we are not alone in pushing for such a peace. In fact, the hall of the General Assembly was filled with calls for a two-state solution during High-Level Week. Prime Minister Lapid made a courageous and impassioned speech that articulated his vision of “two states for two peoples.” The significance of his appeal for peace between Israelis and Palestinians should not be underestimated.

And I also want to acknowledge President Abbas’s stated commitment to non-violence and reaffirmation of his support for a two-state solution.

Now, it is time to turn these words into action. To make real, sustained progress. It is incumbent on both parties to work in good faith toward two states for two peoples. There are no short-cuts to statehood. In this vein, we strongly oppose unilateral actions that exacerbate tensions and move us further away from a two-state solution – that move us further away from peace.

This includes terrorist attacks and incitement to violence against Israelis. This includes plans to develop Har Gilo west, which would further fragment the West Bank – and possible demolitions in Masafer Yatta. And this includes violence inflicted by Israeli settlers on Palestinians in their neighborhoods, and in some cases escorted by Israeli Security Forces. I’ll also note that the United States is concerned about increasing tensions and violence in the West Bank among Palestinians, including the recent clashes in Jenin and Nablus. We are troubled by the overall trend of growing violence.

Instability in the West Bank is neither in the interests of Israel nor the Palestinian people. We call on both sides to work toward peace without delay.

The United States is doing its part to help. This July, while in the region, President Biden announced a number of measures to improve conditions for the Palestinian people in the West Bank and Gaza, including additional funding for UNRWA. We’re now working to expand 4G digital connectivity to Gaza and the West Bank and improve accessibility to the Allenby Bridge. And we encourage the Government of Israel to move these projects forward quickly.

Before I close, I want to make note of the historic visit by the UAE Foreign Minister to Israel earlier this month. The United States will continue working with Israel and its neighbors to expand relationships across the region. And we will strive to ensure these new relationships also benefit the Palestinians.

Colleagues, even if present circumstances don’t lend themselves to negotiation, we must not retreat into cynicism. The international community can and must take steps to achieve conditions conducive to negotiating a two-state solution. This will be a real challenge, but it’s a challenge we must take on together. The United States will not hesitate to work with our partners to build a brighter and more peaceful future.