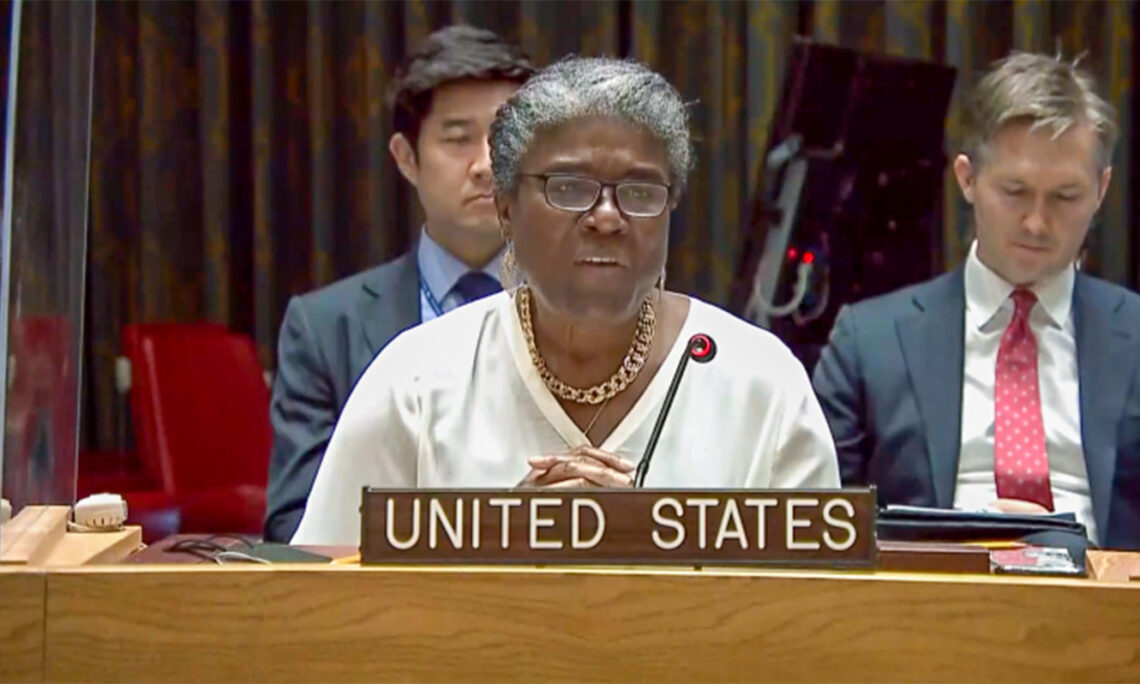 Thank you Mr. President, and thank you to Under-Secretary-General DiCarlo for your briefing today.

I, too, want to take a moment to express my sincere appreciation to Ambassador Nason, to Geraldine, for her contributions to the Security Council during the one year, a bit over, that we have worked together, I’ve admired your steadfast approach, your commitment to finding a way forward for peace and security. So I wish you the best of luck in the future and I look forward to seeing you in Washington.

The UN Charter is this organization’s most sacred document. It’s more than a small blue booklet, and it is more than noble words on the page. It is a commitment. It is a commitment that we have all freely signed as members of these United Nations. It is the embodiment of our ideals. It is the most powerful tool we have, in its opening words, “to save succeeding generations from the scourge of war.”

Today, we are here to discuss how one country – Russia – has effectively set the UN Charter on fire. Since Russia’s full-scale invasion of Ukraine in February, the world has witnessed Russia’s flagrant violations of international law and complete, complete disregard for the UN Charter and the principles of peace, sovereignty, and the protection of civilians that it holds dear.

The International Court of Justice has ordered Russia to immediately suspend its military operations. The UN General Assembly has adopted resolutions with overwhelming support from the international community that have condemned Russia’s aggression, demanded an end to the invasion and the withdrawal of Russian troops, and suspended Russia from the Human Rights Council.

Instead of following these demands and feeling ashamed by these clear condemnations, Russia has in fact publicly expanded its war aims. There should no longer be any doubt, as we warned early this year, that Russia intends to dismantle Ukraine as a geopolitical entity and dissolve it from the world map entirely. We are seeing growing signs that Russia is laying the groundwork to – yet again – attempt to annex more of Ukraine’s territories. That includes the installation of illegitimate proxy officials in Russian-held areas, with the goal of holding sham referenda or decree to join Russia. Minister of Foreign Affairs Lavrov has even stated that this is Russia’s war aim.

Specifically, Russia is currently reviewing plans to attempt to annex the regions of Kherson and Zaporizhzhya, and all of the Donetsk and Luhansk oblasts. This is galling. The acquisition of territory by force is about as clear a violation of the UN Charter as you can get. And we cannot, we will not stand by and let it happen in silence.

So yes, we welcome the progress made in Istanbul last week on the export of grain and food, and commend the Secretary-General and the Government of Türkiye for their efforts to facilitate this much-needed progress. But we also saw Russia’s true character a few hours later when it launched a missile attack on the Port of Odesa. Bombing a port does not make it easier for grain to get out. Russia should allow grain and food to leave Odesa unharmed to feed a hungry world.

These cruel acts should come as no surprise. As we have said many times, we assess that members of Russia’s forces have committed horrific war crimes in Ukraine. Those who perpetrated and ordered those crimes must be held to account for their actions.

For those countries which say that one country’s security should not come at the expense of another’s: What exactly do you call Russia’s armed invasion, an armed invasion of its neighbor, disdaining attempts at a peaceful resolution by silencing its guns, withdrawing its forces, and embracing diplomacy? For countries which call for all parties to embrace diplomacy without naming Russia, let us be clear: Russia’s ongoing actions are the sole obstacle to a resolution to this crisis.

The evidence of the scale of atrocities continues to mount. We have seen credible reports of the bombing of schools and hospitals – you heard Under-Secretary-General Di-Carlo’s comments today – the killing of aid workers and journalists, the targeting of civilians attempting to flee, the brutal execution-style murder of those going about their daily business in Bucha. And we have seen the violent abuse, the forced deportations of Ukrainian civilians through so-called “filtration” operations.

To date, there is evidence Russia’s forces have interrogated, detained, forcibly deported an estimated hundreds of thousands of Ukrainian citizens, including children – tearing them from their homes and sending them to remote regions in the East. As of May, in one location within a Russia-controlled area of Ukraine, there were over 20,000 people in line for filtration. The process of filtration is slow, with some Ukrainians waiting up to three weeks to be processed. Given the long wait, reports indicate that filtration center employees and people awaiting filtration were selling places in line.

The United States has information that officials from Russia’s Presidential Administration are overseeing and coordinating filtration operations. Russia is also using advanced technology to facilitate filtration processes, including for the purposes of collecting data on Ukrainians undergoing filtration. In 2021, officials within a Russian-controlled area of Ukraine formulated a draft list of over a dozen proposed locations for filtration operations, including reinforced police stations.

Let me put this in plain terms: Russia is tearing families apart. It is sending children to remote regions away from their homes. It is forcibly replacing people’s passports and attempting to impose its own identity over the national identity of Ukrainian citizens. And it is expanding this horrific operation in blatant, blatant disregard for the principles of national sovereignty.

Despite the disinformation Russia peddles in this very chamber, no one believes Ukraine is doing any of this to itself. Every member here has borne witness to the atrocities. And we will not forget. Each and every atrocity deserves accountability.

The awful consequences of this conflict – the millions of Ukrainians who have been forced to flee their homes into neighboring countries or other parts of Ukraine, the disruption to food and other essential supplies, the war crimes and atrocities against civilians and the resulting trauma – will only end when Russia ends this war.

Until that fateful day, the rest of us have a duty – we have a duty to stand up, to say enough is enough, and to defend the Charter, the Charter that we have all pledged to support.