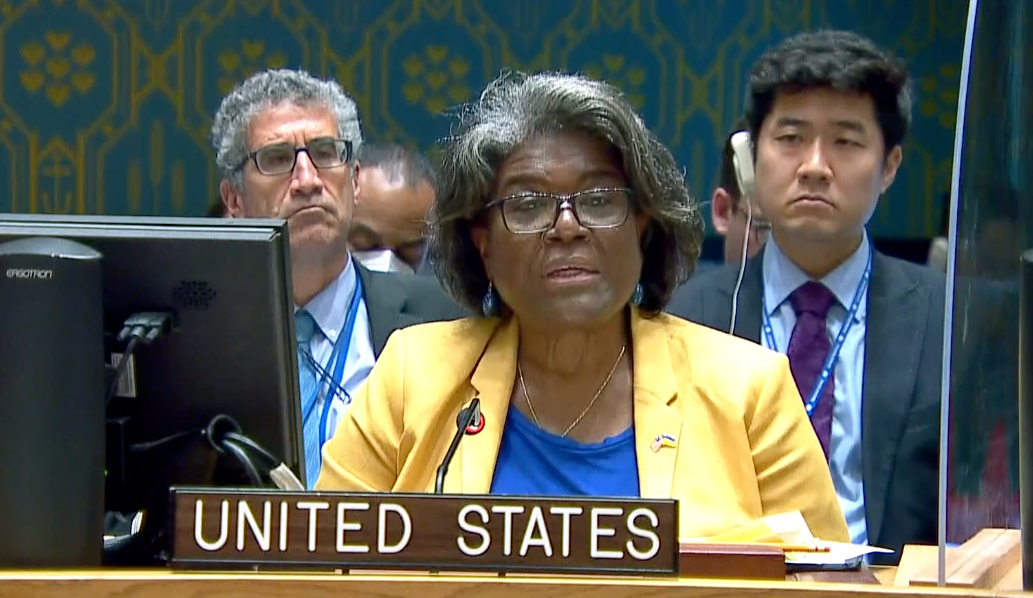 I would also like to congratulate Ukrainians on their Independence Day and thank President Zelenskyy for participating in this meeting today. President Zelenskyy, the United States stands with you and the people of Ukraine today and every day. And every Russian bomb that falls only strengthens our resolve to support your sovereignty and your independence.

Today marks six months of Russia’s premeditated, unjustifiable, and brutal full-scale war against Ukraine. Just six months since we, sitting here in the Council Chamber, watched as Russia, serving in the Presidency, attempted to defend the indefensible.

Six months of Russia’s defiance of the international community.

Six months of Russia’s flagrant lies and disregard for international law, including violations of the UN Charter.

Six months of devastation and missile strikes that have torn apart families and stolen the lives of too many – like the life of four-year-old Liza Dmytriyeva, killed last month in a missile strike that left 24 people dead.

Six months of horrific atrocities, including rape, murder, and torture in towns like Bucha and Irpin and others.

Six months of families being separated, and millions displaced.

Six months later, Russia’s goal is as clear as ever: to dismantle Ukraine as a geopolitical entity and erase it from the world map.

Russian disinformation campaigns are increasingly being weaponized to prepare for further attempts to annex Ukrainian territory. Russian Minister of Foreign Affairs Lavrov publicly acknowledged this as one of the Kremlin’s objectives. Specifically, Russia is laying groundwork to attempt to annex the regions of Kherson and Zaporizhzhya, and all of the Donetsk and Luhansk oblasts.

Let’s be clear: The international community will never recognize Russia’s attempt to change Ukraine’s borders by force. And when the world’s leaders come to New York next month to reaffirm their commitments to the UN Charter, they are also reaffirming their support for that basic principle.

So, no matter how many more sham referendums, illegitimate authorities Moscow tries to install, we will continue to defend the UN Charter and uphold Ukraine’s sovereignty, territorial integrity, and independence.

And as we discussed yesterday, Russia is responsible for creating another grave risk to another core commitment by the international community to nuclear safety. Ukraine had an impeccable record of nuclear energy safety and security at the Zaporizhzhia Nuclear Power Plant. But Russia recklessly attacked and seized control of this plant by force, risking nuclear disaster.

In a similar vein, we are particularly concerned by Russia’s so-called “filtration” operations, which involve the systematic forced deportations of Ukrainian civilians to remote areas of Russia. These camps are abducting and separating children from their parents. Russian forces are forcibly confiscating and replacing passports, dictating curriculums in schools, and replacing Ukrainian street names and other public signs with Russian language alternatives.

The evidence of Russian forces interrogating, detaining, and forcibly deporting hundreds of thousands of Ukrainians, including children, continues to mount. Their reasons are clear: They want to destroy Ukraine – its culture, its people, its very existence.

Even where we have seen progress – like the movement of grain and other foodstuffs from Ukrainian ports following the much-needed arrangement signed in Turkiye – Russia did not let us forget about its intentions. Mere hours – hours – after the deal was inked, Russia launched missiles at the Port of Odesa. Those missiles were a potent reminder: Millions of Ukrainians are still under siege, and tens of millions around the world are being driven to hunger by Russia’s actions.

For all this violence and carnage, these hunger and humanitarian crises, these human rights abuses and threats to vulnerable groups: Russia – and Russia alone – bears sole responsibility. And Russia alone is the sole hinderance to a swift resolution to this crisis. We must continue to call for and ensure accountability for all of Russia’s atrocities.

Today marks six months of the war, but it also marks Ukraine’s Independence Day. A day normally celebrated by parades, with festivals, with joy. Many of us came together in a similar kind of celebration on July 4th last month, on the UN Lawn, as America celebrated its independence. And we ate, and we danced, and we looked in awe at the fireworks in the sky. In Ukraine today, there are none of the typical festivals. No feasts or concerts. Citizens have been told to stay away from cities and to look for very different kinds of explosions from the sky – and we heard President Zelenskyy describe just that to us today.

One Ukrainian citizen told an NPR reporter that she hopes that – and I’ll quote her – she hopes that “we can celebrate independence without weapons in the future – maybe with flowers and dances instead.”

Let us do everything we can to bring flowers and the dances back to Kyiv, back to Ukrainians. And let us pray that by this time next year, her dream has come true.