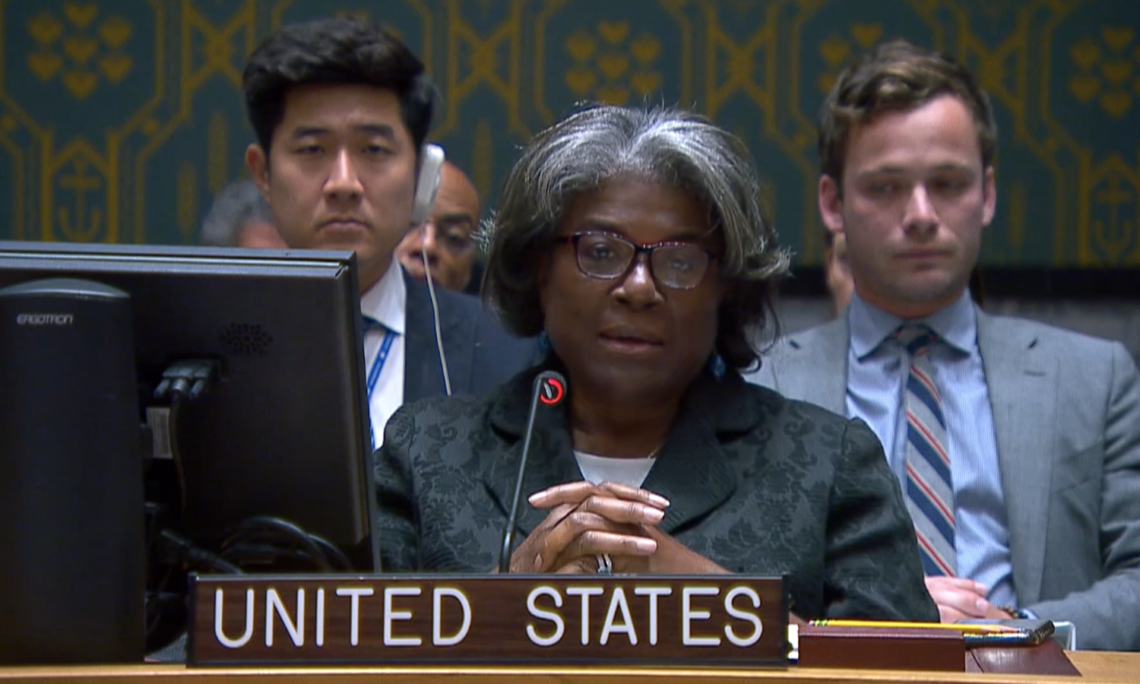 Thank you Mr. President, and thank you to Under-Secretary-General Rosemary DiCarlo for your briefing today. Thank you, President Zelenskyy, for your statement.

Colleagues, a little more than seven months ago – just seven months – we met at night, in this chamber, to discuss how we could preserve peace in Ukraine. At that moment, Putin chose war instead. The timing could not be clearer. Putin was showing exactly what he thought of this Council.

Last week leaders from more than 100 countries from around the world gathered in New York to reaffirm their commitment to the UN Charter and many of the key principles it stands for: sovereignty, territorial integrity, and peace and security. Instead of attending High-Level Week, Putin announced a renewed conscription effort in Russia and instructed areas under Russia’s military control to prepare for illegitimate snap referenda. He did send an emissary – who threatened the use of nuclear weapons, on a non-nuclear country, to secure Russia’s illegitimate military gains.

The purpose of all of this is clear: Russia intends to try to annex these territories. And Russia does not respect this body. The pattern is clear too: Putin intentionally chose this moment to insult the Charter that outlines principles we all collectively stand for – sovereignty, territorial integrity, peace and security – and he did this during the most important week for the United Nations: High-Level Week.

Putin intends to commit an act which the UN Charter was expressly designed to prevent: An attempt by one UN Member State to take the territory of another by force. We know this will happen because it follows a well-worn Kremlin playbook. Russia runs sham referenda, in areas controlled by Russia’s military and its proxies, coercing people to “vote” at gunpoint. It then uses these referenda to try to lend a semblance of legitimacy to its attempted annexations of another sovereign state’s territory. The rush for Russia to institute and complete these attempted annexations destroy even the façade of legitimacy.

As Ukraine successfully regains control over more of its territory that was wrongfully seized by Russia and more of Russia’s atrocities are uncovered, Russia is rushing to draw a veil over its military losses and the war crimes it has committed.

This Council and the international community must do the same.

So now let me be clear: The United States will never recognize any territory Russia attempts to seize or allegedly annex as anything other than part of Ukraine. We reject Russia’s actions unequivocally. And we will continue to work with our allies, partners, and like-minded, to impose costs on Russia and to provide historic amounts of support for Ukraine.

In our many meetings here in the Security Council, we’ve heard repeated calls for the UN Charter to be respected. But it is not enough to call for respect of the UN Charter; we must have the courage to defend it. That means standing up for Ukraine and the victims of Russian atrocities. It means having the courage to call out aggression and attempts at naked territorial expansion when we see it. It means showing we care about peace by demanding Russia honor the UN Charter. Not doing so only enables Russia to commit further abuses.

Russia started this war, and I hope that every member of this Council will do the right thing by standing up for international law and the UN Charter by calling on Russia to end it now.

Ukraine’s fight is not only a fight for survival, but a fight for democracy and the very principles that we all hold dear.

That is why we will be tabling a resolution condemning these sham referenda, calling on Member States not to recognize any altered status of Ukraine, and obligating Russia to withdraw its troops from Ukraine. Russia’s sham referenda, if accepted, will open a Pandora’s box that we cannot close. We ask you to join us in reaffirming our commitment to the UN Charter and meeting this challenge head-on.

If Russia chooses to shield itself from accountability here in the Council, we will then look to the UN General Assembly to send an unmistakable message to Moscow. The world must stand together and defend the Charter of the United Nations.