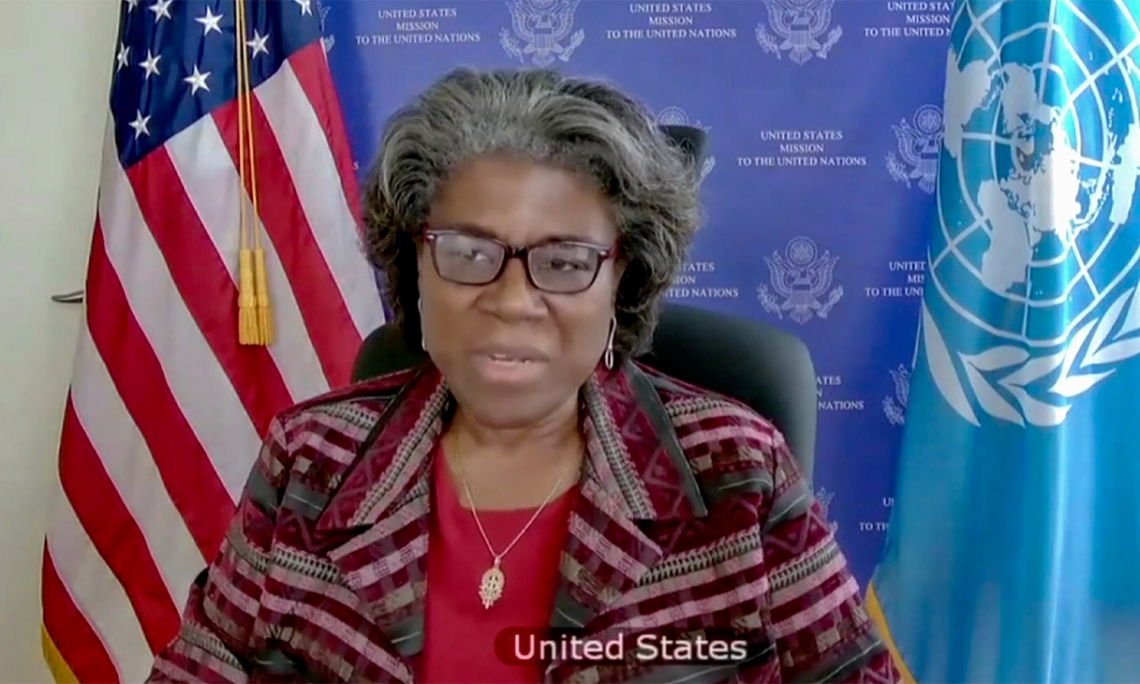 Thank you, Mr. President. And let me thank the briefers for your informative updates.

Today I’d like to talk about three aspects of the situation in Yemen: our efforts toward a ceasefire, the Houthi violence and violations preventing peace, and the country’s dire humanitarian crisis.

First: diplomacy can, should, and must end the war in Yemen. And we heard that from Martin. U.S. Special Envoy Timothy Lenderking is leading our diplomatic efforts, working closely with the UN to bring the parties together and conclude this conflict. The goals are clear: achieve a comprehensive, nationwide ceasefire, re-open Sana’a’s international airport, implement the Stockholm Agreement’s financial provisions, and immediately start political consultations. Special Envoy Lenderking’s return in late March from Saudi Arabia and Oman, where he held productive meetings with Omani, Saudi, and Yemeni senior leaders, in coordination with Special Envoy Griffiths, is part of that. As he outlined on that trip, the first step is for all parties to stop fighting and commit to a ceasefire.

And this leads me directly to my second point: Houthi actions to date do not lead us to believe they are committed to a peaceful resolution of the conflict. The Houthi offensive in Marib continues to take Yemeni lives – including those internally displaced. And we condemn the Houthis for their violence against IDP sites on the outskirts of Marib, as well as the almost daily drone and ballistic missile attacks on Saudi Arabia.

Worst of all, the Houthis continue to consistently defy people’s basic human rights. Levi Marhabi, a Yemeni Jew, has been wrongfully detained by the Houthis just for his religious beliefs. For years he has sat behind bars without cause. His mother has stayed in Yemen – risking her own life – to be near him. And she refused to abandon her child. But a few weeks ago, the Houthis summarily deported more members of the Yemeni Jewish community, including Levi’s mother. And the pain that the Marhabi family is experiencing exemplifies the pain of so many Yemenis today.

So, we reiterate our call for the Houthis to immediately release Levi, and stop their human rights abuses. And we ask that the international community also join us in that call.

Enough of the violence. And enough of the violations. It’s time for the Houthis to respond to the proposal for a nationwide ceasefire. And it’s time they respect their obligations under international humanitarian law, including obligations regarding the protection of civilians. Just look at what the continued conflict is doing to the country. Yemen faces the worst humanitarian emergency in the world. Over 16 million Yemenis – more than half of the country’s population – are in acute need of food assistance. So, we call on all parties to permit the free flow of both commercial and humanitarian commodities, including fuel, food, and medical supplies. And until we can end this war, the international community must step up to fund the humanitarian responses without delay. And we heard that from Mark Lowcock.

On the fuel shortage specifically, thank you to Saudi Arabia for contributing over $422 million in fuel grant support to the Republic of Yemen government aimed at providing electricity to the population. We ask Saudi Arabia to ensure this fuel is delivered as quickly as possible. The recent clearance of four fuel vessels in northern Yemen is a positive step in the short term, and we welcome the Yemeni government’s announcement of its intent to clear three additional ships. But these measures are not enough. We understand the urgent need for fuel to get into Hudaydah port. This is a constant priority in our conversations with the Yemeni government and with Saudi Arabia. But it’s critical that all parties – including the Houthis, who use fuel to fund their war effort – allow both commercial and humanitarian commodities to reach those who need them. Otherwise, the humanitarian emergency in Houthi-controlled areas will become unimaginably bleak.

Fortunately, I believe we have a real opportunity here. We can implement a ceasefire. We can pressure the Houthis to stop the violence and violations. And we can address the humanitarian crisis. This is a rare opportunity for progress. It will take all of us – all of us working together – to make this happen. And I hope we have the courage to do that.

Eid Mubarak to all of our Muslim colleagues, and to all Yemeni people.