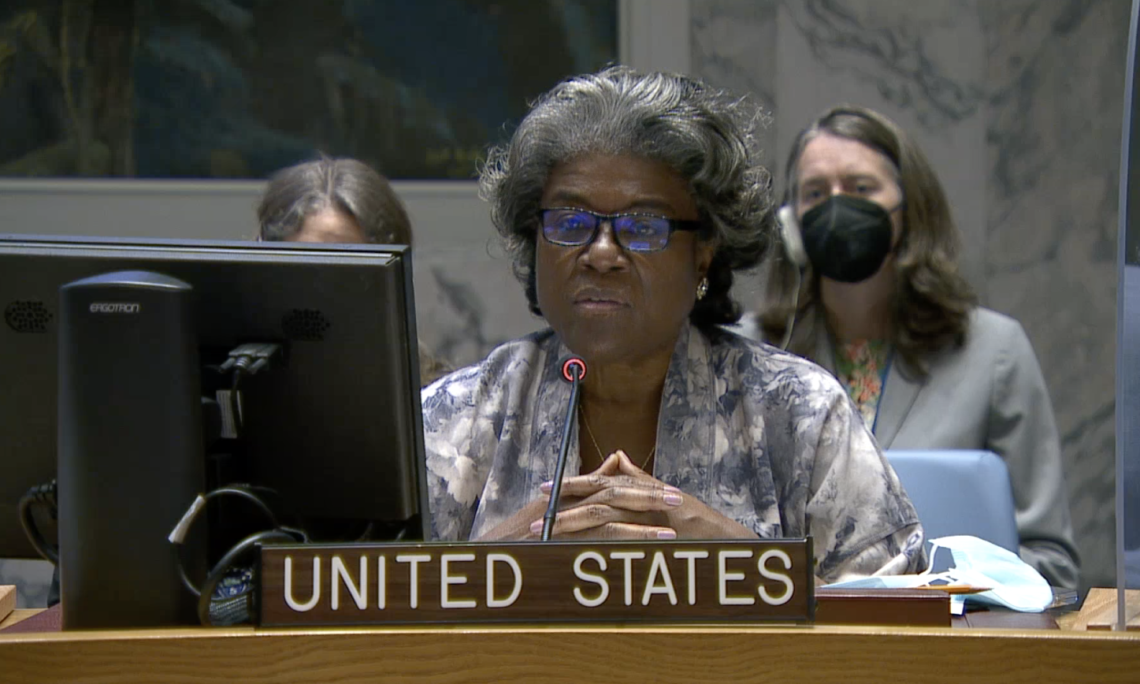 Thank you, Madam President, and thank you, Special Envoy Grundberg and Under Secretary-General Griffiths, for your briefing and your ongoing efforts.

Colleagues, we are witnessing a moment of hope for Yemen. An opportunity to finally bring peace to a country and a people that have suffered for far too long. Today, I will outline the progress we’re seeing on the ground and the work still ahead.

First, the United States applauds the parties’ public endorsement of Special Envoy Grundberg’s call for a two-month truce. This is a hopeful first step. Moving to a comprehensive ceasefire will require concerted efforts by the parties and the support of this Council to hold the parties accountable.

We also are encouraged by the Special Envoy’s visit to Sana’a – and hope this is another example of the peace process moving forward. And, crucially, there are indications that access to food and other supplies will increase – thanks to the movement of fuel ships into Hudaydah ports and preparations to resume commercial flights to and from Sana’a airport. The parties should continue to negotiate in good faith to discuss opening key roads to Taiz and other locations. Easing the flow of goods and people will reduce the suffering of millions of Yemenis.

The United States also welcomes the announcement of the formation of the Government of Yemen’s Presidential Leadership Council and of its support for the UN-negotiated truce and broader peace efforts.We support the Yemeni people’s aspiration for an effective, democratic, and transparent government that includes diverse political and civil society voices, including women and other marginalized groups. And we appreciate the recent GCC-hosted talks, which provided an opportunity for Yemeni-Yemeni dialogue.This has brought diverse members of Yemeni society together to discuss reforms and other initiatives that can strengthen governance, stabilize the economy, and improve the lives of Yemenis. And in doing so, the GCC-hosted talks can also help bolster the UN-led peace process.

This truce opens a window of opportunity for a long-term and sustainable peace – apeace that the people of Yemen desperately need. The parties should turn their efforts to securing a lasting end to fighting and participating in an inclusive UN-led political process. We urge the parties to adhere to their agreement to halt all offensive military operations inside Yemen and across its borders, and to freeze their positions on the ground.

Already, we are aware of troubling reports of continued ground fighting. We call for restraint and for the parties to work through the UN to address their concerns, rather than resorting to accusations in the media. A durable end to the conflict will require all parties to engage in order to reach a compromise. To choose dialogue over violence. That is the task ahead.

Colleagues, while there is cause for optimism, millions of Yemenis still suffer from the ravages of war. And Putin’s war of choice in Ukraine has made an already precarious food insecurity situation in Yemen even worse.The World Food Program’s March report identified Yemen as one of the countries most affected by wheat price increases and lack of imports from Ukraine. This is just another grim example of the ripple effect Russia’s unprovoked, unjust, unconscionable war is having on the world’s most vulnerable. Tragically, the World Food Program has already had to reduce rations for some of the eight million Yemenis who are food insecure. This is a moment for the world to step up.

We welcome the Saudi announcement of a $300 million contribution to the UN Humanitarian Response Plan. And the United States was pleased to announce a $585 million contribution just last month. Still, more help is needed as food shortages grow and prices rise. The UN appeal remains less than 40 percent funded. The United States urges all countries to contribute more before it’s too late.

We also applaud Saudi Arabia and the UAE for contributing $1 billion each to support the Central Bank of Yemen, and an additional $1 billion in Saudi support for fuel imports and development projects. It is imperative that these funds be dispersed promptly to help stabilize the economy and facilitate the implementation of projects that will benefit the people of Yemen. But make no mistake: economic support is not a substitute for humanitarian support and they are both essential to Yemen’s prosperity.

Finally, now is the time to defuse the ticking timebomb that is the FSO Safer. We are optimistic about the UN coordinated effort to address the situation, but the need for funding and regional cooperation is urgent. And we welcome last month’s signing of an MOU between the UN and the Houthis, which provide for the transfer of the Safer’s oil to a sound vessel on an urgent basis while a replacement export capacity is identified.In advance of a pledging conference in May, our Special Envoy for Yemen, Tim Lenderking, is traveling in the region with UN Resident Coordinator David Gressly to encourage financial and in-kind support for emergency efforts to avert a spill from the vessel.

We haven’t had this much momentum in Yemen in a long time. It is critical that we continue to help the parties seize this hopeful moment, preserve the gains being made, and lock in steps that can prevent a return to fighting. There is no military solution to this terrible conflict. There is only a political and diplomaticsettlement and the Yemeni people are counting on our support to achieve success.