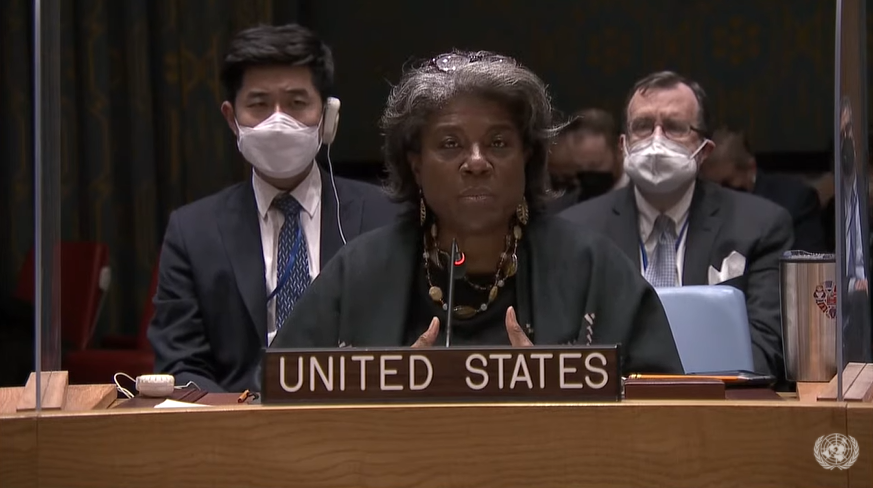 Thank you, Mr. President. And thank you, Secretary-General. Thank you for your strong stance and your powerful remarks today at the General Assembly and for your remarks tonight.

Colleagues, a few moments ago I spoke to President Biden, who asked me to convey in the strongest possible terms his – and our – steadfast support for Ukraine, and support for the urgent meeting this Council has convened tonight. Furthermore, he asked me to share that the United States, and our allies and partners, will continue to respond to Russia’s actions with unity, with clarity, and with conviction.

We are here tonight because we believe, along with Ukraine, that a full-scale, further invasion into Ukraine by Russia is imminent. Tonight we’re seeing the Russians close airspace, move troops into Donbas, and move forces into combat-ready positions. This is a perilous moment. And we are here for one reason and one reason only: to ask Russia to stop. Return to your borders. Send your troops, and your tanks, and your planes back to their barracks and hangars. And send your diplomats to the negotiating table. Back away from the brink, before it is too late.

Last week, the United States informed this Council – and the world – about what we expected to see unfold. We said that Russia would manufacture a pretext for an attack. We have since seen numerous false flag events staged along the lines of contact in Donbas.

We said Russia would theatrically convene emergency meetings at the highest levels of the Russian government. We all saw this on Monday, with the state-televised security council meeting held by President Putin – an orchestrated moment in which the Russian government decided to recognize as “independent states,” sovereign territory of Ukraine controlled by Russia’s proxies since 2014. They literally violated Ukraine’s sovereignty and territorial integrity on live television, before the world.

We said that false proclamations would come declaring Russia would need to defend Russian-speakers in Ukraine. We got that and much more from President Putin’s speech on Monday and during the speech of the Russian Ambassador in the General Assembly today. No one could have predicted just how dangerous, inciting, and far-reaching President Putin’s speech would be, with Putin arguing for taking the world back in time to an era of empires and colonies.

Finally, we said the attack would come next. That we could expect communications to be jammed, cyberattacks to shut down key Ukrainian institutions. Last week, we attributed to Russia denial of service attacks against Ukrainian banks, and we saw similar activity this morning targeting government sites, as well. And in the last few hours, we have received very concerning reports of destructive malware placed on hundreds of computers and executed on at least some.

After that, we said, would come the bombs and missiles, the soldiers and the tanks. Already soldiers have been deployed to the occupied region of Ukraine. Ladies and gentlemen, we are here tonight because we believe the rest is imminent.

Now, over the past few weeks, Russia has called our predictions “hysterical.” Russia said we were lying. Russia said we were supplying the world with misinformation. Russia’s diplomats even laughed in the face of the human suffering we were sounding the alarm about. But what we said would happen has come to pass, for all the world to see.

So let us be clear: “All parties” are not culpable here. There is no middle ground. Calling for both sides to de-escalate only gives Russia a pass. Russia is the aggressor here. Russia’s attack on Ukraine is tantamount to an attack on the UN and every Member State in the chamber tonight. The Security Council is charged with adjudicating threats to peace and security. Russia is bypassing it entirely and taking matters into its own hands. And that undermines the institution. It undermines everyone who participates in it.

The United States, Ukraine, its allies and partners across Europe, UN officials, every other member of this Security Council – we have all repeatedly implored Russia to engage at the diplomatic table. Those calls were not heard. Instead, tonight, Russia has brought its people, the Ukrainian people, and the world to the brink of a conflict that will produce an untold amount of human suffering.

I said it in the General Assembly this morning, and I’ll say it again tonight: everyday Russians should be asking themselves, right now, how many Russian lives Putin will sacrifice for his cynical ambitions.

Responsible members of this Security Council will stand together and we will stand with Ukraine. And we will do so despite a reckless, irresponsible, permanent member of the Security Council abusing its powers to attack its neighbor and subvert the UN and our international system. This morning in the General Assembly, we saw dozens of leaders from across the globe stand up to defend the UN Charter and Ukraine against Russia’s brazen attacks. We were proud to stand with them.

Today, I had the opportunity to meet with Ukrainian Foreign Minister Kuleba. And many of you were in the General Assembly Hall this morning when Foreign Minister Kuleba received enthusiastic and overwhelming applause after his remarks. Since he could not be here this evening, I would like to conclude by echoing his words. This morning he warned us all that, “No one will be able to sit out this crisis if President Putin decides that he can move forward with this aggression against Ukraine. Your governments and your people will face painful consequences together with our government and our people.”

He is right. History tells us that. And we must confront this threat head on, in this Council, in the UN, and in our capitals. The people of Ukraine are counting on us. Let’s not let them down.