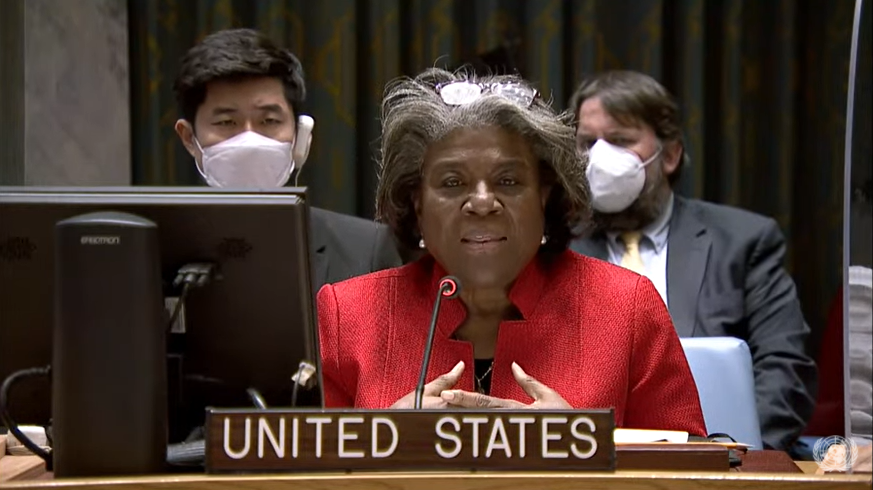 By the grace of God, the world narrowly averted a nuclear catastrophe last night. We all waited to exhale as we watched the horrific situation unfold in real time. I applaud the ability of the Ukrainian operators to keep all six reactors in safe conditions while under attack and to report, as they were able to, to their nuclear regulator. Moreover, we appreciate the State Nuclear Regulatory Inspectorate of Ukraine for its continuous updates to the IAEA and to the international community. We are gravely concerned that the Ukrainian operators are now doing their jobs under extreme duress.

Russia’s attack last night put Europe’s largest nuclear power plant at grave risk. It was incredibly reckless and dangerous. And it threatened the safety of civilians across Russia, Ukraine, and Europe. As a first step, we call on Russia to withdraw its troops from the plant to permit medical treatment for injured personnel, to ensure operators have full access to the site and are able to communicate with nuclear regulators, and to allow the operators to conduct shift changes to ensure the continued safe operation of the plant. Ukrainian firefighters and nuclear engineers must have full access to the nuclear facility to assess damage, particularly to water intake piping, and mitigate a further deterioration of the situation if needed.

Nuclear facilities cannot become part of this conflict. Reliable electricity is vital for the nuclear facility, as are back-up diesel generators and fuel. Safe transit corridors must be maintained. Russia must halt any further use of force that might put at further risk all 15 operable reactors across Ukraine – or interfere with Ukraine’s ability to maintain the safety and security of its 37 nuclear facilities and their surrounding populations.

The United States remains highly concerned that Russian military forces controlling the Chornobyl site have not permitted operators there to have a shift change since last week. This is highly irresponsible behavior and causes grave concerns for continued safe operations of both sites. And we call on all countries to support IAEA Director-General Grossi in his efforts to find arrangements going forward to ensure nuclear safety and prevent a nuclear catastrophe in Ukraine.

Over the past nine days, we have witnessed the devastating impacts of President Putin’s war of choice on the Ukrainian people. Yesterday, the UN reported that Russia’s invasion had turned half a million children into refugees. Russia has killed thousands of Ukrainians – and sacrificed thousands more Russian soldiers’ lives in the process. Russia is destroying critical infrastructure which is denying people drinking water to stay alive and gas to keep people from freezing to death in the middle of winter. The humanitarian impact of this destruction will be significant. A hundred forty-one nations across the world have called loudly and clearly on President Putin to stop this brutal, unjustified, unprovoked attack. Not only has he not listened, we’ve just witnessed a dangerous new escalation that represents a dire threat to all of Europe and the world.

We call on Russia to abide by its international law obligations. The world demands that Russia abide by international humanitarian law, which prohibits intentionally targeting civilians and civilian infrastructure, and allow humanitarian agencies full and secure access to people in need of aid. The United States and our partners have called for a briefing this Monday on the humanitarian situation in Ukraine. We support the urgent work by humanitarian organizations on a humanitarian pause to allow for safe passage and the delivery of humanitarian supplies.

President Putin must stop this humanitarian catastrophe by ending this war and ceasing these unconscionable attacks against the people of Ukraine. Mr. Putin must stop this madness and he must stop it now. Cooler heads must prevail. Russian forces are now 20 miles, and closing, from Ukraine’s second largest nuclear facility. So, this imminent danger continues. We narrowly avoided a disaster last night. The international community must be unanimous in demanding Russia’s forces stop their dangerous assault. And as I’ve said before, the people of Ukraine are counting on us and we must not let them down.