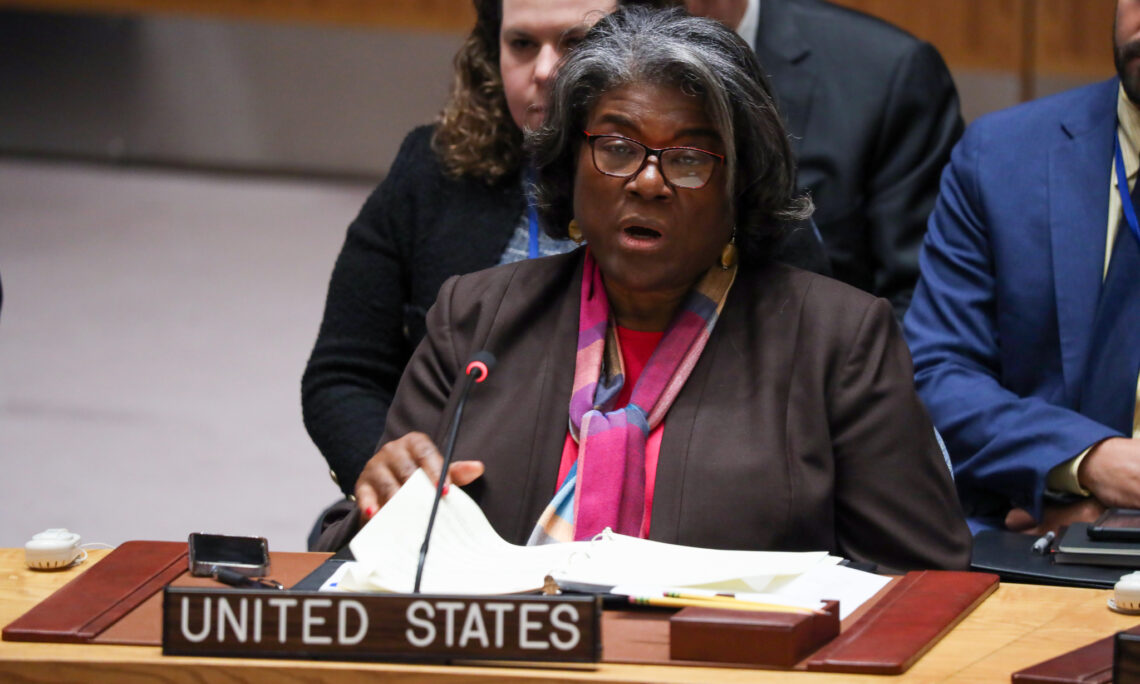 Thank you, Mr. President. And thank you, Assistant-Secretary-General Khiari, for your informative briefing.

Over the last week and a half, the DPRK has exacerbated an extremely worrisome trend that we have seen all year: An increased number of launches, in flagrant violation of the Security Council resolutions, destabilizing and threatening rhetoric, and continued escalations.

The United States condemns in the strongest possible terms all 13 recent DPRK ballistic missile launches since October 27. But the DPRK’s latest test of an intercontinental ballistic missile – the seventh ICBM this year – is particularly concerning. As is the unprecedented impact of a ballistic missile just about 50 kilometers – or 30 miles – from the Republic of Korea’s shoreline.

This is about more than just advancing the DPRK’s unlawful military capabilities and undermining the global nonproliferation regime. This is also about the DPRK trying to purposely raise tensions and stoke fear in its neighbors.

So let me be clear: These actions are not actions of a responsible State. The DPRK has now launched a staggering 59 ballistic missiles this year. That’s right – 59. For a UN Member State to so flagrantly violate the Security Council resolutions, and all that the UN Charter stands for, is appalling.

Equally appalling is the Council’s deafening silence on this issue. Thirteen Council members have joined in condemning the DPRK’s unlawful actions since the beginning of the year. And thirteen Council members have joined in voting to impose costs on the DPRK that would impede its unlawful weapons of mass destruction and ballistic missile pursuits, while seeking new avenues to improve humanitarian assistance to the country’s people.

The DPRK, however, has enjoyed blanket protection from two members of this Council. These members have bent over backwards to justify the DPRK’s repeated violations. And, in turn, they have enabled the DPRK and made a mockery of this Council. This cannot stand. The risks to the region and the world are simply too great.

I want to remind this Council of our responsibility to protect global peace and security, defend the global nonproliferation regime, and uphold Security Council resolutions. You don’t get to abandon Security Council responsibilities because the DPRK might sell you weapons to fuel your war of aggression in Ukraine, or because you think they make a good regional buffer to the United States.

In contrast, just last month, the DPRK said its flurry of recent launches were the simulated use of tactical battlefield nuclear weapons to “hit and wipe out” potential U.S. and Republic of Korea targets. The DPRK is simply using this as an excuse to continue to advance its unlawful programs.

Even in the face of the DPRK’s escalations, the United States remains committed to a diplomatic solution. We have conveyed to the DPRK our request to engage in talks at all levels of our government. Despite a lack of engagement from Pyongyang, we will continue to pursue meaningful dialogue. We call on the DPRK to abandon its provocative behavior and at long last turn to diplomacy.

Colleagues, the credibility of this Council is at risk. The security of every UN Member State is at risk. We must fully implement the relevant Security Council resolutions necessary to impede the DPRK’s weapons of mass destruction and ballistic missile advancements. Full implementation includes holding the DPRK accountable for its violations of these resolutions, as we unanimously committed to do in Resolution 2397 following an ICBM launch.