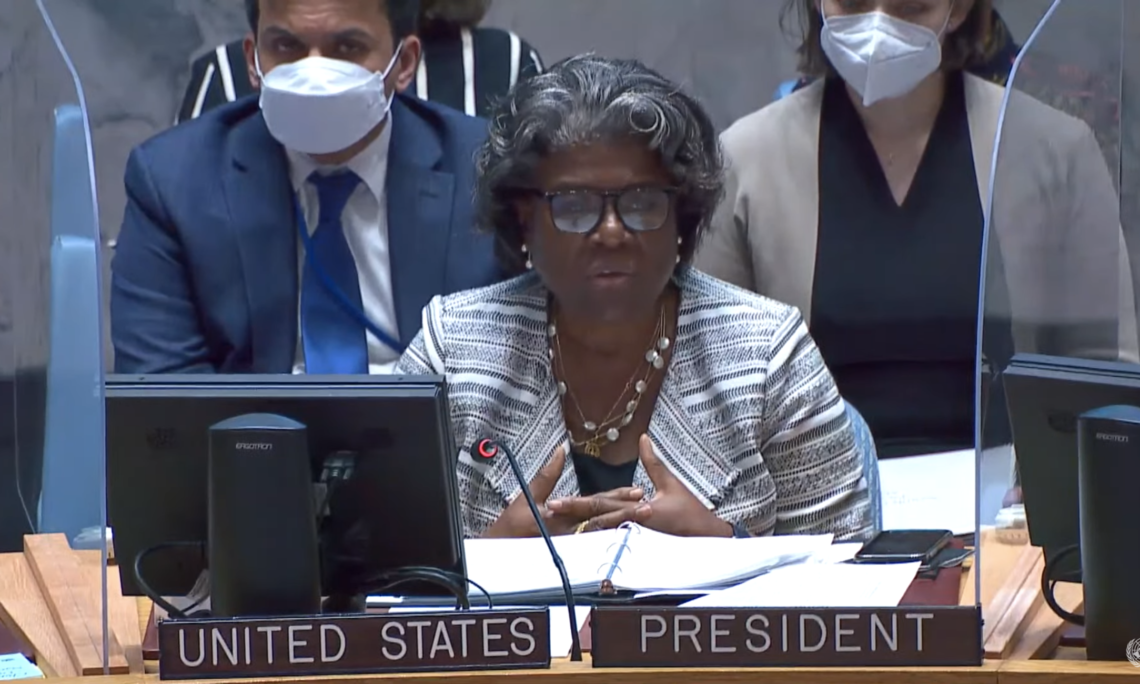 Under-Secretary-General DiCarlo, thank you for your briefing. Your remarks made clear, new technologies are already playing a critical role in the UN’s peacekeeping efforts, and it is essential that they are used in a constructive manner. Ms. Nyabola, thank you for your invaluable perspective on both the benefits and the challenges human rights activists and civil society face from the potential use, as well as the misuse, of these technologies. And Mr. Druet, thank you for sharing the ways digital technology can be used to support the work of our peacekeepers, while its misuse can also undermine them. Let me be sure to maximize the former and minimize the latter.

Colleagues: this briefing is about an enormous opportunity and a pressing challenge. The opportunity is for the Security Council to harness the power of digital technology to advance peace and security – to responsibly use these tools to do enormous good in the very conflicts and contexts where they are doing harm.

After all, these technologies have immense potential to support the good work of the UN system around the world. Social media tools and messaging applications can facilitate access to lifesaving information prior to and during conflict. Data from satellites can identify risks from climate change, provide critical information to peacekeepers, and improve emergency communications during conflict and natural disasters. We can identify and stop famines before they start. We can find homes and housing and jobs for refugees. We can better protect our peacekeepers and those they are mandated to serve. But we also have to address a pressing challenge, which is the way digital technologies are being misused to restrict human rights and fuel conflict.

In the hands of state actors, and in some cases non-state actors, these technologies are being used to cut off access to information, suppress freedom of expression, and spread disinformation, thereby escalating conflict — undermining the foundational values of the UN Charter that we are charged with upholding.

In the Central African Republic and Mali, disinformation targeting UN peacekeeping missions has threatened peacekeeper safety and security and has undermined the missions’ ability to protect civilians. In Ethiopia, authorities cut off internet access in the Tigray region since November 2020 as conflict erupted between the Ethiopian National Defense Forces and regional forces in Tigray.

These actions hamper the ability of civilians to access health services, delay documentation of atrocities and human rights abuses, disrupt financial services, and restrict family members from connecting virtually to loved ones. Countries sitting at this very table are also using technology to harass, arbitrarily surveil, censor, and repress civil society and independent media as never before.

Nowhere is this more evident than in Russia’s war of choice against Ukraine. The Russian government continues to shut down, restrict, and degrade Internet connectivity, censor content, spread disinformation online, and intimidate and arrest journalists for reporting the truth about its invasion. These practices are as wrong as they are widespread. And as you’ve already heard from Ms. Nyabola, the NGO “Access Now” estimates that in 2021 there were 182 internet shutdowns in 34 countries. Even more troubling, we often hear claims that such actions are taken in the name of protecting peace and security. And nothing could be further from the truth.

We also continue to see non-state actors, including terrorists and violent extremists, use online communications platforms to recruit, radicalize, and mobilize to violence. All of us who are committed to addressing and preventing conflict worldwide must do our part to ensure technologies serve as a force for positive change, and not as a tool misused to perpetrate human rights abuses, fuel hatred, and exacerbate conflict.

That is why the United States is working with civil society, the private sector, and other stakeholders to advance this global effort. For our part, we are calling out the use of partial and complete Internet shutdowns, censorship, and other tactics to prevent the exercise of freedom of expression online. Following on the Summit for Democracy, we are continuing to join forces with our partners in the Freedom Online Coalition to protect Internet freedom and ensure that entire digital ecosystems respect international human rights frameworks. We know that surveillance tools and other dual-use technologies can be misused to threaten human rights defenders and others. That’s why we are using export controls to hold companies accountable that develop, traffic, or use spyware and other technologies that enable this malicious activity.

We’re working through the United Nations and other fora to champion the framework of responsible state behavior in cyberspace, which makes clear that international law applies to states’ cyber activities and lays out a set of voluntary norms to guide their behavior in peacetime. We are also standing together with countries around the world to protect against and respond to malicious cyber activities.

Across the globe, gendered forms of online harassment and abuse, including disinformation campaigns against women leaders, are disrupting women’s equal participation in decision-making on matters of peace and security. We have to work together to combat misinformation and disinformation globally. The UN is already playing a key role to produce transparent and easily accessible information and advocate on behalf of journalists on the frontlines.

And we also need to embrace the opportunities to unlock technology’s latent potential for advancing peace and security. So last month, a group of 60 global partners launched the Declaration for the Future of the Internet to revitalize a democratic vision for the global Internet. We invite all relevant authorities and UN member states that are committed to upholding the Declaration’s principle to join us.

By United States Mission to the United Nations | 23 May, 2022 | Topics: Highlights, Remarks and Highlights