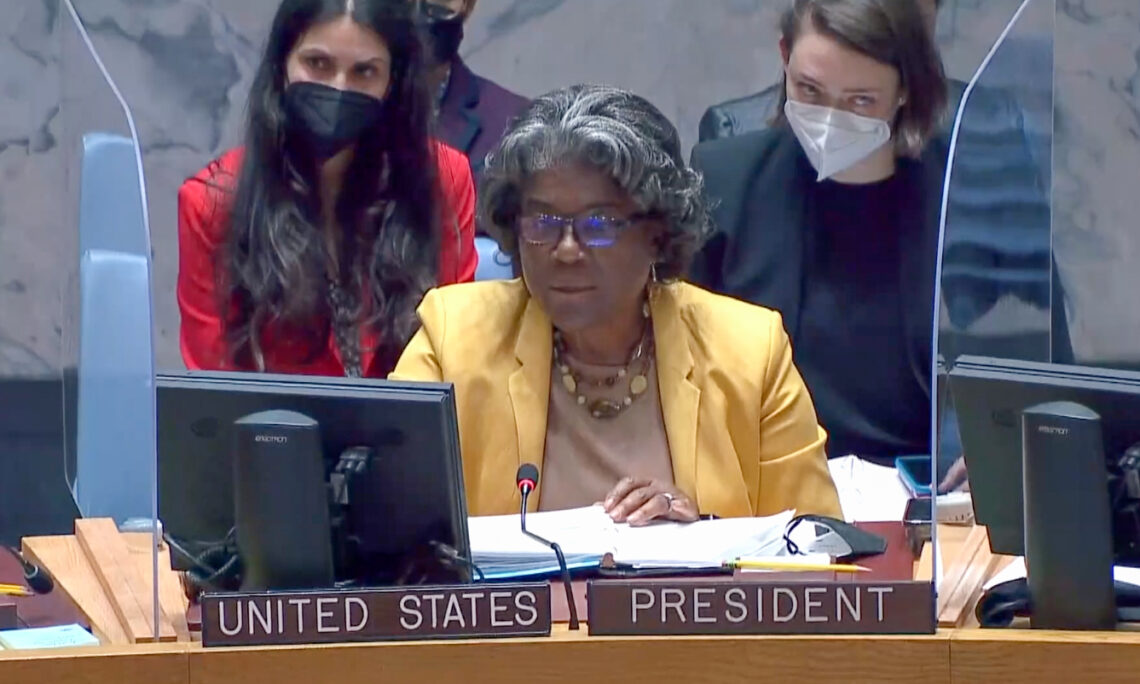 Let me start by thanking you, Director Rajasingham and Director-General Mardini, for your briefings today. I also express my deep appreciation to our civil society speaker, Rachel Boketa with Women for Women International and David Miliband with the International Rescue Committee. Thank you, Mr. Miliband, for your clear and practical list of solutions for providing much-needed humanitarian access. And thank you Ms. Boketa for raising the different ways that women and girls, men and boys, are harmed when humanitarian access is impeded – an issue that is too often ignored. And I very much appreciate your sharing the real-life stories of Solange and Cinama, and the impact that your programs are having on their lives. I also want to thank you, Mr. Mardini, for sharing the perspectives of ICRC and your recommendations to this Council. The United States so appreciates all the work the UN, ICRC, NGO partners on the ground do to protect civilians in armed conflicts. You know, and we appreciate, that you are all lifesavers.

Colleagues, we hear new reports of civilians under threat every single day. The reports come from every corner of the globe, from a musician in Mali, who told The Washington Post earlier this week about the slaughter of at least 300 civilians by the Russian-backed Wagner forces to the UN High Commissioner for Refugees, who told the world on Monday that for the first time ever, more than 100 million people have been forcibly displaced.

To make matters worse, killings, forced displacements, and lack of humanitarian access often come together and create a downward spiral. As just one horrific example, in the Democratic Republic of Congo, more than 5.6 million Congolese remain displaced and as we heard from you Rachel – your number was higher – that this was one of the largest in the world. And the ceaseless fighting has severely limited humanitarian access. Over 10 months in 2021, at least 260 separate incidents directly affected humanitarian workers or supplies. Nearly sixty workers were killed, injured, or kidnapped during this period.

Humanitarian workers were similarly attacked in South Sudan, when three aid workers as part of a World Food Program convoy, were killed on March 24. The killings make it harder to deliver humanitarian aid, and the lack of aid makes it more likely that civilians will stay displaced. The result of the vicious cycle is what we see in Syria, where after 11 years of the Assad regime’s brutal war, 14 million Syrians rely on humanitarian assistance and 6.6 million Syrians remain internally displaced in the country.

Every month, Syrian civilians are attacked and killed by the Assad regime and others. And hospitals often don’t have the medicine or supplies to help the injured because humanitarian convoys aren’t able to reach them. And the people of Ukraine are also in need of dire humanitarian assistance, as countless civilians continue to be injured or killed by Russia’s brutal war of choice. We’ve seen images of mass graves. We’ve seen images of destroyed buildings. We’ve seen credible reports of individuals executed; bodies showing signs of torture; and horrific accounts of sexual violence against women and girls, as well as boys and LGBTQ+ persons.

This month, the UN Human Rights Monitoring Mission in Ukraine announced it has evidence of at least 300 unlawful killings of civilians – including children – since Russia’s forces withdrew from areas north of Kyiv. Yesterday, we saw credible media reports of Russian forces stealing grain from Ukraine – as its war has exacerbated a global food security crisis. The impact has been particularly devastating on children in the region and across the world.

For these reasons, we call on the Secretary-General to add Ukraine as a ‘situation of concern’ in the upcoming annual report on children and armed conflict. There will be justice and Russia will be held accountable for these atrocities. Our charge, to maintain international peace and security, means we have an obligation – we have an obligation to address all of these threats to civilians in armed conflict. States and non-state parties to conflict alike have obligations with regard to the respect and protection of civilians, including humanitarian workers, as well as equipment and goods that are not for military purposes.

But as the Security Council, we also have a duty to do whatever is in our power to protect civilians caught in the throes of conflict. And perhaps the most immediate, powerful, and practical way we can help civilians is by providing and safeguarding humanitarian access. After all, we can raise all the funds and donate all the food and medical supplies in the world, but it won’t matter if it doesn’t get to those in need.

The Security Council has the power to forge paths for humanitarian access where it is most desperately needed. We did this last year, when we unanimously voted to renew the mandate for UN cross-border assistance in Syria. That was an important, lifesaving decision for millions of people. It demonstrated the best of what we can do when we work together. But now, the UN estimates that 14.6 million Syrians need humanitarian assistance in 2022, a nearly 10 percent increase over last year.

So, we have to renew the mandate again – and we have to expand it and increase the number of crossing points to meet the rising demands for humanitarian aid in Syria. I look forward to traveling to Bab al Hawa crossing soon and seeing the current needs on the ground with my own eyes.

This year’s report shines a spotlight on another critical impediment to the protection of civilians: disinformation. For example, in the Central African Republic and Mali, disinformation targeting the UN has seriously threatened peacekeepers’ safety and security, and has undermined the ability of the UN to reach civilians and to protect them. We must ensure that the UN has the capabilities it needs to counter disinformation that impedes the work that it has been charged to do.

Colleagues, every year this annual debate is sobering, but this year it is especially so. Fortunately, the steps are clear. As our briefers outlined, there are practical steps we can take, right now, to protect civilians. We know exactly how we can provide humanitarian access and break the cycle of despair. So, let’s just get it done.

By United States Mission to the United Nations | 25 May, 2022 | Topics: Highlights, Remarks and Highlights