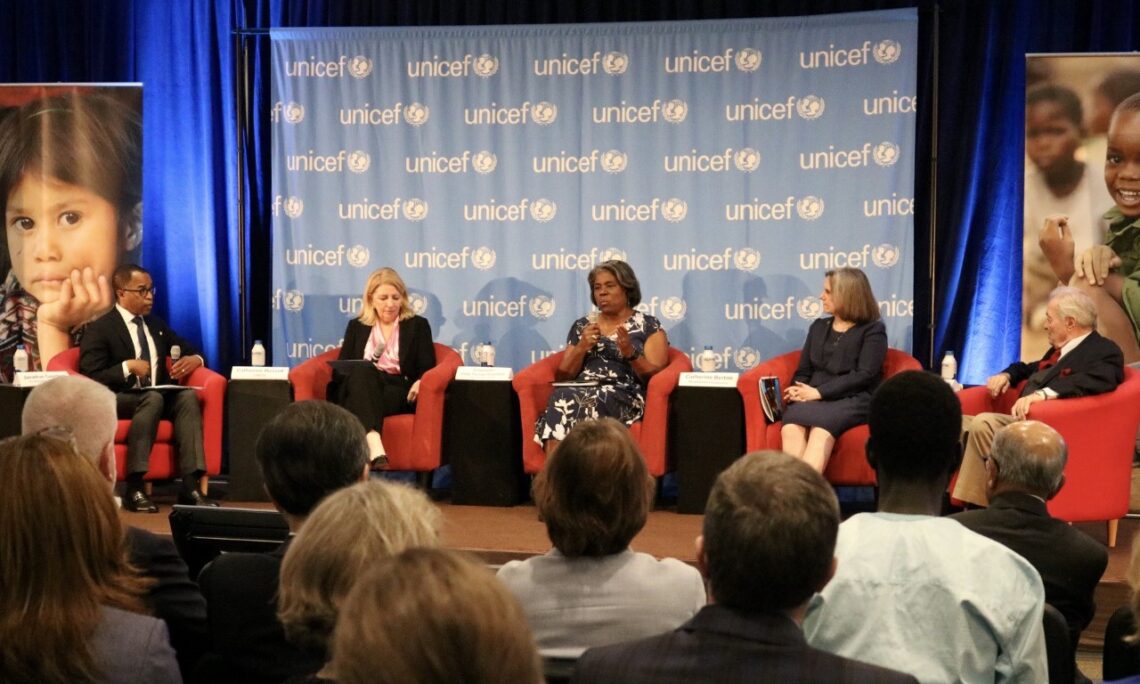 Thank you so much, Cathy and good morning to all of you. I’m really delighted to be here with you today. And Johnathon, thank you so much for joining us. Thank you, Cathy, and thanks to the UNICEF team for co-hosting this really crucial event on conflict, hunger, and children.

And I’m so honored to be at UNICEF House today with such a committed and passionate set of panelists, community members, NGOs, my colleagues from the diplomatic core – all of you who work on the frontlines of this issue. And I especially want to recognize and thank Chef Pepin for being our guest today and for you offering your unique perspective on these issues.

Today the United States is kicking off several days of action at the UN to address food insecurity across the globe. Tomorrow, Secretary Blinken, as you heard, will come to New York to chair a Global Food Security Call to Action Ministerial Meeting. And on Thursday, I’ve invited him to chair an Open Debate in the Security Council, and for the second year in a row, we plan to use our Security Council presidency to focus the world’s attention on the nexus between conflict and food security. And while this crisis has been around for some time, having hosted this similar event last year, it has been made worse by Russia’s war against Ukraine. Their blockade of ports not allowing food and wheat to leave Ukraine, their efforts to keep farmers from planting their farms, their attacks on food silos; all of this has contributed to an already dire situation as it relates to food insecurity.

Ladies and gentlemen, we have a moral obligation to act. We cannot look away from the millions who are worried about where they’ll find their next meal or how they’ll feed their families. This is especially true when it comes to children, who are most vulnerable to malnutrition and food insecurity and rely on others to meet their nutritional needs. The first time I encountered a starving child – and Cathy I’d never heard the word wasting – this was more than thirty years ago. I was visiting a Sudanese refugee camp in Uganda and the doctors on site were trying to treat a two-year-old girl with severe malnutrition. But before they could do anything, she died. And she died in front of all of our eyes, a death that was so unnecessary. And it is seared in my mind forever. I’ve never forgotten that. It was the first time I’d ever watched someone die. And to die of starvation – just so unnecessary.

But unfortunately, this is far from unusual. The technical term for it is severe acute malnutrition, now wasting. Globally, it accounts for one in five deaths among children under five and it is the top killer of children in the world. Starvation – when we have so much abundance of food around the world. No one, no child should die from hunger. So, today’s event is really personal for me. I know that it is personal for many of you here in the room. And I believe that it must be an imperative for the world.

This week, UNICEF is sounding the alarm again on rising global food insecurity among children. Conflicts and climate-related emergencies are rapidly increasing the number of children affected by food insecurity across the globe. Their call to action is sobering and it cries out for committed action.

We all have a role to play. And for our part, the United States has committed more than $2.3 billion in new funding for humanitarian emergency assistance to meet global needs since February. Earlier this year, we committed to investing $250 million to boost fertilizer production – a commitment President Biden doubled last week to $500 million.

The United States is the world’s largest donor to UNICEF and the World Food Program, and we will continue to be a committed partner to UNICEF and other UN agencies and humanitarian partners working to save the lives of children around the world. But we know that there is more that we and others can do. That’s what today and our days of action is all about, and we are eager to work with all of you to see this through.