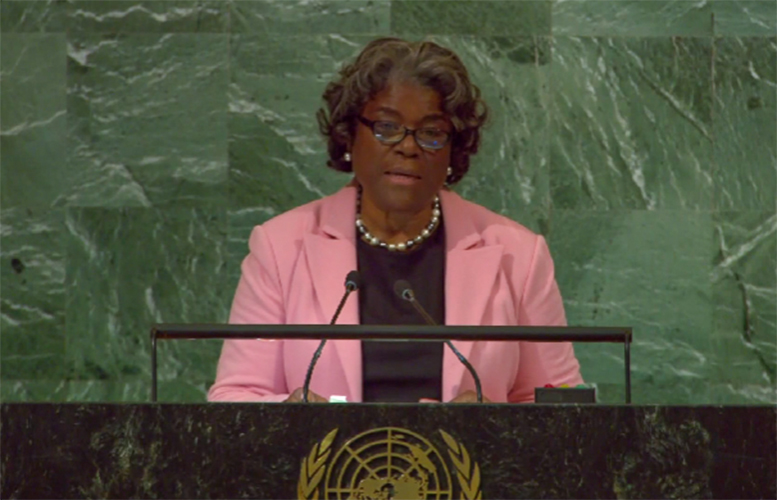 Colleagues, the United Nations, as an institution, is being tested. The question before us is whether we will defend an outdated status quo – or reform the Security Council and empower the UN to take on the challenges of the 21st century.

The United States believes, to our core, that we must move forward together. And we stand ready to engage widely with Member States to make the Security Council more effective, representative, and credible. As President Biden announced during this year’s General Debate, the United States supports the expansion of the Security Council in both permanent and non-permanent categories, including new permanent seats for countries from Africa and Latin America.

The Security Council needs to better reflect the world and geographically diverse perspectives. But for the Security Council to meet this moment, all permanent members of the Security Council must also live up to our obligation to maintain international peace and security. And that means exercising the veto authority responsibly. As I’ve said before, the United States will refrain from use of the veto except in rare, extraordinary situations.

We also believe that when a permanent Member State does use its veto, they should have to defend their actions to the General Assembly. In this context, we strongly supported, and were proud to co-sponsor, an initiative by a group of forward-leaning countries – spearheaded by Liechtenstein – that requires the General Assembly to convene a meeting after any veto has been cast.

This is a meaningful step forward, and one that increases accountability and transparency. And make no mistake: Any permanent member that exercises the veto to defend its own acts of aggression against another UN Member State must be held accountable. If we fail to do so, we undermine the very credibility of the UN Charter.

And that’s why, this year, the General Assembly has overwhelmingly condemned, in the strongest terms possible, Russia’s further aggression and violation of Ukraine’s sovereignty. In doing so, we have reaffirmed Ukraine’s independence, unity, and territorial integrity. And we have made clear that the Russian Federation must immediately, completely, and unconditionally withdraw its forces from Ukraine.

Colleagues, achieving the reforms we so desperately need will not be easy and will not happen overnight. But we must take up this work in earnest. The United States looks forward to continued and fulsome engagement through established channels and discussions on reform, including through the Intergovernmental Negotiations process.

We extend our sincere gratitude to former IGN co-chairs Denmark and Qatar for their extraordinary efforts during the 76th session of the General Assembly. Their work helped foster important and constructive discussions on Security Council reform.

And we thank incoming IGN co-chairs Kuwait and Slovakia for answering the collective UN memberships’ call for change. We look forward to engaging with you both and the broader UN in the months to come.