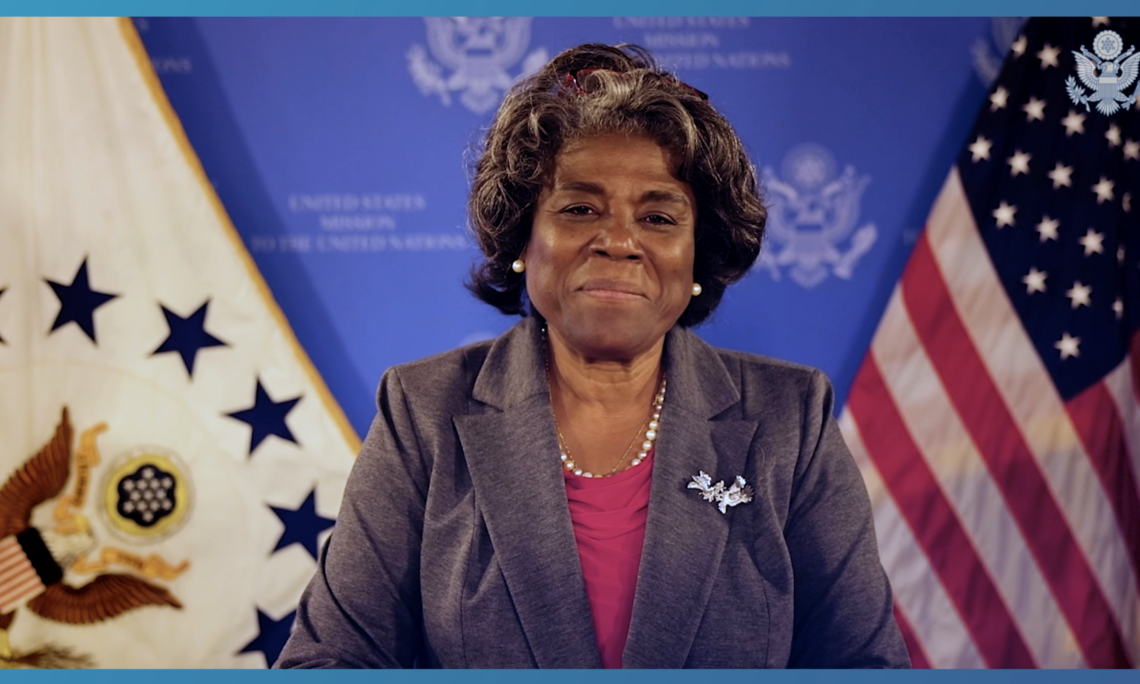 Hello. My name is Linda Thomas-Greenfield, and I have the honor of serving as the U.S. Representative to the United Nations. I so appreciate the chance to take part in this inaugural conference of the U.S. section of the Scholars at Risk Network. And I am proud that a terrific HBCU in my home state of Louisiana, Xavier University, is this year’s host.

To all the leaders and advocates from SAR member universities and educational associations across the country: thank you. Thank you for all you do to give scholars the opportunity to continue teaching and advancing their academic pursuits. Thank you for your tremendous advocacy on behalf of educators who are under attack and for shining a spotlight on those who stop scholars from doing their jobs. And thank you for your efforts to bring researchers, academics, and students together to drive this work forward as you are doing today.

To me, this work is personal. Because while I’ve spent most of my career in the diplomatic arena, my professional life started in the classroom. Before this job, I taught at Georgetown. Before I started in the Foreign Service in 1982, I was a professor of political science at Bucknell. And before any of that, I was a student and the first in my family to go to college. When I got on a plane to go to graduate school at the University of Wisconsin-Madison, it was my first time ever leaving Louisiana. My professors ignited my interest in African Affairs and opened up the world to me. They made an indelible mark on my life.

Academic freedom should be enjoyed by everyone, everywhere. But for too many, this freedom is still out of reach.

In Afghanistan, the Taliban’s repressive policies are denying young girls and women the chance to attend schools and universities and get the education they deserve. And in Ukraine, Russian bombs have hollowed out playgrounds. So many Ukrainian students spend their days in bunkers, not classrooms. When I was in Kyiv last month, I met one of those students. Her name was Milena. She was just 10 years old. Milena asked me to do everything in my power to end the war. I promised I would. And, in turn, I asked her what she wanted to do when the war was over. Her answer was simple: She wanted to go back to school and see her best friend again.

In every conflict and in every country where education is under attack, from Ethiopia to Syria to Yemen, we have a moral responsibility to speak out and, whenever possible, to give scholars and students a chance to continue their studies in safer environments. At the same time, we must continue to do an honest accounting of the challenges our own students and scholars face. In 2022, 30 HBCUs faced bomb threats. And too many people who identify as women or LGBTQ+ and those from religious minority groups don’t feel safe on their campuses. So, while the U.S. is a beacon for academic freedom, our work is unfinished. We must stamp out all forms of hate.

You know, I often think about what humanity would have lost had groundbreaking scientists like Albert Einstein not been able to flee persecution. Think about the innovative American products that never would have been dreamed up and the American companies that grew to launch them. It’s hard to imagine a world where we couldn’t look up any piece of information within seconds, but had Google co-founder Sergey Brin not escaped anti-Semitism in the Soviet Union, that might be our reality.

Or consider my dear friend and mentor, Madeleine Albright, who passed away earlier this year. Madeleine fled Nazi invasion and Communist oppression and came to the United States as a refugee. But from humble beginnings, she reached heights that no woman had ever attained before, becoming the first woman to serve as Secretary of State. Like me, Madeleine’s career started in academia. And even in her later years, she continued to teach at Georgetown University. Her legacy is carried on by all those she taught.

And of course, there’s President Obama whose father was selected for a special program to attend college in the United States. Without that, we would never have had our 44th President.

These are a few stories that speak to the transformative impact of academic freedom. But we know that thousands upon thousands of lives have been changed by your work. Your enduring commitment to the world’s scholars is making a real difference. It’s an inspiration. And I want you to know you have an unwavering partner in me, my team, and the entire Biden Administration.

Academic freedom is a right everyone should enjoy.

When you impede on educational pursuits, you not only deny your own citizens their liberties – you also deprive the world of the knowledge, the insights, the life-altering advancements they could contribute. So, let’s keep working together. Let’s keep defending academic freedom and independent thought. And let’s do everything we can to build a more open, more equitable, more just future for us all.