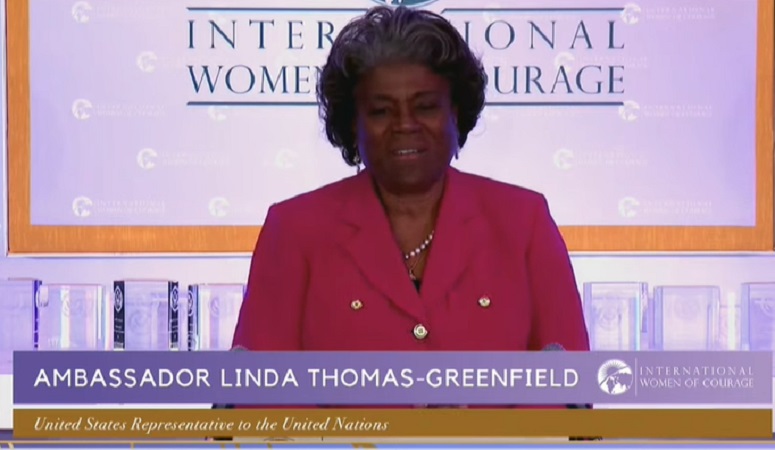 Good morning and thank you. It’s really an honor to be here. And I’m so grateful to be here with First Lady Dr. Biden, Secretary Blinken, and the State Department for hosting this inspiring event.

Most of all, I am in awe of the heroines we are here today to celebrate. You are activists and journalists, peacemakers and parliament members. You are prosecutors fighting organized crime and corruption. You are community leaders bravely testifying against gang leaders. You are defenders of the environment, of indigenous rights, of LGBTQI+ rights, of human rights. You have shut down sexual harassment and lifted up the next generation of women leaders. You listen. You lead. And you show courage beyond belief.

Of course, far too many courageous women are not able to be here, and that includes one of our honorees, Pham Doan Trang, who is imprisoned in Vietnam for her work to protect human rights and promote political participation. And then there are the tens of thousands of other women – too many to count – who demonstrate unimaginable bravery in the face of impossible cruelty each and every day.

And then there are the women and girls in Afghanistan, who are being excluded from schools and jobs after decades of progress. Or the women and girls in Ethiopia, who are being subjected to rape as a weapon of war. These are all our sisters. You are here to represent them, and all the women facing such grave challenges throughout the world. And it is on us – all of us here in this room and across the world – to do right by them.

For our part, at the United Nations, today marks the opening of the 66th Session of the Commission on the Status of Women – it’s a massive, annual session where the world’s governments come together to advance gender equality and the empowerment of women. And this year we’re paying particular attention to the role of women in the climate crisis – both how women and girls are acutely affected and how we are poised to lead the way forward. I was proud to announce our diverse delegation to CSW today, which will champion our values and the full, equal, and meaningful participation of women, girls, and gender-diverse people on all fronts. They understand – just as you do – how important it is that we speak up for those who are not in the room.

Our keynote speaker, Foreign Minister Dr. Najla Mangoush, is also about to do just that for us. She became the first female Foreign Minister of Libya almost exactly a year ago today, right around the same time I became the Ambassador to the United Nations. During Libya’s 2011 revolution, she headed the National Transitional Council’s Public Engagement Unit – dealing directly with Libya and the world’s civil society organizations. She is an expert in, and a practitioner of, conflict resolution, which she studied as a Fulbright Scholar and then as a Ph.D. student here in the United States, before becoming an assistant professor of law at Benghazi University. But more powerful than any degree or title, Foreign Minister Mangoush embodies stalwart bravery in the face of harassment and threats, sexism, and violence. And while men make war, she seeks peace. And I know she is proud to speak on behalf of all of the IWOC recipients today.

And with that, it’s my privilege to introduce our keynote speaker, Foreign Minister Dr. Najla Mangoush.