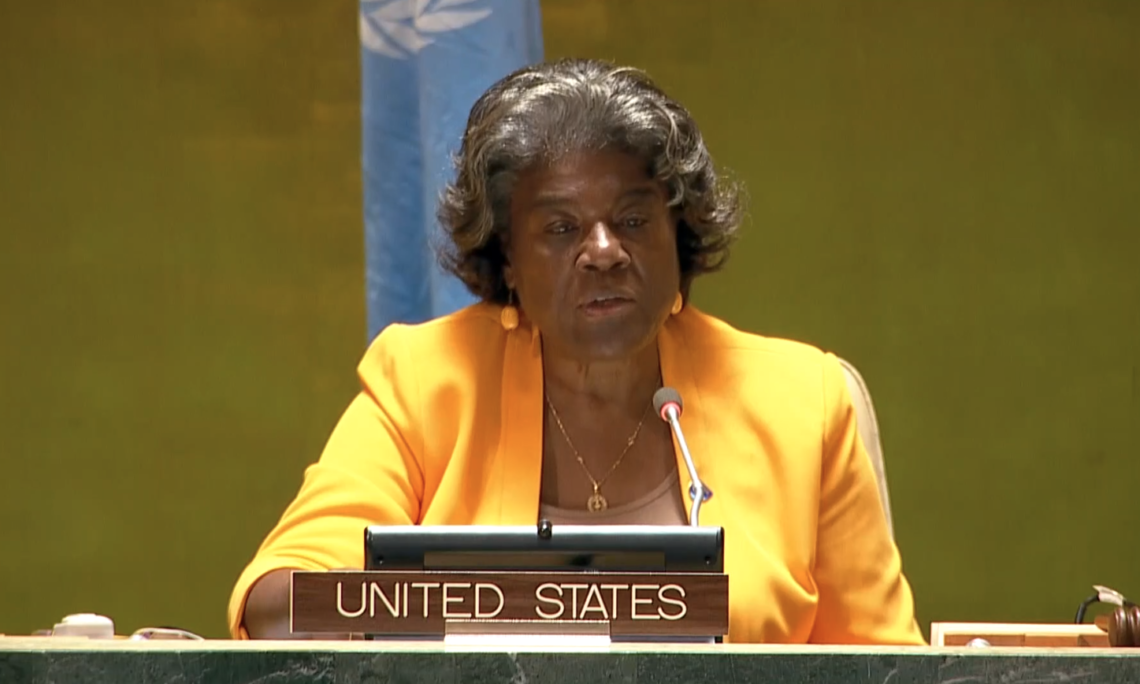 Thank you and good morning. Let me start by thanking the Department of Peace Operations for bringing us together this morning. It is really a pleasure to be together in person after two years where COVID-19 prevented us from convening the UN Chiefs of Police Summit. And I have to tell you, as I look out in this room and see all of the women and men in uniform, I feel particularly confident about our safety here this morning.

So much has changed since we last met: From the global pandemic to the global food crisis exacerbated by Russia’s war in Ukraine to urgent conflicts and humanitarian crises that have sprung up around the world. But despite all this change, the mission and the dedication of UN Police has remained the same: to help restore, establish, or strengthen the rule of law in places where it has broken down due to complex emergencies and conflict.

For over 60 years, UN Police have deployed around the world to implement critical policing tasks required by UN mission mandates. They have helped host countries carry out policing functions, investigate crime, and protect civilians. And they have helped local law enforcement operate independently and adhere to the human rights principles and the rule of law.

The United States is proud to be a strong supporter of all of this work. Since 2010, we have contributed over $80 million around the world to help police prepare for deployments to UN missions. We continue to provide capacity building support and strengthen the training, policies, and procedures that serve as the foundation for police peacekeeping.

The results speak for themselves. The efforts of UN Police have been critical to the transition of UN missions in many countries. And that includes Liberia, where as U.S. Ambassador I saw firsthand how UN Police contributed to laying the foundation for successful post-conflict transition.

Still, grave challenges remain. On my most recent trip to Ghana, I met with members of the Ghana Police Service, and they told me about the daunting challenges that the UN Police officers and Formed Police Units face today, including how disinformation and misinformation about UN peacekeeping operations increase the risk to peacekeeper safety and security.

Already this year, sadly, three UN Police peacekeepers have lost their lives in the line of duty. And we pay tribute to those women and men who gave their lives in service of trying to bring about a more peaceful world. I was present for one of these moving tributes in Mali during my trip to Bamako with my Security Council counterparts last year.

As Security Council Resolution 2589 makes clear, there must be accountability for all acts of violence – fatal and otherwise – against UN peacekeeping personnel. We must also ask what additional capabilities and training Member States can provide to help UN Police be better equipped to respond to increasingly dangerous environments.

To that end, the United States is proud to be working alongside the UN Police Division, the UN Integrated Training Service, and with other Member States on a review of the pre-deployment training for Formed Police Units. Additionally, the United States is proud to have been a co-sponsor of the sixth Formed Police Unit trainers course in Türkiye in 2021.

The best way to keep peacekeepers safe is to promote their effectiveness. It is our shared responsibility to ensure that they have the tools they need – including the Integrated Peacekeeping Performance and Accountability Framework – are implemented in a fair and thorough way, and that the performance data from in-mission assessments is appropriately shared and analyzed to address common challenges.

And let me be clear: There must be continued implementation of a zero-tolerance policy for sexual abuse and misconduct.

Finally, I want to talk about the critical role that women play in all of this work, and I appreciate the comments that were made by the Under-Secretary-General on the progress that has been made in this area. Because we know that police peacekeeping units with greater gender representation are more effective.

And as I look around this room and look at the number of women peacekeepers in this room, I’m a bit disappointed because I think there could be more. And we should work on ensuring that there are more peacekeepers because we would all be safer if there were more women peacekeepers. Studies have shown that the presence of women peacekeepers promotes community trust and increases the mission’s ability to engage with women and girls – groups that we know are disproportionately impacted by conflict.

The good news is that women now head, as you heard, five out of nine police components in peacekeeping operations. And that is real progress. Now, to meet the UN Gender Parity Targets for 2025 and beyond, we must build on this progress. The UN has taken several notable steps toward that end, such as establishing a Senior Women’s Talent Pipeline and launching of a gender parity report last year that helps Member States to assess their progress.

But these efforts will be insufficient unless Member States also take actions to recruit, to retain, and to support women to become police officers, including in senior positions at the national level. As a first step, I want to encourage all of you, if you have not already done so, to conduct an assessment of the barriers to entry for women into policing, and police peacekeeping, in your countries. The United States is working on such an assessment now with one of our partner countries.

Colleagues, the work ahead is not easy. But if we stand together and we commit to this work, I know, and I know you know, that we can strengthen peace and security around the world for everyone.