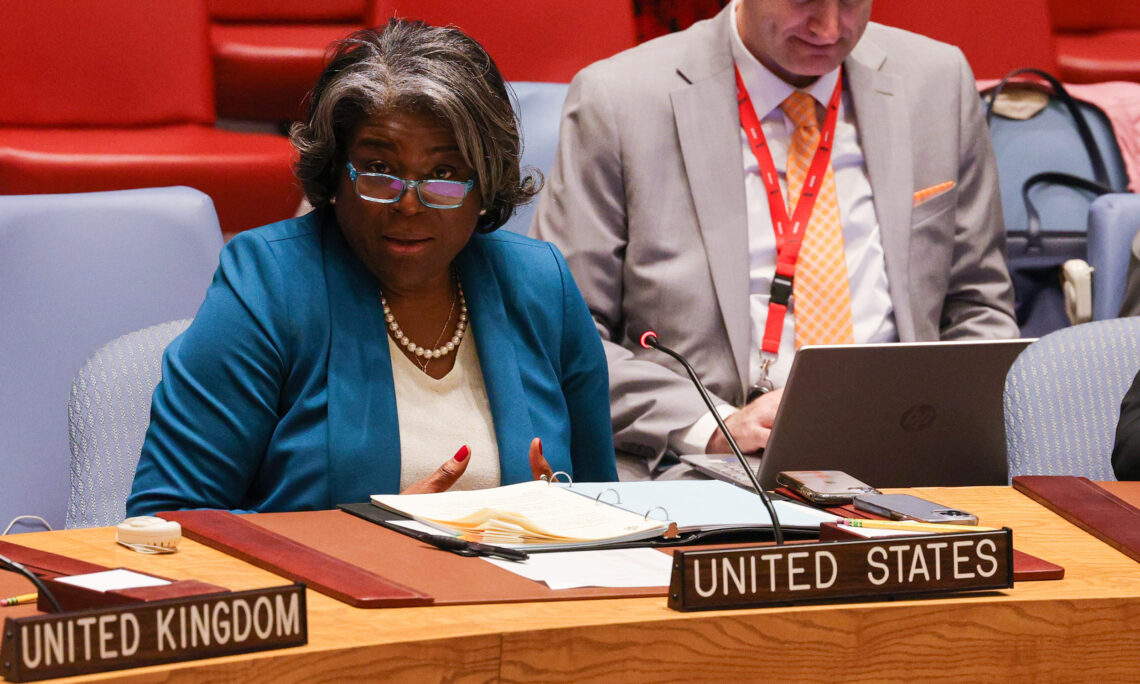 Thank you, Mr. President. Let me start by thanking Gabon for your excellent presidency last month, and while I thought that you had set a record, I understand you didn’t set a record, but it felt like a record, and we really appreciate the spirit of inclusion you brought to the Council. We know that we kept you busy, but you met the challenge. Also, let me welcome the start of Ghana’s presidency. The topic with which we start today is an important one. Thank you, High Commissioner Grandi, for your briefing. I appreciate your focusing on the increasing refugee crises and the needs that you have presented to us today.

In this regard, the United States and Ireland are hopeful members of this Council will support a proposal that we have put on the table, to create a standardized humanitarian carve-out for actors who are under sanction regimes, so that organizations like UNHCR will benefit.

For the United States, our support for the humanitarian work of UNHCR and its partners is unshakeable. The United States continues to proudly be the world’s leading donor to UNHCR. And we call on our fellow Member States to step up and further fund UNHCR in this time of desperate need. And we especially call on those countries who have a record of creating refugee crises to do more. If you caused it, you should pay for it.

Right now, UNHCR truly needs our help. You heard the appeal from the High Commissioner. The number of refugees and forcibly displaced people grew dramatically this year, from 90 million to over 103 million – 103 million. The main reason of course is Russia’s war in Ukraine. Russia has driven more than 14 million people from their homes as we heard from the High Commissioner this morning. It has exacerbated the global food security crisis. You combine that with ongoing conflicts and unprecedented climatic events, it’s no wonder farmers and families are fleeing their lands and homes. Russia is weaponizing winter. Its attacks against Ukraine’s energy infrastructure will be life threatening for the Ukrainian people, especially during the cold winter months.

The United States is working to ensure that our humanitarian partners are adequately resourced to help the government with the winterization efforts. And we commend our European allies and partners for their generosity in hosting approximately seven million displaced Ukrainian citizens and others fleeing Russian aggression.

But I also want to commend Kenya. We have seen the long-term commitment that Kenya has made to hosting refugees in their country. I think the number is close to, if not over, 500,000 right now. I started working on refugee issues in Kenya as a refugee coordinator in 1994, and many of those refugees are still in Kenya today. So again, thank you, Kenya for being a great host to refugees.

A few months ago, I had the privilege of speaking to some of them in Chicago. And I met a woman and her teenage son who had fled Kharkiv. They spoke in harrowing detail of hiding in the basement of their apartment during shelling, the struggle to find food, and fears for their relatives and their neighbors’ survival. But they also told me that since arriving in the United States, they had found hope. They’ve been welcomed warmly in their new community. And they are grateful to all the friends, contacts, and organizations who’ve helped them settle and begin to heal.

Around the world, refugees deserve that same love, attention, care, and support.

In Somalia, an unprecedented drought has displaced nearly one million people this year. Famine is likely unless the international community including the UN system steps up. The United States acted early to address this crisis, providing over $850 million this year in assistance to Somalia as part of our efforts to address the Horn of Africa drought. And we call on other donors to increase their contributions as well. The UN humanitarian agencies family should act now and scale up its response. We do not want to have any regrets on this situation.

The drought and conflict-affected communities in Ethiopia and Kenya also face catastrophic food insecurity, and impossible choices to cope with scarcity. Parents starve so their children may eat. And as of August, almost five million children are acutely malnourished in Ethiopia, Kenya, and Somalia, including more than 1.4 million who are severely malnourished.

The recent resumption of violence in northern Ethiopia has exacerbated one of the world’s worst humanitarian crises. Humanitarians have had to pull back and suspend operations and report a severe shortage of cash, fuel, and essential relief commodities for the more than nine million Ethiopians in need. The supply of Ready to Use Therapeutic Food is completely depleted, leaving the most vulnerable children suffering from the most severe form of malnutrition without this essential lifeline. The United States has provided more than $688 million in support for the northern Ethiopia humanitarian response over the last fiscal year, but needs are extreme and they’re still growing.

For the desperate plight of the Syrian people, we are grateful to Türkiye, Lebanon, Jordan, Iraq, and Egypt, for continuing to provide safe haven to nearly six million refugees from Syria. We are alarmed by credible reports that refugees returning to Syria face torture, arbitrary detention, and forced disappearance. The truth is conditions inside Syria are not safe for large-scale refugee returns. We urge the international community to join us in maintaining support to Syrians and the communities which host them. We also urge this Council to put politics aside, as we heard from the High Commissioner, and do the right thing by extending the UN cross-border aid mandate in January when it expires. Humanitarian needs in Syria are higher today than ever before. The UN and its partners cannot meet those needs without continued cross-border access.

Venezuelan refugees and migrants also need our continued support. Nearly six million Venezuelans have fled to over a dozen countries in the region. Colombia, which currently hosts more than 2.4 million Venezuelan refugees and migrants, has approved more than 1.6 million applications for temporary protected status. And we commend Colombia and others in the region for doing their part. For our part, we have provided nearly $2.7 billion in assistance for the Venezuelan regional crisis in the past five years, and we will continue to take this issue seriously.

While each of these situations around the world is unique, they share common themes: Hunger, conflict, and climate are displacing already vulnerable people. To that end, we welcome UNHCR’s ambitious new initiative to improve accountability to crisis-affected individuals and communities. The initiative rightly emphasizes the need to bring successful, innovative accountability approaches to scale, especially new digital tools for enhancing community feedback. The United States looks forward to the success of this initiative and learning more about how states can support it.