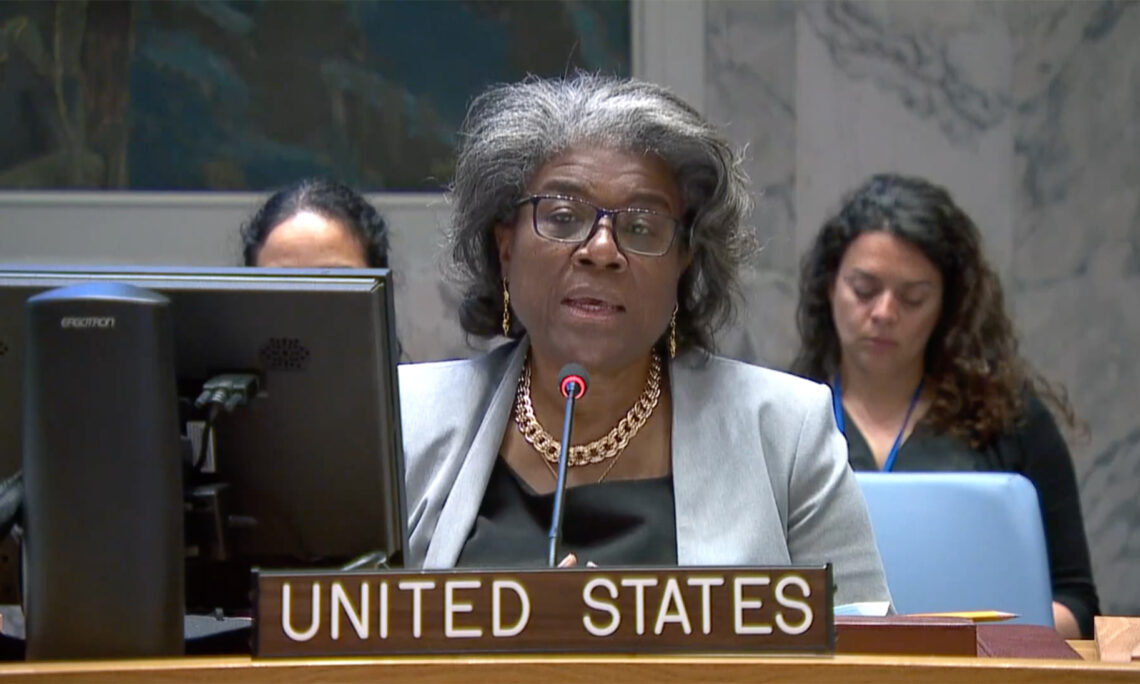 Thank you, Mr. President. And let me start by thanking Under-Secretary Lacroix for sharing his update on UNISFA today. And I also want to thank Special Envoy Tetteh and congratulate her on the assumption of her new position. We look forward to working with her in the course of activities on the Horn.

As we prepare to consider UNISFA’s mandate before May 15, we are grateful to hear how UNISFA has been dealing with all of the changes in the Mission and recent developments in Abyei. I would also like to take this moment as well to welcome the presence of representatives of Sudan and South Sudan here today.

On behalf of the United States, I would like to voice our continued strong support for UNISFA. And I thank UNISFA personnel, for their invaluable service in support of peace, security, and stability in Abyei. While the mission is undergoing its reconfiguration into a new multinational force, UNISFA remains dedicated to carrying out its critical mandate to protect civilians and facilitate the delivery of humanitarian assistance. Still, we know, there is a great deal of work ahead of us. So today, I would like to discuss the need for renewed diplomatic engagement in Abyei – the work UN Peacekeepers must do to address violence and disinformation – and the importance of UNISFA forces having access they need to complete their mission.

First, let’s be crystal clear: the long-term solution to this conflict can only be worked out through diplomacy. And we encourage all parties to renew diplomatic efforts to achieve a peaceful and mutually acceptable resolution of Abyei’s final status. We regret there have been no meetings of any joint institutions or mechanisms, including of the Joint Political and Security Mechanism, since the last time the Council was briefed on the situation in Abyei last year. It’s simply unacceptable to resign ourselves to the status quo. To this end, we urge the appointment of a civilian deputy head of mission for UNISFA, which would enable the mission to better support the parties in their endeavor. And the U.S. welcomes the engagement by the African Union to move us toward a solution.

Second, we are deeply concerned by the recent violent clashes in Abyei in February and March. And we thank the mission for quickly reacting to restore order and increasing patrols. Going forward, we must improve community relations on the ground. This is essential to addressing security in Abyei. UN Police have a central role in engaging local communities in their patrols and through awareness campaigns, including on gender-based violence. This underscores the mission’s need for more police to address criminality and a civilian deputy head of mission to strengthen dialogue with the parties, including on establishing the Joint Police Service. We once again reiterate our call for Sudan to issue visas for UN personnel and a civilian deputy head of mission mandated by the Security Council, in 2019.

UNISFA should also further its support of community dialogue and intercommunal reconciliation through outreach to local peace committees and to those who don’t always understand what the mission actually does. So often we hear that the local populations have unrealistic expectations of UN peacekeepers because they do not fully understand the mission’s mandate. Additional community dialogue and intercommunal reconciliation efforts will improve trust and help prevent violence before it erupts. But this cannot happen if the UN mission is stonewalled in doing its work. UNISFA has still not been able to return to the team sites it had to abandon last year. Local communities have threatened the mission, restricted its freedom of movement, and demanded its withdrawal. And this is simply unacceptable.

This makes it difficult for the mission to support the functioning of the Joint Border Verification and Monitoring Mechanism in this area, as this Council mandated it to do so.Greater political will by the parties to support the mission on this issue will make a difference. And we urge engagement with the local communities to facilitate the smooth functioning of UNISFA, the JBVMM, and the re-deployment of UNISFA to the vacated team sites. We also again call on Sudan to allow the mission access to Anthony airfield. This is a matter of peacekeeper safety and security, and it is absolutely fundamental that UNISFA has the ability to provide medical or casualty evacuations if needed.

Colleagues, the United States looks forward to working constructively with this Council to renew UNISFA’s mandate. We will continue to partner with all of you, the Governments of Sudan, of South Sudan, and the people of the region, and all stakeholders to work toward peace, security, and prosperity of the region.

Thank you very much, Mr. President.