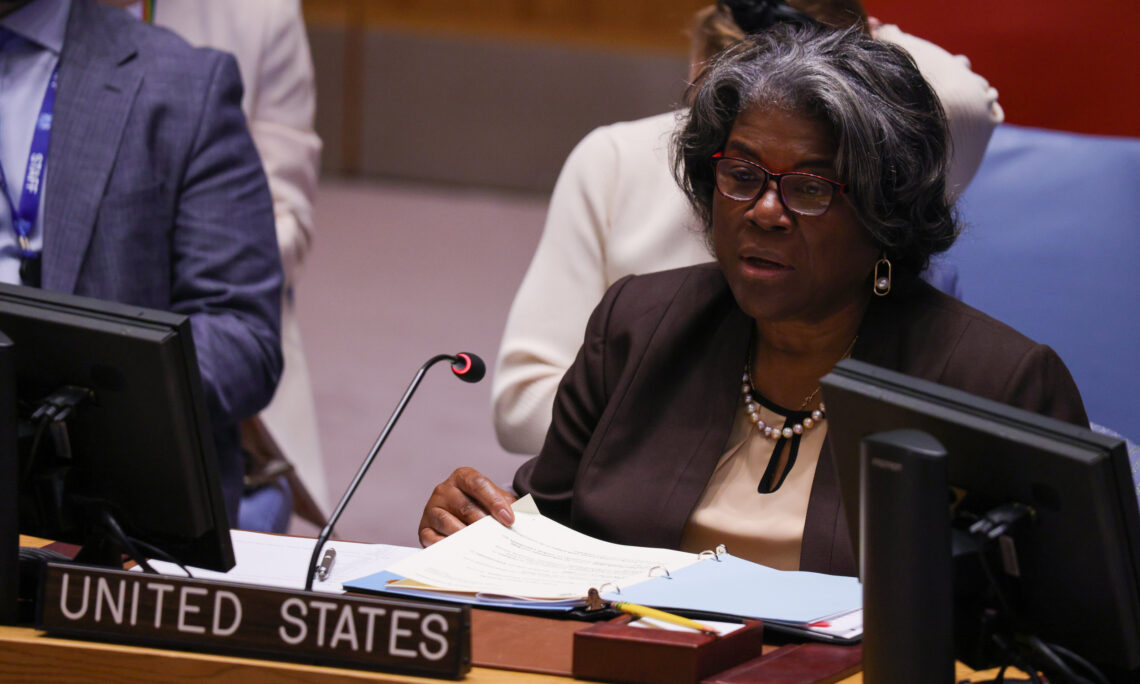 Thank you, Mr. President. Thank you, also Special Coordinator Wennesland, for your briefing. First and foremost, I would like to raise our deep concern over the security situation in the West Bank. This year is on track to be the deadliest year for Palestinians in the West Bank since 2006. We have seen an incredibly worrisome spike in violence in several West Bank cities, and a sharp increase in both Palestinian and Israeli deaths and injuries, including among children.

In the past month alone, at least 23 Palestinians and four Israelis have been killed, and attacks by violent extremists are on the rise. We call on Israeli and Palestinian authorities to do everything in their power to prevent such violence. This means security forces on both sides must refrain from taking uncoordinated actions that degrade the cooperation that had endured difficult times.

As President Biden has made clear, Israelis and Palestinians equally deserve to live safely and securely. Both peoples deserve to enjoy equal measures of freedom, of dignity, and of justice. Just as we have called on the Palestinian Authority to do more to prevent attacks, we also call on Israel to apply equal resources and equal vigor to prevent and investigate all violent attacks against Palestinians. All perpetrators must be held accountable for their outrageous attacks. The world must see that arrests, convictions, and punishments are carried out without bias.

As we head into the height of the committee season, we are once again facing a disproportionate number of resolutions with an unfair focus on Israel. These one-sided resolutions and activities are a distraction and do nothing to improve the situation on the ground.

These outdated texts do not reflect the changing realities on the ground with new possibilities for cooperation ushered in through the Abraham Accords and other normalization agreements. But at the same time, we understand that the Palestinian people need and deserve a political horizon and need something to hope for. Rather than simply rubber-stamping these General Assembly resolutions, we should all be thinking about how to collectively advance the cause of peace.

Despite our deep concerns about the security situation on the ground, we also feel that it is important to highlight real progress. On October 11th, after months of U.S. mediation, the Governments of Israel and Lebanon reached a deal to formally end their maritime boundary dispute and establish a permanent maritime boundary between them. This deal secures the interests of both countries and sets the stage for a more stable and prosperous region.

The United States applauds the work of Israel and Lebanon to reach this historic deal.

This agreement underscores President Biden’s vision for the Middle East: a region that is more secure, integrated, and prosperous achieved through diplomacy and cooperation. The working group of the Negev Forum presents a similar opportunity for countries in the region to set aside differences and work toward shared security and prosperity.

But let me be clear: these regional peace agreements are not a substitute for Israeli-Palestinian peace. But we do believe the momentum of these opportunities can be leveraged to advance progress toward a negotiated two-state solution. Israelis and Palestinians must both remain committed to the idea that all peoples deserve security and justice, dignity, and democracy.

It is incumbent on both parties to work in good faith toward the vision of two states for two people. And in that vein, we believe it is critical for Israel and the Palestinian Authority to refrain from unilateral actions that undercut that vision. Progress will not be easy. Setting aside decades of grievances takes courage and patience – but it is the only way forward. There is no shortcut to peace. Thank you, Mr. President.