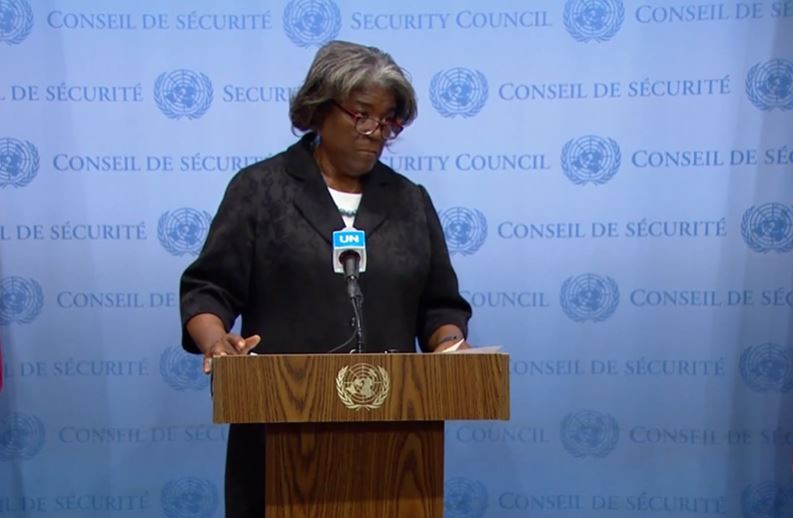 Good afternoon, everyone, and thank you for waiting.

The United States will be tabling a resolution condemning the sham referenda being held in Ukrainian territory. We know the outcomes of these sham referenda were pre-determined in Moscow. The Ukrainian people have already demonstrated they will never accept being subjugated to Russian rule. This Council and the international community must do the same.

So we are putting forward a resolution with Albania that condemns these sham referenda, calls on all states to not recognize any altered status of Ukraine, and obligates Russia to withdraw its troops from Ukraine immediately. We are doing this because, as President Biden said last week, if nations can pursue their imperial ambitions without consequences, then we put at risk everything that this institution stands for. Everything.

Now, we know how one country will feel about this resolution. But we are hoping to see the rest of the Council stand strong in refusing to accept the redrawing of borders through the use of force by any country.

And let me be clear: If Russia uses its veto to shield itself from accountability, we will then look to the UN General Assembly to send an unmistakable message to Moscow. The world must stand together and defend the Charter of the United Nations.

As Secretary Blinken said last week in the Council, if Russia stops fighting, the war ends. If Ukraine stops fighting, Ukraine ends. As we have seen, the Russian people do not want to fight. People are fleeing Russia’s borders, avoiding conscription however they can. Meanwhile, the Ukrainian people are fighting bravely. They refuse to let this war be the end of their beloved country.

MODERATOR: We have time for one or two questions. James?

QUESTION: James Bays, Al Jazeera. First ambassador, before we get to my question, how quickly do you think you’ll be able to bring this to vote? And then my question – in the Council, Ambassador Nebenzya warned on the referenda, that this process could continue. What’s your reaction to the fact that they may be wanting to annex even more territory?

AMBASSADOR THOMAS-GREENFIELD: Well, it’s clear that – in answer to that second questions – it’s very clear that the Russians are capable of doing this again. They did it in 2014, and now they’re doing it again. So I have no doubts in my mind that they will attempt to do it, and that’s why it’s so important that we stand against this immediately, and that we will do. Our plan is to take a vote to the – the resolution to the General Assembly*, if not late this week, early next week.

QUESTION: Thank you so much, Ambassador. And thanks, Nate. It’s Pamela Falk from CBS News. President Zelenskyy to the Council, said he’d like security guarantees and more aid so that this kind of move doesn’t continue. What’s your reaction to that?

AMBASSADOR THOMAS-GREENFIELD:  The security guarantees clearly is an issue that we are also discussing as well, but I don’t have anything specific on that.