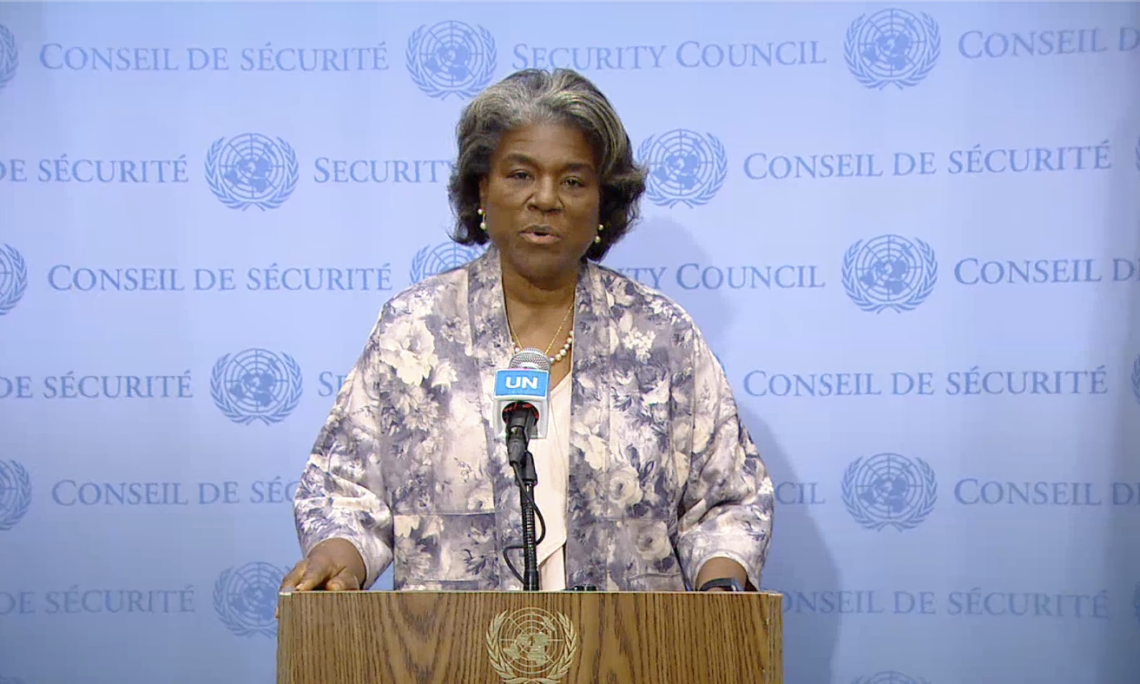 Today, once again, the world stood united – it stood united in the face of President Putin’s unjustified and unprovoked invasion of Ukraine. Together, a strong majority of UN Member States made clear that Russia – Russia – bears sole responsibility for the grave humanitarian crisis and violence in Ukraine. Together, we called for the protection of all civilians fleeing the conflict and for steps to mitigate the increase in food insecurity caused by this senseless war. And together, we reaffirmed the UN Charter.

Russia has tried and failed – in the UN Security Council, and in partnership with others here in the General Assembly – to undermine Ukraine at every turn. But this week, once again, the United States and other nations across the globe have stood together in solidarity with Ukraine to hold Russia accountable.

As President Biden has stated clearly, Vladimir Putin will not see victory in Ukraine. And we heard today, he will not see it here in New York either.

QUESTION: Hi Ambassador, it’s Pamela Falk from CBS News. Thank you for the briefing. My question is about the resolution itself: politically successful, but will it have an impact on the ground? And what do you make of South Africa’s efforts to muddy the waters? Thank you.

QUESTION: But will this have an impact on the ground?

AMBASSADOR THOMAS-GREENFIELD: Absolutely. Absolutely it will have an impact on the ground, because it’s going to give encouragement to the Ukrainian people. But even more importantly, I think it identifies for all of us what we need to do to support Ukraine with humanitarian assistance.

The U.S. is, of course, one of the largest humanitarian contributors to the humanitarian situation in Ukraine. Our humanitarian assistance is at about $600 million now, and we will continue to look for opportunities to provide support to the Ukrainians and encourage others to do so. And this resolution is one way of doing that.

QUESTION: Madam Ambassador, can I ask a question?

AMBASSADOR THOMAS-GREENFIELD: You sure can.

QUESTION: Thank you. Stefano Vaccara, Voce di New York. Madam, as a kind of follow up, because it is a success, 140, yes. But you didn’t increase the support for the resolution. And what do you say to the countries that keep abstaining or not supporting what the majority of the countries at the UN are supporting?

AMBASSADOR THOMAS-GREENFIELD: First of all, there’s really no difference between 141 and 140. But what I say, and what I said to the countries who abstained previously, is that there is no neutral ground here. We’re watching every day what is happening in Ukraine, and we have to stand with the Ukrainian people. And for whatever reasons countries are deciding that they can abstain, they can remain neutral, all they need to do is look at the situation on the ground, look at the devastation, look at Mariupol – the buildings are all being attacked. Look at the large numbers of Ukrainians who have been forced from their homes – more than 3.5 million – 3.5 million have crossed the border – but up to 10 million total, including that 3 million, have been forced out of their homes. There’s no neutral ground.

QUESTION: Ambassador, could I ask a question about the open meeting you requested regarding the North Korea ICBM missile launch?

AMBASSADOR THOMAS-GREENFIELD: All I can say is that we requested the open meeting, and we look forward to having an open discussion of that tomorrow.

QUESTION: Madam Ambassador, what’s next for the U.S. regarding Ukraine?

AMBASSADOR THOMAS-GREENFIELD:  Ending the war. That is what’s next.