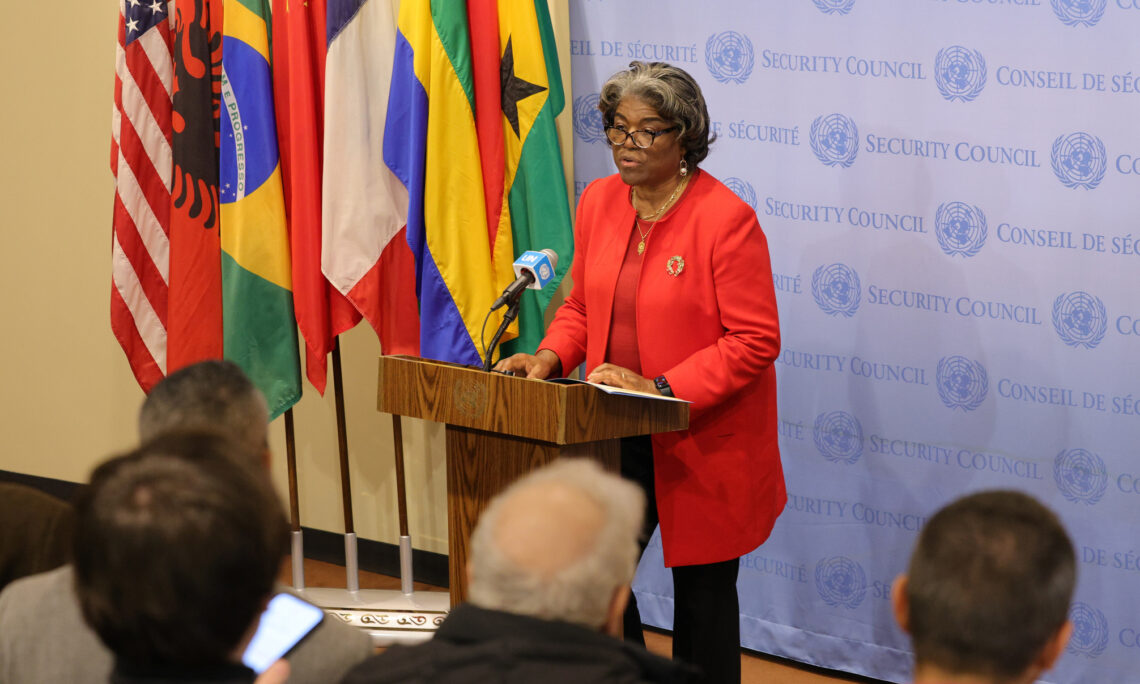 AMBASSADOR LINDA THOMAS-GREENFIELD: Thank you all for being here.

So today we came together at the United Nations and stood with Iranian women, Iranian girls, and the Iranian people.

Following the death of Mahsa Amini, tens of thousands of Iranians said enough is enough. The people have taken to the streets and made their voices heard. They are standing for women, for life, and for freedom.

The Iranian government has responded with brutality and with violence. And you have to ask, why would they want to be on a commission that protects women? The government and its security forces have shot and killed civilians. They’ve tortured and disappeared protestors. They’ve executed people in custody. And yet they want to be on the CSW. Please.

The United States has long stood for gender equality and basic human rights. We had to act. Iranian women have clearly called for us, here at the United Nations, to remove Iran from the Commission on the Status of Women. It was a sensible request. Iran’s membership directly undermines the commission’s work. Its membership was a stain on our credibility.

Today, we removed that stain.

On Saturday, I visited an extraordinary art exhibition on Roosevelt Island called “Eyes on Iran.” I decided to go because I could see the exhibit from my window – big and bold, “Baraye.” And I didn’t know what it meant, and I looked it up and found that it was sort of a protest statement meaning “Because of,” and Iranian women and protestors have used this word in the streets. And when I went on the – to see the exhibition, I could see in the eye that was embedded in the steps were the names of women and people who had been killed. And it really moved me to tears.

During my visit, I learned that they put this striking and moving exhibit across from the UN intentionally. So that us diplomats would see it and we would act. Well, I saw. And today, we chose action.

So, thank you. And with that, I’ll take a few questions.

MODERATOR: We have time for a couple of questions. Let’s start with James. Welcome back.

QUESTION: James Bays from Al Jazeera. You say it was a great day for the commission. You say you came together. Yet this wasn’t an overwhelming result. There were 24 countries that serve on this commission that didn’t support your resolution. They either voted no or abstained. And secondly, what else is the UN – is the U.S. going to do to support the women of Iran? Your Israeli colleague says you should stop any consideration at any point of a nuclear deal.

AMBASSADOR THOMAS-GREENFIELD: Well, look, a yes vote is a yes vote, and the resolution was passed and very few countries voted no. And even many of those countries who decided to abstain gave statements saying they supported this but, for various reasons, they made the decision to abstain, and that abstention didn’t count. It is only the yes votes that made a difference.

And yes, we have to continue to put pressure on Iran because Iran is continuing to attack women in the streets? Women are still in jail. And the rest of this United Nations needs to stand up and call on Iran to cease the actions that they’re taking.

QUESTION: Thank you, Ambassador. A number of countries raised procedural objections to this vote. The Russian Federation called for a legal opinion, which was procedurally defeated. The Pakistani delegate raised questions about the procedural nature – that the rules of procedure for ECOSOC do not allow for the removal of a Member State in this nature. How do you respond to those positions?

AMBASSADOR THOMAS-GREENFIELD: Look, this was historic, and it was something that we’ve never done before. But as I’ve said before, and I’ll say it here, this was the right thing to do and this was the time to do it, and I think we sent a strong message to the Iranian government, and we sent a strong message to Iranian women. And I don’t think any of us have any, any question that this was – this was right. It felt right, and I think it sends the right message.

QUESTION: But is it legally right, Ambassador?

AMBASSADOR THOMAS-GREENFIELD: Clearly it was, because the – a legal opinion was requested, and the legal opinion was that we could do this, and if the Russians wanted to object, they needed to do it 24 hours in advance. And they had 24 hours. We didn’t put this on the table yesterday. They had 24 hours. And what we voted on in the council was not to give them a break. They always look for procedural issues to cause chaos and confuse members. That didn’t succeed today.

MODERATOR: We have time for one more. Yes.

QUESTION: Thank you so much.

QUESTION: My name is Ephrem Kossaify from Arab News. Madam Ambassador, beyond what happened here today, what effect do you think this motion will have on the actual facts on the ground? How do you hope that this would contribute to some sort of a change on the ground? And what’s the next step as well?

AMBASSADOR THOMAS-GREENFIELD: I’m looking forward to seeing your reporting on whether this and how this has impacted the situation on the ground. Our sense is the Iranians were unnerved by this. The fact that they were there, and they protested – they clearly, for reasons that are not clear to me, want to be on this council. And now they know if they want to be on this council, they have to change their behavior.

So, we’re hoping that what happens now is we will start to see some behavior changes. We did see the decision to disband the moral police. I don’t think that’s going to change things significantly on the ground, but it shows that they’re trying to make some – do something to respond, and I’m hoping that in the end they will hear the ECOSOC Council clearly and they will stop their unrelenting brutality against protestors in the streets.

MODERATOR: Thanks, everyone. Thank you.