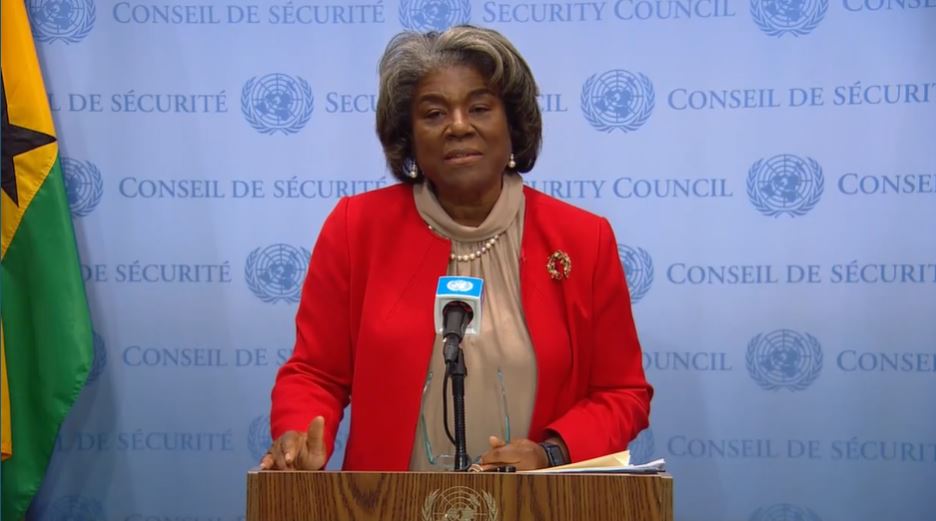 Good morning, everyone. Thank you for being here with us today. I just wanted to stop by before going into the Council. We have a very busy day in the Council today.

For one, in partnership with Ireland, the United States is putting forward an important and groundbreaking, and as my team keeps saying, historic resolution to create a sanctions carveout that will exempt humanitarian efforts. If it passes, and I think it will, this resolution will save countless lives. And I’ll have more to say about that after the vote.

In addition, with thanks to Albania for their partnership, we will be bringing the human rights situation in DPRK to the forefront during an AOB.

Tomorrow, we celebrate Human Rights Day, in honor of the adoption of the Universal Declaration of Human Rights almost 75 years ago. All human beings, and I quote, “All human beings,” that noble document declares in its very first article, “are born free and equal in dignity and rights.” But right now, the people born in the DPRK, in that regime do not enjoy their inherent rights. The silent repression of 25 million people in North Korea is a travesty beyond measure.

On Wednesday, I spoke with Noah Park. Noah escaped the DPRK regime when he was just a teenager. I think he told me he was 14 years old. Noah’s father was an alcoholic and drug addict who beat his family. One day, his father stabbed his mother in the lungs, and she survived. But because of the regime’s patriarchal rules, he faced no accountability.

The people living under the DPRK regime aren’t awarded protection of their basic human rights of life, liberty, and security. So, his mother made the difficult decision – and rare one – to divorce Noah’s father and flee to another town. Because the repression by the DPRK regime is so dire, the family could not find work. Noah could not attend university or even enlist in the military, just because of the stigma of his parents’ divorce. They were in dire poverty and they were starving.

And so, out of desperation, Noah’s sister found a broker who brought her to China. Unfortunately, her only option was to pay traffickers to aid her escape. Through sheer grit, Noah’s sister managed to connect with a missionary group that smuggled her to Seoul. Eventually, she found a way to get Noah and her mother out of North Korea, and they were able to join her in safety. Noah said that even just a few months later, the regime cracked down harder, and made it almost impossible for suffering citizens to escape their iron grip.

Noah is young, but he was wise beyond his years and he showed extraordinary experience. He gave me several messages to share with the Council. He told me about the simple freedoms that North Koreans are not able to enjoy – like the freedom to spend time with friends and family, or the ability to study at a university or even to take a vacation. He also told me that he supported diplomatic dialogue with the DPRK regime – any way to help the everyday people who are suffering under the oppression.

We can’t forget about the economic hardships they face as we make decisions at the UN. The United States agrees – and we repeat our call, as we have done before, to the DPRK to meet us at the negotiating table.

Perhaps most important, though, was the message Noah left me with. He told me that while many around the world view the situation in North Korea as hopeless, he incredibly still has hope. He still believes that one day, the people of North Korea will enjoy the basic human rights we all share.

After talking with him, I have to say he gave me hope as well. And I am going to take that message of hope and courage to the Council today. Perhaps Noah’s words can help my fellow Council Members find the courage to discuss these issues in the open. And in the meantime, the United States will continue to expose the DPRK’s horrific human rights abuses to the world.