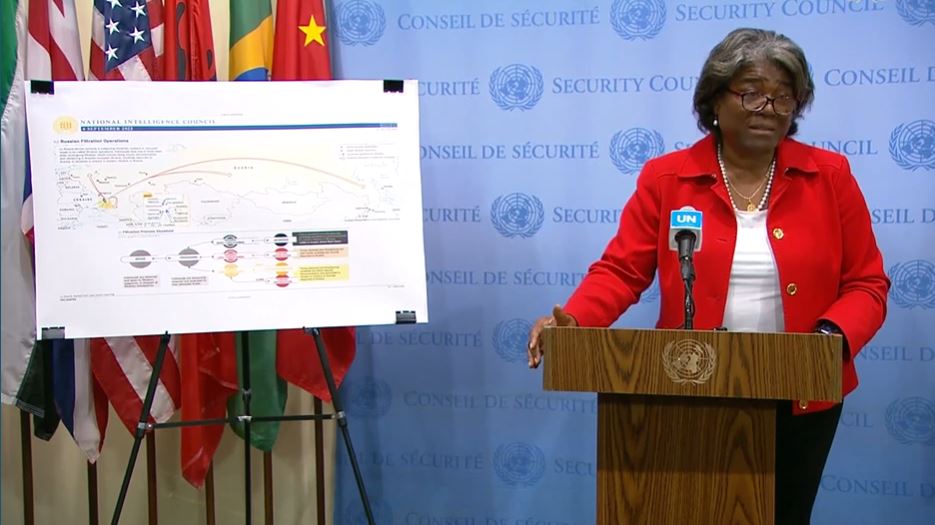 Just want to say that we called today’s UN Security Council meeting along with Albania to discuss Russia’s filtration operations – the process by which Russia “filters out” Ukrainians they deem threatening or resistant to Russian rule. And it’s a real chilling word, the word “filtration.” What it boils down to is a series of horrors happening in real time in Europe that echoes a very dark period of the past.

We have evidence that hundreds of thousands of Ukrainian citizens – including children – have been interrogated, detained, and forcibly deported, and some of them sent to very remote areas as you can see here. This graphic visualizes the process of filtration. The experience is different for everyone, depending on how threatening they are perceived to be toward Russia’s invasion. And some are allowed to remain in Russian-occupied parts of Ukraine. Some are forcefully deported to Russia. And some are sent to prisons. And some simply vanish.

A growing number of eyewitnesses and survivors of “filtration” operations tell stories of threats, harassment, and incidents of torture by Russian security forces. They’ve had their biometric data captured, identification documents confiscated, and all means of communication cut off. They’ve been subject to invasive searches, interrogation under inhumane and demeaning circumstances. It really is horrifying.