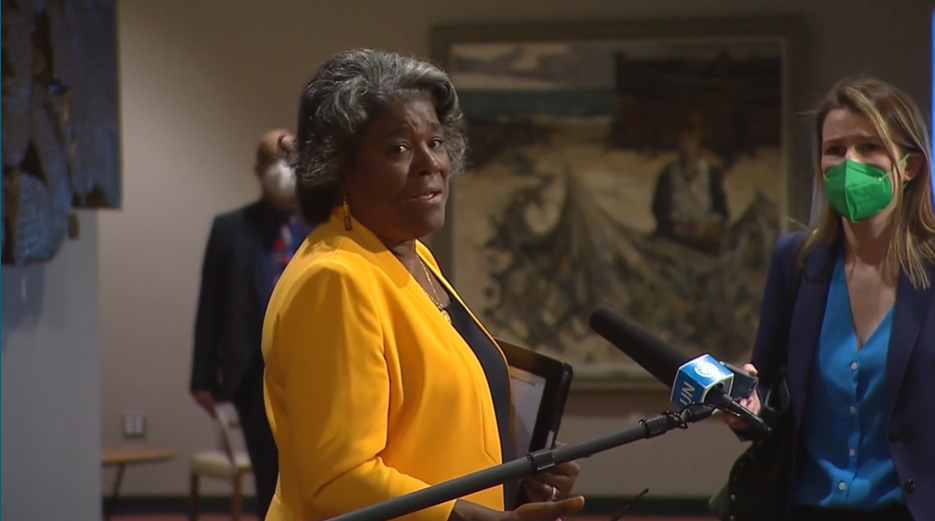 AMBASSADOR LINDA THOMAS-GREENFIELD: Good morning. How are you? I just wanted to stop by for a minute and brief you out on my trip to Brussels. I just returned. But before talking about the trip, I just want to express my sincere condolences over the loss of the Palestinian-American journalists, Al Jazeera journalist, who was killed – Shireen. It was really, really horrifying. She’s well respected. She was doing her job – the jobs that you all do every single day – and I just want to express my condolences to her family, her friends, her colleagues, in fact, all of us, for her loss. The situation of her killing is being investigated and I called for a transparent investigation of her killing. She was very well respected; I actually had the opportunity to meet with her when I was in the West Bank last November and she did an extraordinary interview. And I left there feeling extraordinary respect for her. So, I know that she will be sadly missed by all of us, and we have to ensure that we get to the bottom of her killing.

And then on the trip to Brussels, I had the opportunity to participate in the Syria donors meeting that was called by the European Union – the European Commission. I was happy to announce an additional over $800 million in U.S. government contributions to Syria. My purpose for going, despite the fact that I’m President of the Security Council and everything that we’re dealing with here in the Security Council, was really to amplify and highlight the importance of staying focused on the situation in Syria; to make sure that we start the process of preparing for the extension of the border crossing, the mandate that will expire on the on the 10th of July.

While I was there, I had the opportunity to meet with UN, to meet as well with humanitarian workers who are working in that area. And I also had a meeting with all of the partners, the donors who are there. And I think we all agree that it is important that we continue to provide the needed assistance to the millions of Syrians who are dependent on this cross-border mechanism. So, we will be working very diligently on that over the course of the next few weeks leading up to the extension in July.

QUESTION: Madam Ambassador, what’s your message going to be to Israel? What is the United States’ message to Israel regarding the situation and this shooting?

AMBASSADOR THOMAS-GREENFIELD: Our message, and the Ambassador gave that message very strongly to everyone, is that this has to be investigated. It has to be investigated transparently. And we’re encouraging both sides to participate in that investigation so that we can get down to why this happened. Our highest priority is the protection of American citizens and the protection of journalists; it is so important that journalists be allowed to do their jobs without fear. And so, our message again is let’s get to the bottom of this; let’s ensure this never happens again.

QUESTION: There’s already a feeling that the Palestinians are treated differently than, say, Ukrainian refugees. There’s already this perception in the Middle East that they’re not valued by the West as much as other people. Is this just going to hurt that perception?

AMBASSADOR THOMAS-GREENFIELD: I think that, as you noted, it’s a perception, but it is only a perception. As far as the U.S. government is concerned, our highest priority is humanitarian assistance around the world, and we prioritize it wherever it is – $800 million to Syrian humanitarian is not a small amount of money. We are also the largest donor to support Palestinians around the world.