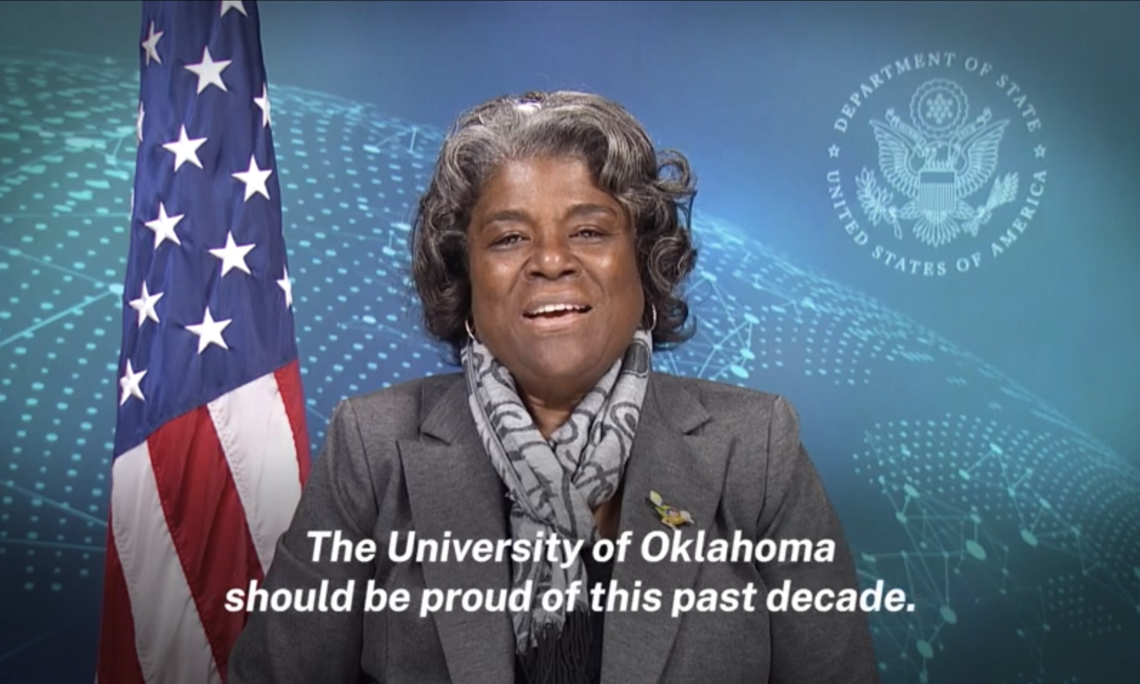 Good evening, everyone, and congratulations on the 10-year anniversary of the David L. Boren College of International Studies. The University of Oklahoma should be proud of this past decade. Your legacy of global engagement, your outsized reach and your commitment to your students, your values, and academic excellence deserves great fanfare and applause.

One person I know who would be particularly proud to see how far you’ve come, and all of your myriad accomplishments, is Ambassador Ed Perkins. I’m sure, just as I do, that you miss him every day. My understanding is that your stated mission is, simply put, to change lives. Well, Ambassador Perkins certainly changed my life.

When I entered the Foreign Service in 1982, Ambassador Perkins was already an icon at the State Department. He would go on to hold some of the country’s most important diplomatic jobs. He was the first ever African American Ambassador to South Africa, during the height of apartheid. And he held so many other high-level posts serving our country, including Ambassador to Liberia, Director General of the Foreign Service, and U.S. Ambassador to the United Nations. It’s no coincidence that I later went on to hold all three of those positions. Seeing him in those roles allowed me to see myself in them, too. But it was not just his passive example that got me there. It was also his active mentorship.

When I was Ambassador Perkin’s staff assistant, I was expected to get into his office before him. I had a 35-mile commute, but I still tried to get there early by at least 6:30 a.m. Ambassador Perkins was, somehow, always there before me, working away. So I decided I had to change that. The next morning, I woke up early and drove all the way to work and clocked in at 5:30 a.m. and to my relief, the office seemed empty. I’d succeeded, or I thought. As I was getting prepared for the day’s work, I decided to go into the Ambassador’s office to ready his papers. And there was Ambassador Perkins. Not only was he already in his office, he was meeting with the driver from the motor pool, offering him career advice. I told him I wasn’t going to try to beat him to the office anymore. But I also learned a lesson that day, and not just about the kind of work ethic it takes to succeed. You see, Ambassador Perkins knew he wouldn’t have time during the day to meet the driver. So he’d gotten up early. He made time to change another life. I decided when I rose to his level, I’d do the same. And to this day, as my staff will tell you, I make time to mentor others – even when it’s inconvenient.

What is so wonderful about this college, and this university, is that is the entire purpose of your work. You make time for your students. You open their minds and hearts. And in turn, they do the same for others. Just as Ambassador Perkins did for me, this institution has set off a chain of mentorship that I know will continue to grow, link by link, for decades to come.

Thank you and congratulations!