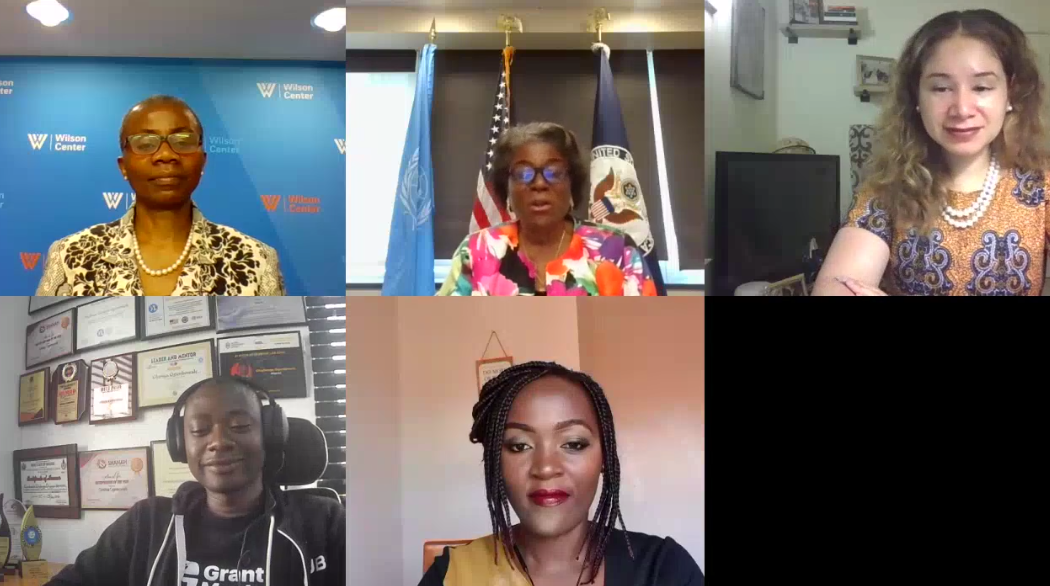 Thank you, Desiree. That was a very kind introduction. And let me tell you how thrilled I am to be here with you today, and to be joined by the outstanding Dr. Muyangwa, and to hear from and speak to so many YALI alumni and participants!

I have two questions as we start. Why am I only being invited the last day? I didn’t realize that this was a three-day event. And second, to Tania: How did you know what I was going to be wearing today? And you post a picture with me with the same suit jacket that I had on five years ago! So, it means I need a new wardrobe! And then, I want to say hello to Washington from Liberia. So, as Desiree was introducing, I was reading all of the notes that were being sent through in the chat room.

I’m just so excited about being here with you. It just amazes me that we’re celebrating ten years – ten whole years – of YALI. Ten years of outstanding partnership, ten years of progress, ten years of leadership. I remember when YALI was born in 2011 – and we were sending off the first group from Liberia, where I was the Ambassador. And I was so proud of my little group from Liberia, and I’ve been supporting the initiative since then. And you might sometimes hear people refer to me as the mother of YALI, sometimes as the grandmother of YALI. Whatever you call me, I’m happy to be associated with YALI.

I spoke at the first YALI summit in DC and have participated in various programs over the years. And like a good mother and a good grandmother, whenever I talk about all of you it just fills me with so much pride to be associated with you. There’s nothing that makes me prouder than when I hear of the great things that you’re doing. I’m like a proud mother when you make your various accomplishments. And I know every time I see some of the things you’ve accomplished, I’m reminded that you are the future.

As many of you know, most experts agree that if the current trajectory holds, Africa’s population will double by 2050 – to 2.5 billion people, potentially a quarter of the world’s population. Twenty fifty – guys and gals – is just 29 years from now, when most of you will be close to my age, and the success of the world’s next generation will be on your shoulders, so I happily pass over that leadership mantle to you, and I’m confident that you’re ready to take it on.

So not only do you represent Africa’s future, you represent the future of the world. That’s so important at a moment when so many global challenges – like COVID-19 and climate change – demonstrate at once how interconnected we are and how important our partnerships are. Last week, in fact, I discussed some of the challenges facing the African continent shared by so many of us after this past year – and this was in the Security Council. And I made it clear that the United States is committed to being a partner to Africa as you confront the economic fallout of COVID-19, as you confront the challenges of climate change, and other threats that you face every single day. And that we believe that the best and the strongest partnerships are built on a foundation of trust, transparency, accountability, and areas of mutual opportunity.

Programs that build people-to-people relationships – like YALI – are the heart to our approach to Africa. Because the truth is, while Africa is a continent rich in resources, you and the next generation are Africa’s greatest resource of all. I’ve lived and traveled all across Africa, and wherever I go I see young people like yourselves – including Mandela Fellows and members of the YALI Network – who are engaged, who are active, who are ambitious, who see the potential and the promise of the continent and their countries.

Before the pandemic, Africa’s economies were the fastest growing in the world. And that’s largely thanks to young people, like you, who are ready and willing to contribute to their country’s future and success, and excited to innovative and bring a fresh approach to old problems. So, you represent not just a new generation, but new ways of thinking, new approaches. And when the current generation of leaders leave power, it will be up to you, and to the rest of the young people of the continent, to stand up and to take leadership skills to the next level and to bring a new approach to the table.

Which brings me to today’s topic: servant leadership. Because we have to flip this idea that people are meant to serve the leader. Leaders should serve the people and organizations they lead – not the other way around.

I just came back just yesterday from Ecuador, and the Ecuadorians elected a wonderful president. He was kind of not expected to win the election, but he won because he was putting out a message of democracy, a message about people, a message that talked about anti-corruption, ethics, and politics. I told him when I met with him that what he was saying was music to all of our ears.

And finally, it means placing more importance on the institution than the individual. It’s time to replace strongmen with strong institutions. Institutions that will protect the powerless, stand up for human rights, and serve the people.

The challenges Africa faces are great. But Africa’s promise – thanks to young people like you – is far greater. For our part, the United States is committed to doing what we can to help propel that promise forward. But you’re going to be in the driver’s seat. I’m going to sit in the passenger seat and just watch you take over. And I look forward to seeing what you accomplish.

Thank you very much, and let’s get this discussion moving forward.

By United States Mission to the United Nations | 26 May, 2021 | Topics: Highlights, Remarks and Highlights