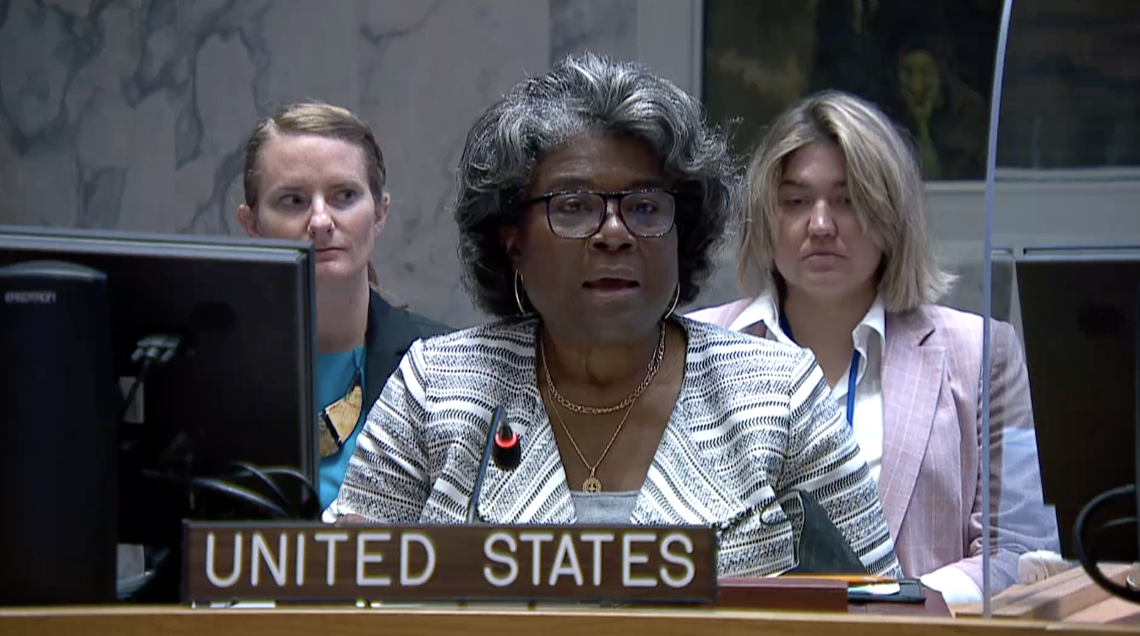 Thank you, Mr. President. Since I was not here at the beginning of your presidency, let me enthusiastically welcome you to the assumption of the presidency role and wish you the best during this month.

I also wish to thank you, Albania, for calling this very important meeting. And I also would like to give a special thanks to our briefers, SRSG Patten, Ms. Karbowska, and Ms. Rollins Westin for your illuminating remarks. I welcome the participation of the Ukrainian PR in our midst today, as well as Mr. Michel, the President of the European Council.

Since Russia launched its illegal and unprovoked further invasion of Ukraine, a mountain of credible reports of atrocities committed by Russia’s forces against civilians has grown every day. These reports include horrific accounts of sexual violence. More and more allegations show Russia’s soldiers sexually assaulting women and girls, as well as men and boys. We have heard from Ukraine’s Foreign Minister of multiple cases of sexual violence by Russian soldiers in Ukrainian cities that were under the control of Russia’s forces. We have heard from Ukraine’s Deputy Prime Minister that Russian soldiers raped Ukrainian women for hours — and then killed them.

The corroborating evidence goes beyond Ukrainian officials. In Bucha, we have evidence of atrocities, including imagery that confirms the presence of mass graves. And you’ve heard, just today, from the SRSG. There, in Bucha, there are indications of Russia’s brutality include credible reports of violence perpetrated up close and in cold blood: individuals killed execution-style, bodies showing signs of torture, and sexual violence against women and girls. There have been multiple reports from survivors of Russia’s soldiers breaking down doors to basements where women were sheltering and raping them. These terrible acts were done in front of their children, and they were filmed by the Russian soldiers. These are bone-chilling accounts. And we know for every account we hear, many more are unknown.

So, Council Members, we cannot stay silent. We must seek and achieve justice for victims. And we must do everything we can to prevent further violence.

Responsibility starts, first and foremost, with Russia. As a reminder to the Russian Federation, Security Council Resolution 1820 recognized that rape and other forms of sexual violence can constitute war crimes and crimes against humanity. Furthermore, under international humanitarian law, sexual violence is prohibited. It is on Russia to take measures within its forces, and its proxy forces, to ensure adherence to this resolution and to international humanitarian law. It is on Russia to stop rape, violence, and atrocities from within its ranks. It is on Russia to end this unconscionable, unprovoked war on the people of Ukraine, and we call on the Russian Federation to do just that.

And though the primary responsibility rests with Russia, I also want to talk about what the rest of us can do to address this heartbreaking situation. The Framework of Cooperation, established by Special Representative Patten and her team, and signed with the Government of Ukraine last month, deserves our strong support. It should serve as a vehicle for UN alignment and coordination. We should share the key elements of this framework, and we should do everything we can to support the Ukrainian authorities as they follow the framework. The United States will continue to support Special Representative Patten’s office to facilitate this important work.

The Commission of Inquiry, created by the Human Rights Council, can also ensure Russia does not get away with hiding atrocities. Last month, the HRC passed another resolution that called for the Commission of Inquiry to address the events in the areas of the Kyiv, Chernihiv, Kharkiv, and Sumy regions, with a view to holding those responsible to account. Both the Commission of Inquiry and the UN Human Rights Monitoring Mission in Ukraine are critical to ensuring accountability. Sharing information and documenting crimes is critical to ensuring accountability for crimes of rape and other forms of gender-based violence. This can only be done through effective investigations of reports of such crimes and trials in appropriate criminal courts.

And all of this requires resources. Many on this Council have emphasized their political commitment to preventing gender-based violence. Now is the time to provide proof of that commitment, to match words with action. Ukraine is counting on us.

Finally, as we work to achieve accountability, we must also do right by the survivors of sexual violence. They urgently need improved and expanded comprehensive service provisions — including sexual and reproductive health services, medical and specialized mental health services, legal assistance, and livelihood support.

All of this work needs to be survivor-centered and trauma-informed. Above all, it must give survivors hope. Together, let us take on the scourge of conflict-related sexual violence. Let us demand accountability and justice for survivors, and provide the resources to see it through. And let us do everything, everything in our power to prevent more violence and end Russia’s unconscionable war. Thank you, Mr. President.