Home Home | Search Results | Remarks by Ambassador Linda Thomas-Greenfield Before the Vote on a U.S.-Drafted UN Security Council Resolution on the DPRK 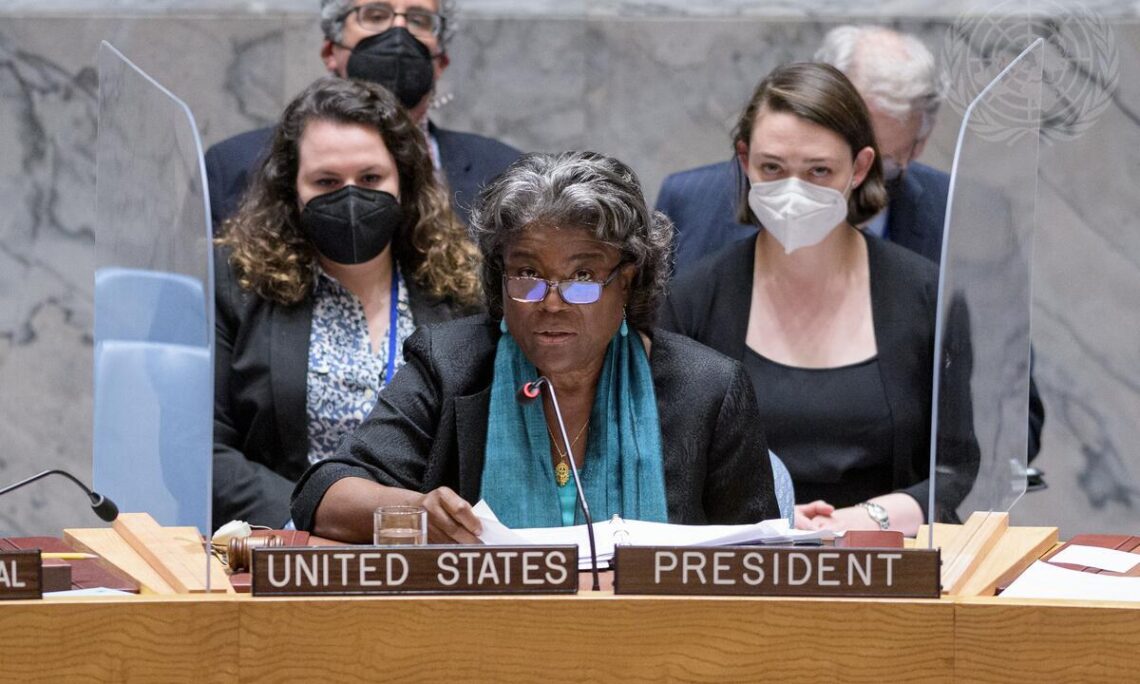 Colleagues, today’s vote could not be more clear. Here are the facts. The DPRK’s May 25 launch of three ballistic missiles included yet another ICBM launch. The United States assesses this is DPRK’s sixth ICBM launch since the beginning of 2022. This is a threat to the peace and security of the entire international community.

It is undeniable that the DPRK continues to illustrate its commitment to advancing its WMD and ballistic missile programs in violation of multiple Security Council resolutions. And this Council made a commitment to respond to exactly this kind of escalation. We cannot allow the DPRK to normalize these unlawful and destabilizing actions, nor let the DPRK divide the Security Council, and exhaust our capacity to respond decisively.

The DPRK has now conducted six ICBM tests without any response from the Security Council, despite the commitment the Council made in Resolution 2397 to take further measures in the event of an additional ICBM launch. Following this commitment by the Council, the DPRK suspended ICBM tests for five years. But its ICBM launches in recent months have tested the will and the integrity of this Council to carry out its commitments. Thus far, we have not.

We cannot let this become the new norm. We cannot tolerate such dangerous and threatening behavior.

Some Council members have argued that a PRST is the appropriate response to the DPRK’s ICBM launches. May I remind my fellow Council members that we have tried to propose press elements and a press statement following many of the DPRK launches this year, including the March 24 ICBM launch. We were told, however, that any such statement could lead to escalation or destabilize the Korean Peninsula.

In fact, the exact opposite has happened. The DPRK has taken the Council’s silence as a green light to act with impunity and escalate tensions on the Peninsula. It has engaged in an unprovoked series of 23 – and let me repeat that – 23 ballistic missile launches since the beginning of the year and is actively preparing to conduct a nuclear test.

Council action is not the reason for the DPRK’s escalation. Because Council inaction is certainly enabling it. And today’s vote is the Council’s opportunity to stand by its word. It’s the Council’s responsibility to act in response to the DPRK’s ICBM launches. And only through a resolution can we deliver on the Council’s commitment in Resolution 2397.

With the adoption of this resolution, we can send a message to all proliferators that we will not stand for their actions that seek to undermine international peace and security. We took a deliberate and Council-wide approach to negotiations to ensure all members have a voice in this resolution. That certain Council members refused to engage, despite our commitment to and demonstration of inclusivity throughout this process, is their choice, and it’s their choice alone.

If adopted, this action-oriented resolution will restrict the DPRK’s ability to advance its unlawful WMD and ballistic missile programs, streamline sanctions implementation, and further facilitate the delivery of humanitarian aid. It also takes an urgently needed step to address the concerning COVID-19 outbreak in the DPRK.

We ask all Council members to stand with us against the DPRK’s unlawful actions and vote for this resolution’s adoption. This should continue to be an area of Council unity. And now is the time to act.