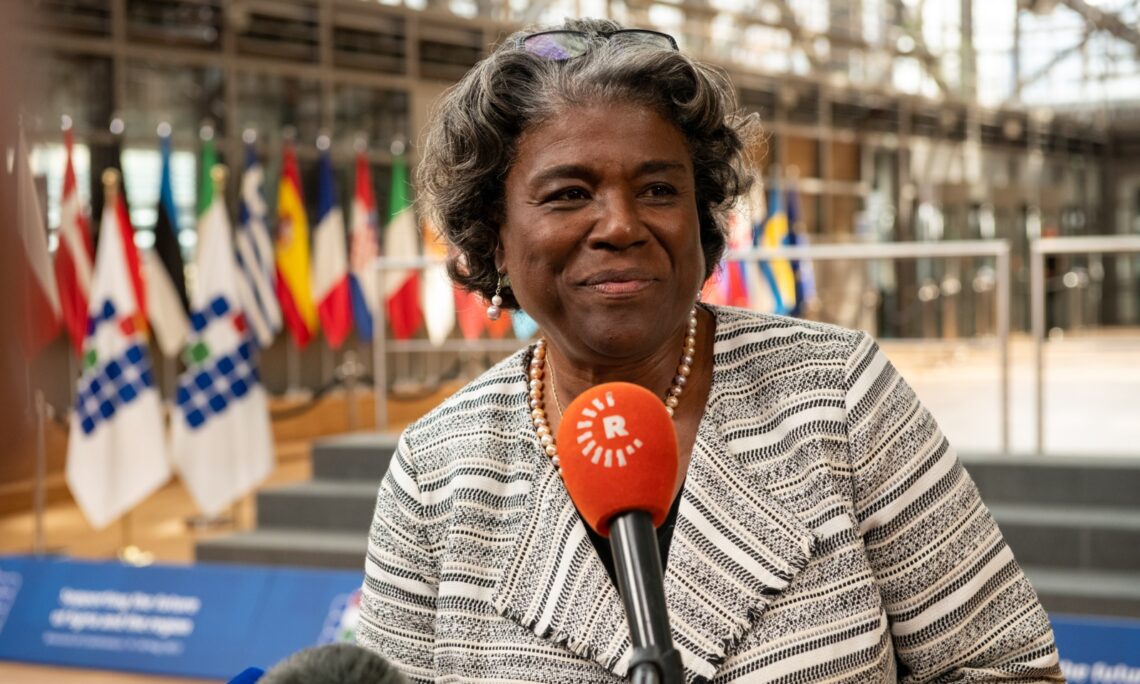 AMBASSADOR THOMAS-GREENFIELD: (In progress) the largest contribution ever – over $800 million to the Syrian people.

And I just want to say that given the focus that all of you have and we have on Ukraine, I thought it was important for me to come here from New York to say that we have not forgotten the Syrian people.

QUESTION: What about the politics of the situation? Is the – your position, of U.S., regarding the political situation in Syria?

AMBASSADOR THOMAS-GREENFIELD: Look, we – as I mentioned in my remarks today, the political situation is key to solving this for the Syrian people. We are encouraging that there be a political solution, but we’ve also been clear that we will not provide any reconstruction to Syria until the political situation has been resolved and accountability for what is happening on the ground in Syria has been taken care of.

QUESTION: I know you’re here talking about humanitarian support for Syria, which is obviously urgently necessary, but back at home in Washington, the debate is focused on the support for Ukraine right now, and President Biden yesterday asked Congress to urgently act on that supplemental funding or it’s going to run out in 10 days. Can you just describe what is at stake here? If Congress doesn’t act quickly enough, before May 19, what is at stake?

AMBASSADOR THOMAS-GREENFIELD: Well, let me just say that we really have had bipartisan support for our engagement on Syria*. Both sides have been supportive of the President’s initiative, and I think that they all understand that if we’re not there to continue that support, what it would mean for the Ukrainian effort to defend themselves against the Russians. So, this is about Ukrainians on the ground being able to defend their democracy, defend their sovereignty, and defend their people, so it’s critical that we continue to provide that support. But it’s not just the United States; we encourage others to also be – to stand side by side with the Syrians**, and we have been very, I think, successful in New York and globally in unifying the world, and particularly unifying NATO and unifying Europeans, in support of the Ukrainian cause.

AMBASSADOR THOMAS-GREENFIELD: Assad is in place, but we have been very, very clear that to have a political solution there has to be accountability, and Assad has to take some responsibility – in fact, all responsibility for what is happening on the ground in Syria.

AMBASSADOR THOMAS-GREENFIELD: Well, Russia is there as well, and so that is another issue for us to engage on.

QUESTION: But, like, if Russia and U.S. are now more in the Ukrainian case, can regional powers in the region play more role in a political solution as we see in Jordan or in United Arab Emirates or Israel?

AMBASSADOR THOMAS-GREENFIELD: Yeah. In all of these situations, Ukraine included, the regional neighbors are important. And so, in Syria, how the neighbors engage on this is key to how quickly we’re able to achieve some progress there.

QUESTION: Do you see the (inaudible) engaged more? There was more signs, like the visit of the King Abdullah and the visit of the Foreign Minister of the United Arab Emirates to Damascus. So, we see, like, now there are signs that they are playing more a role in the war of Ukraine.

AMBASSADOR THOMAS-GREENFIELD: We’ve seen that as well. We don’t think that the time is right at this moment to normalize relations with Assad. There are still critical issues that need to be addressed before normalization takes place. But again, we’re very supportive of efforts to find a political solution moving forward. Thank you.

By United States Mission to the United Nations | 10 May, 2022 | Topics: Highlights, Remarks and Highlights