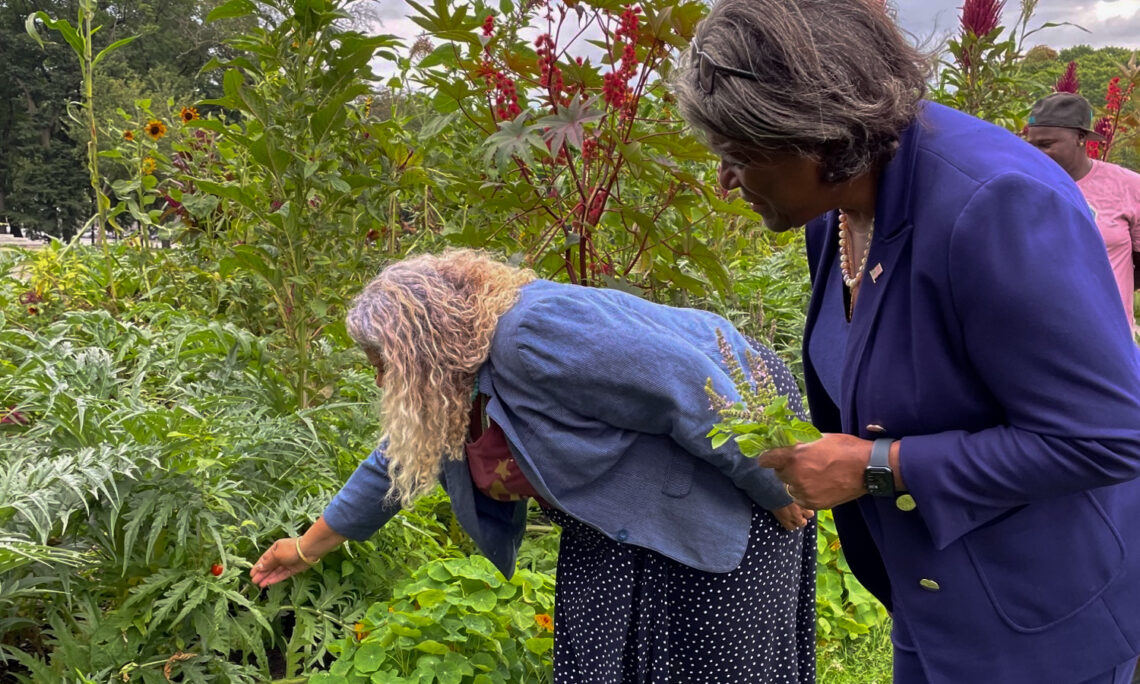 AMBASSADOR LINDA THOMAS-GREENFIELD:  — the United States, we’re focusing on food insecurity. And I have the opportunity to see what is being done here to address the food insecurity issues that we face in urban areas of the United States. And for me, it’s particularly poignant, because it highlights the fact that many of our global issues are local issues. And so we cannot turn our backs on global issues because they impact what happens to us locally. Be happy to take some of your questions.

QUESTION:  Since we all have that shared issue, what attracts you to Chicago [inaudible]?

AMBASSADOR THOMAS-GREENFIELD:  You know, we were, I have gone to a number of locations, but the Chicago Council is here. And I was looking for an opportunity to take the issue of food insecurity out of New York. And so this was presented to me as an opportunity. I have been here before; I’ve spoken to the council many, many, many years ago. And so I thought this was a great opportunity and a great forum for me to discuss those issues.

QUESTION:  What are you holding?

AMBASSADOR THOMAS-GREENFIELD:  This is holy basil and it’s so aromatic. I’m going to look for some to put in my house. I have a couple of peppers. I love cooking and I am from Louisiana, so I really like spicy hot food. So I’m looking forward to tasting these peppers. I didn’t want to do it in front of you because I’m not sure how hot they are. But the hotter the better. And this is [inaudible]. I’ve never seen this before so I’m looking forward to testing that.

As part of my role at the UN, I do something called gumbo diplomacy. And I’ve done that my entire career; I spent 35 years in the Foreign Service. I cook and I think I’m pretty good at it. And I look for opportunities to use my cooking skills around the world. So I’m going to be looking for this [inaudible] to see how I can use this in some of my food diplomacy that I participate in.

AMBASSADOR THOMAS-GREENFIELD:  I mean, I think the most important learning experience is that people can take their food security needs into their own hands. So I was in Ghana a few weeks ago, and I gave a speech in which I stressed that Africans can become the breadbasket of the world. They don’t have to be dependent. Urban areas, people don’t have to be dependent on food coming from elsewhere. Look at what has been done with this small area. And I’m told there are farms like this all around Chicago. So again, people can take this as a learning experience, and teach their their kids. I mean, many of our children don’t know where food comes from. They don’t know what these vegetables are that make their their food taste good. So I think it’s a great learning experience, but it’s also an opportunity for people to deal with their food insecurity issues for themselves.

MODERATOR:  I think the sky has held out for us for a little while, but now it’s starting to rain. So unless anyone has one last quick one.

QUESTION:  So we think of Chicago and Africa as inhospitable to growing plants that we can live on. But is it possible?

AMBASSADOR THOMAS-GREENFIELD:  Oh, absolutely. I spent more than 35 years of my Foreign Service career living and working in and around Africa. And the opportunities on that continent are immense. It is a welcoming continent. Africa can be the breadbasket for the world. It certainly can be the breadbasket for Africa. And the people are so warm, and I’m seeing that here in Chicago. As I’ve only been here a few hours, but in the few hours that I’ve been here, I’ve been extraordinarily impressed and welcomed by the hospitality that I’ve experienced.

MODERATOR:  One last one.

QUESTION:  Can you talk a little bit about how climate change is impacting insecurity and why it’s an important issue [inaudible].

AMBASSADOR THOMAS-GREENFIELD:  So, you know, again, using Africa, using the continent of Africa as an example; I have to be careful not to keep referring to Africa like it’s country. But using the continent, as an example, we’re seeing an extraordinary impact from climate change. We’re seeing herders who have to move further south to water and feed their animals, and they’re encroaching on farms. And that’s causing conflict. And it’s the basis of the conflict is climate change. We’re seeing people migrate because of climate change. I met yesterday with the Ambassador from Chad. And Lake Chad was like Lake Michigan. Lake Chad is now a pond because of the impact of climate change. So government policies need to be focused on addressing how to counter the impact of climate change. And this is something that the Biden Administration is very, very focused on in terms of what we provide farmers, for example, most recently, and I only just learned this since I was preparing for the trip that through the IRA*, we’re providing funding for farmers in the U.S. to provide technical support for farmers elsewhere in the world. And that’s also, you know, how do you address the impact of climate? How do you figure out how to use less water on your plants because you’re not getting the rains that you would normally get? I’m told that people are planting their crops later and later because the rains are coming later.

MODERATOR:  Thank you, everyone.