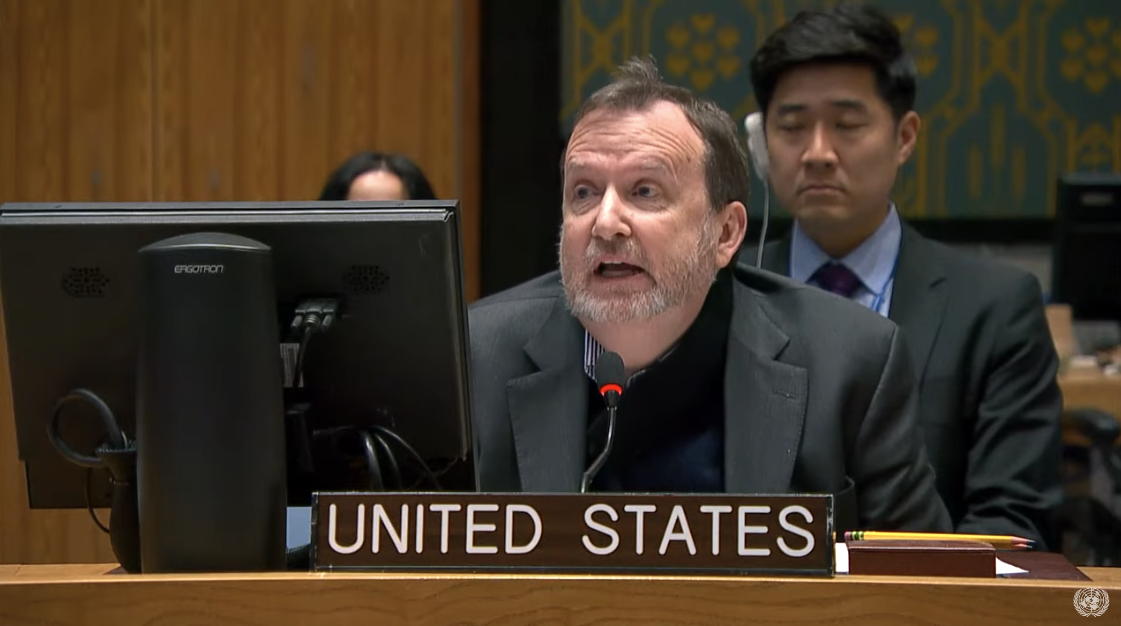 Thank you, Mr. President. Assistant Secretary-General Karis and Metropolitan Anthony, thank you for your briefings today.

Let me start by being clear: The United States takes seriously allegations of violations of human rights, including the freedom of religion or belief. We expect all countries to respect human rights and fundamental freedoms, and we call out those, friend or foe, who fail to meet them – including ourselves when that happens.

But really, can any informed person take seriously Russia’s purported commitment to religious freedom in Ukraine?

Let me echo the comments of our French and Albanian counterparts: The subject of this meeting is another cynical attempt by the Russian Federation to invent justifications – justifications for a senseless, unholy war.

Over the past several months, Russia has thrown a variety of flimsy excuses at the wall in an attempt to justify the unjustifiable. We have heard that Russia seeks to “de-Nazify” and “de-militarize” Ukraine. We have heard that they seek to protect Russian speakers. That they are fighting drug traffickers and addicts. That they are fighting Satanists.

Russia has also sought to justify its war through cynical attempts to distort the history of the Holocaust. This disinformation detracts from serious, critically important worldwide efforts to combat anti-Semitism, including Holocaust distortion.

This Council has heard no shortage of excuses from the Russian delegation on why its brutal invasion is supposedly righteous, and why its attacks that have killed and injured civilians are a necessary price. As we meet, we are seeing the price Moscow is inflicting on innocent civilians in Ukraine. Emergency personnel are still digging through the debris of an apartment building in Dnipro that Russia attacked, killing dozens, including children.

And so, today, another phony justification to justify the war in Ukraine, Russia’s concern about religious freedom in Ukraine. Let us consider, as others have noted, Russia’s appalling damage to religious sites and places of worship in Ukraine, despite its concern about religious freedom. UNESCO has verified damage of 104 religious sites since Russia’s brutal invasion of Ukraine last year. In areas of Ukraine under Russia’s control or occupation, there is pervasive and continuous evidence of abuses by Russia against peaceful members of religious groups that Russia considers undesirable or has summarily deemed “extremist.”

We are concerned about the safety of members of all religious communities in Ukraine, particularly the safety of those living in areas under Russia’s control or occupation, including members of the independent Orthodox Church of Ukraine, Crimean Tatar Muslims, Jehovah’s Witnesses, Evangelicals, and Baptists. Last week, Russia sentenced five Crimean Tatars to 13 years, and one Crimean Tatar religious leader to a heartbreaking 17 years in prison for participating in a religious group outlawed by Russia.

Since 2014, Russian authorities have prosecuted dozens of Crimean Tatars on charges that independent observers characterize as baseless. We urge the Kremlin to respect the human rights of all and the safety of the civilian population of Ukraine, including of members of all religious communities.

We must also note Russia’s flagrant violations and abuses of human rights and fundamental freedoms, including freedom of religion or belief, in Russia and in Russia controlled areas of Ukraine. There are numerous reports – we’ve all seen them – of Russia’s authorities detaining, physically abusing, torturing, and imprisoning individuals on the basis of their religious beliefs or affiliations, and then wrongfully labeling them as “extremists,” “terrorists,” or “undesirable.”

In conclusion, Mr. President, the Kremlin’s objective has not deviated since Putin began his war against Ukraine: the violent conquest and subjugation of a sovereign country. Russia now hopes to force Ukraine into a frozen conflict, lock in its gains, rest and refit its forces, and then attack again until Putin’s revanchist goals are met.

We all witnessed Russia’s playbook. Wreak death and destruction in Ukraine. Freeze and starve its people. Force them from their homes. Drive them across Europe and around the world. Then drive up energy, food, and other household costs. And then, distract the international community with disinformation, such as today’s wasteful briefing.

We urge those here and those watching to reject Russia’s attempts to create false equivalencies, and we once again call on Russia, as others have done, to end its brutal, unprovoked war against Ukraine and cease its violations of international law, including the UN Charter.