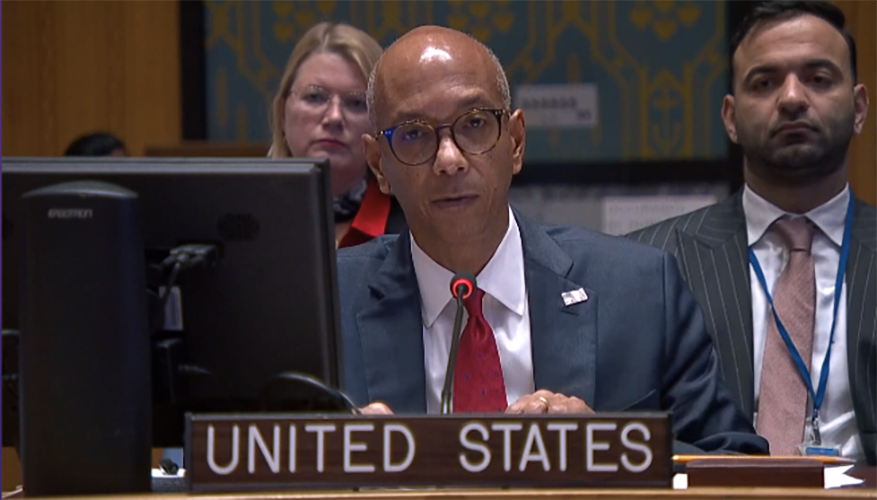 Thank you, Madam President. Thank you, Special Representative Bathily, for your update on the current situation in Libya. We have been impressed with your perseverance so far in convening Libya’s leaders. We will continue to support your efforts.

In the seven years since the signing of the Libya Political Agreement, the Libyan people have witnessed conflict, government mismanagement, rampant corruption, and human rights abuses, instead of democracy and prosperity that they deserve.

Libya’s political transition remains stuck in the year since the failure of Libya’s leaders to hold presidential elections. We support the Special Representative’s effort to help Libyan leaders work to solve Libyan problems in Libya and to encourage them to engage the Libyan people to explain why they deserve their votes in free and fair elections.

In that year, we have seen continued manipulation of Libya’s oil resources and the diversion of revenues to fund militias in both east and west, instead of being used to benefit the Libyan people through building infrastructure, promoting a diversified economy, or improving services like healthcare and education.

Where does this leave Libya? Powerful Libyans have undermined the roadmap to elections, seeking only to protect their spheres of influence, presiding over turf battles among militias, criminal enterprises, and foreign fighters, the horrific treatment of migrants, and the declining living standards of the Libyan people.

The Libyan people have long made it clear they want better for themselves and their country. They have demanded elections.

We reiterate that it is imperative for Libyan stakeholders to engage in good faith in discussions, facilitated by SRSG Bathily and UNSMIL, toward the establishment of a constitutional framework for presidential and parliamentary elections and a timeline for a vote.

We have seen that meaningful progress is possible – the meetings in September between representatives of the House of Representatives and the High State Council yielded considerable agreement on a draft framework for elections. We know the remaining items are not about substantive constitutional issues but are instead about shaping the framework to accommodate the circumstances of specific individuals. It is time to set aside the ambition that has frozen Libya for years and finalize the framework.

The finalization of a revenue management and transparency mechanism should help blunt personal ambition by reducing opportunities for personal enrichment and access to funds to maintain personal security arrangements. It is hard to imagine a credible and reasonable objection to joint decision making and transparent record keeping around the allocation of Libya’s vast oil wealth. We appreciate SRSG Bathily’s efforts to prioritize the establishment of a transparency mechanism.

The work of the 5+5 Joint Military Commission has largely been positive. It is imperative this group continues its collaboration on the implementation of the ceasefire agreement. We welcome the deliberate consideration of initiatives and pilot projects to unite the armed forces and look forward to detailed information about such ideas.

Once again, we thank you, Special Representative Bathily, for your efforts to generate an agreement on the holding of free and fair presidential and parliamentary elections. The United States supports that work and urges Libyan leaders to engage constructively in order to deliver elections that are desperately needed to restore the credibility of the Libyan government and the faith of the Libyan people.

Special Representative Bathily, you have a challenging mission before you. But know that you will continue to have the steadfast support of the United States as you help to move the Libyan people towards elections, better governance, and ultimately, security and prosperity.