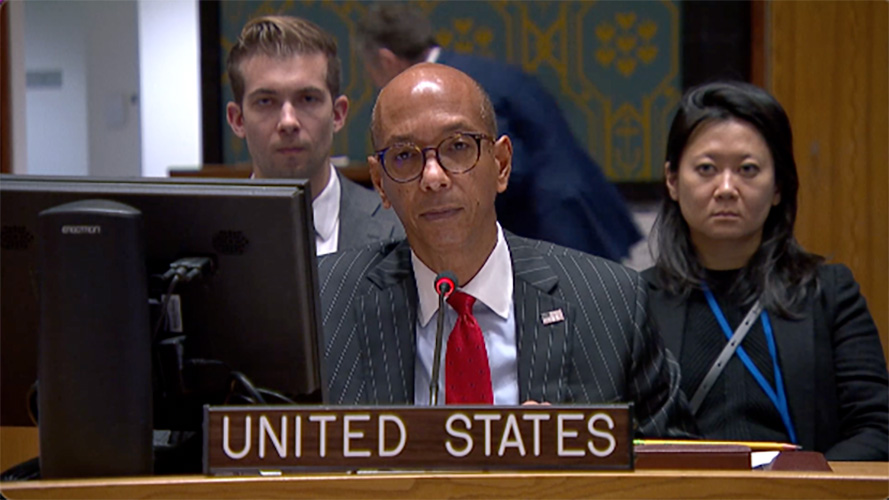 Thank you. Madam President, and thank you, SRSG Otunbayeva and Under Secretary General Griffiths, for your presentations. And thank you Ms. Seraj for your very sobering briefing on the overall situation in Afghanistan. The international community should take heed of your warning about the growing threat of terrorism emanating from Afghan soil. The United States would also like to thank the UNAMA team for its ongoing work and tireless commitment towards implementing the Security Council’s mandate in support of the Afghan people and of international peace and security under challenging circumstances.

As we all know, the reality on the ground more than one year after the Taliban takeover is dire. The Taliban has restricted the enjoyment of human rights by women and girls. This includes their right to education, movement, and peaceful assembly, as well as women’s right to work. Many independent media outlets have closed or been heavily censored. Those who dare to speak against the Taliban are frequently detained or worse. The Taliban’s actions have caused the economy to continue to decline, and Afghanistan’s already overwhelming humanitarian needs are growing.

It is not only women and girls who are impacted. We’ve seen the reports that the Taliban ordered judges to impose a strict interpretation of Sharia law. That interpretation includes carrying out public executions, amputations, and floggings. These punishments are an affront to the dignity and the human rights of all Afghans.

Many Afghans continue to reject these actions by the Taliban. As the Taliban increasingly adopt its old practices, it moves further from normalization with the international community and the recognition it desires.

We remain grateful for UNAMA’s efforts inside the country, including its work to foster dialogue at sub-national levels, and its urging of all stakeholders to respect human rights. We believe UNAMA is well-positioned to convene key stakeholders at the local and national level, including women and civil society groups, in ways that promote meaningful dialogue with the Taliban on a range of important issues.

As the world’s leading humanitarian donor, the United States has always understood the centrality of humanitarian aid to help Afghans recover from a crippling economic crisis, decades of conflict, and recurring natural disasters. We have provided more than $1.1 billion in humanitarian assistance since August 2021, and we will continue to address the needs of vulnerable Afghans in Afghanistan and those who have fled to neighboring countries. Our humanitarian aid has been, and will remain, unconditional, impartial, and consistent with humanitarian principles.

We are proud to have championed Resolution 2615 last December, which maintained sanctions on bad actors while enabling humanitarian organizations to provide urgently needed humanitarian assistance and other activities that support basic human needs in Afghanistan. We note as well that this resolution maintains an oversight mechanism to mitigate assistance diversion to sanctioned individuals.

We remain steadfast in holding the Taliban accountable to their commitments to the Afghan people and the international community. We expect the Taliban to follow-through with their commitments on counterterrorism in alignment with the Doha agreement. We also expect the Taliban to allow safe passage and freedom of movement; to make efforts to build an inclusive system that gives the people a voice in their political future; and to take responsibility for efforts aimed at supporting economic stability.

Without a serious national political dialogue among Afghans about the future of their country, we could see the reemergence of conflict. We regularly hear from Afghans that they do not want to see a return to conflict. We also see there is an active dialogue underway among Afghans, inside the country, at subnational levels, and in the diaspora. The United States supports these Afghan-led efforts toward a political dialogue.

The United States has repeatedly stated that the legitimacy and support that the Taliban seeks from the international community begins with the legitimacy they earn from the Afghan people through their actions.

We will continue to work closely with UNAMA to aid the Afghan people now and in the future.