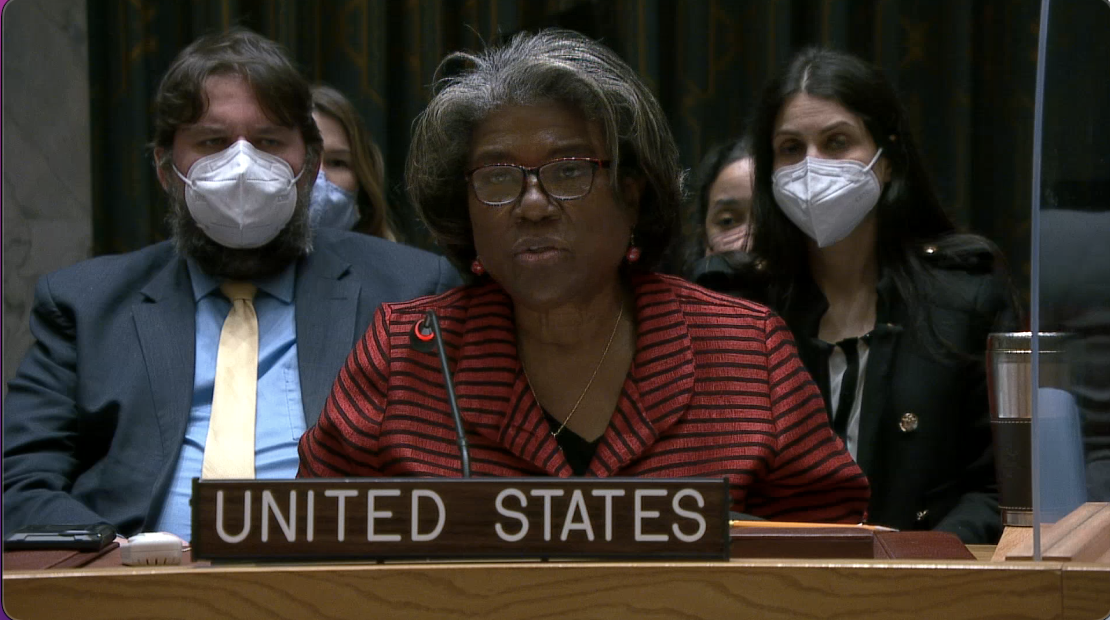 Thank you, Mr. President. And thank you to our briefers for your remarks this morning.

Russia asked the Security Council for today’s meeting for the sole purpose of lying and spreading disinformation, and that is exactly what you have heard from the Russian PR this morning. You also heard from Ms. Nakamitsu that the UN is not aware of any biological or chemical weapons programs in Ukraine.

Last month, Secretary Blinken laid out with tragic accuracy what Russia was about to do. He specifically warned that Russia would manufacture a pretext for attack, and even cautioned that Russia would fabricate allegations about chemical or biological weapons to justify its own violent attacks against the Ukrainian people. Today, the world is watching Russia do exactly what we warned it would. Russia is attempting to use the Security Council to legitimize disinformation and deceive people to justify President Putin’s war of choice against the Ukrainian people. And China, too, has been spreading disinformation in support of Russia’s outrageous claims.

So here are the facts: Ukraine owns and operates its own public health laboratory infrastructure. These facilities make it possible to detect and diagnose diseases like COVID-19, which benefit us all. The United States has assisted Ukraine to do this safely and securely. This is work that has been done proudly, clearly, and out in the open. This work has everything to do with protecting the health of people. It has absolutely nothing – absolutely nothing – to do with biological weapons.

And we are deeply concerned that Russia’s calling for this meeting is a potential false flag effort in action – exactly the kind we have been warning about, including from Secretary Blinken here in the Security Council last month. Russia has a track record of falsely accusing other countries of the very violations that Russia itself is perpetrating. And given that and consistent with our previous statements, we have serious concerns that Russia may be planning to use chemical or biological agents against the Ukrainian people. The intent behind these lies seems clear, and it is deeply troubling. We believe Russia could use chemical or biological agents for assassinations, as part of a staged or false flag incident, or to support tactical military operations. From the beginning, our strategy to counter Russia’s tactics has been to share what we know with the world transparently. And candidly, we have been right more often than we’d like.

We’re not going to let Russia get away with lying to the world or staining the integrity of the Security Council by using this forum as a venue for legitimizing Putin’s violence. Russia has attacked homes, schools, orphanages, and hospitals. Russia has attacked civilian infrastructure, including water and sanitation facilities. Their forces are laying Ukrainian cities under siege. Hundreds of thousands of civilians now don’t have access to electricity for heat or drinking water to stay alive. Russia is the aggressor here.

And despite Russia’s best efforts, the media – and everyday Ukrainians – are documenting this truth on the ground. Russia can’t paint over the front page of the New York Times, which on Monday featured the bodies of a Ukrainian mother and her two children who died while trying to cross a bridge outside Kyiv in their attempt to flee to safety. Russia cannot cover up the work of AP news reporters who captured a doctor attempting to resuscitate an 18-month-old, Kirill, who died from Russian shelling in Mariupol. Russia cannot suppress the social media post, confirmed and amplified by CBS News, that told the story of the 11-year-old Ukrainian boy who fled to Slovakia, by himself, with only a passport, a plastic bag, and a phone number scrawled on his hands. Russia cannot silence the Al-Jazeera report of Russian soldiers terrorizing Ukrainian cities. And Ukrainian journalists are risking their lives every day to deliver to the world the latest on the ground facts, such as Novoe Vremye reporting on the reckless behavior of Russian forces towards Ukraine’s nuclear facilities.

Russia is failing in its quest to create an alternative reality. In fact, not even Russian diplomats can keep their propaganda straight. Just yesterday, the Kremlin’s spokesman said he didn’t have clear information about the Russian forces who fired on a maternity hospital. Then the Foreign Minister himself denied Russia attacked Ukraine at all, right before admitting that Russia deliberately targeted this maternity hospital in Mariupol. Their fabrications didn’t matter, because the world had already seen the searing images broadcast on CNN of bloodied pregnant women being evacuated from the scene of Russia’s attack on the hospital.

Even Russia’s own citizens are tiring of such lies. Russian athletes are writing “no war” on their shoes and on TV cameras. Russian citizens are marching in the streets and protesting Putin’s war of choice. And even Russian state TV pundits – Putin’s own propaganda arm – have called for Putin to stop the military action.

This is why we didn’t object to holding today’s meeting. Today’s meeting has confirmed our predictions, revealed Russia’s objectives to the world, and exposed Russia’s lies for what they are – a malicious effort to cover for the atrocities being committed by Russia as part of their illegal and unprovoked attack on Ukraine. It is a page directly out of the Russian playbook, and it will not convince us one bit.

The world is watching. Photographic and video evidence is mounting, and you will be held to account for your actions. We will not let atrocities slide. Unlike the Russian government – whose first instinct is to silence – we are confident that truth and transparency will prevail.

We call on President Putin to end this unprovoked, unconscionable war against the Ukrainian people.