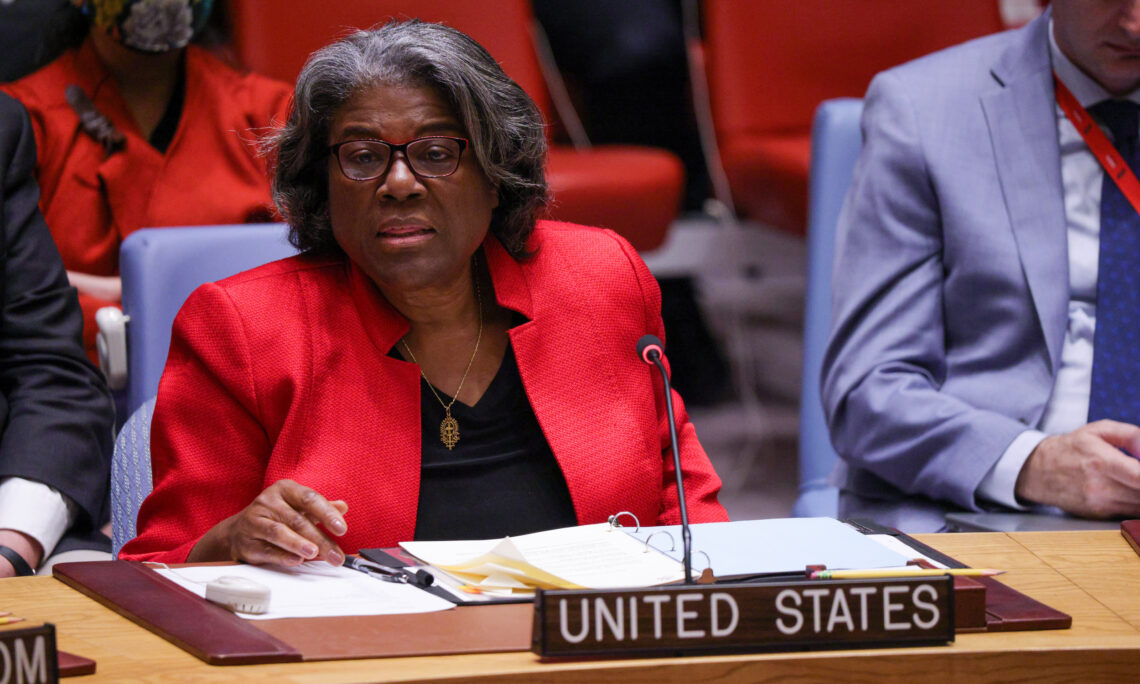 Colleagues, I am going to keep my remarks short because, frankly, this meeting is a waste of everyone’s time. Russia has called us here, once again, for the sole purpose of spreading disinformation. We all know these claims are pure fabrications, brought forth without a shred of evidence. And I would even venture to say the Russian delegation knows these charges are fabricated. But they dutifully carry out marching orders from President Putin.

Still, I must take this opportunity to set the record straight.

We hear Russia raise alarms that biological weapons will be delivered by birds and bats and now even mosquitoes. Birds and bats. Russia knows public health laboratories routinely study migratory animal species to assess and counter animal-borne pathogens. Bear in mind, much like Russia, birds and bats don’t tend to observe or respect sovereign borders. Russia’s assertions are absurd for many reasons, including because such species, even if they could be weaponized, would pose as much a threat to the European continent and to Ukraine itself as they would to any other country.

Ukraine’s scientific studies do not amount to a malicious conspiracy. To the contrary, they constitute a laudable public health campaign. The United States is proud to have assisted Ukraine in doing this work safely and securely as we have with other countries.

Respecting the Biological Weapons Convention, we presented our arguments in detail in the Article V Consultative Meeting of States Parties to the Convention in Geneva just last month. Russia failed to convince the States Parties of its false claims in Geneva. Now it is trying to see if its lies can gain traction in the Security Council. But Russia will continue to be frustrated, because unfortunately for them, facts don’t lie. We take our obligations under the Biological Weapons Convention seriously and participate fully, transparently, and with integrity in the procedures outlined in this treaty.

Colleagues, Russia is right to claim this Council has the power to investigate violations of certain international obligations. And that’s exactly why we believe there should be an investigation into whether Russia illegally procured Iranian Unmanned Aerial Vehicles, or UAVs. But here’s the difference – and it’s a big one – we have ample evidence of our claims. All Russia has are bizarre conspiracies – conspiracies that are no more credible today than when they were first brought it to this Council six months ago.

So, while I believe this meeting is a colossal waste of time – and we should decide just how much of our time we allow Russia to waste – I am glad this Council has the chance to see Russia’s disinformation campaign for what it is: An attempt to distract from the atrocities Russian forces are carrying out in Ukraine and a desperate tactic to justify an unjustifiable war.

It doesn’t matter how many meetings Russia tries to call on this subject. And it doesn’t matter how hard it ratchets up its propaganda machine. We must not divert UN resources toward a baseless investigation. And we must not allow Russia’s tactics to distract us from its brutal war of aggression. To do so would be to give in to lies and undermine the credibility and the dignity of this Council.

My Russian colleague said that the current situation is unacceptable and should be rectified. What situation? The only unacceptable situation is Russia’s war of aggression against Ukraine, and we call on Russia to rectify this by withdrawing its forces from Ukraine and end this war now.