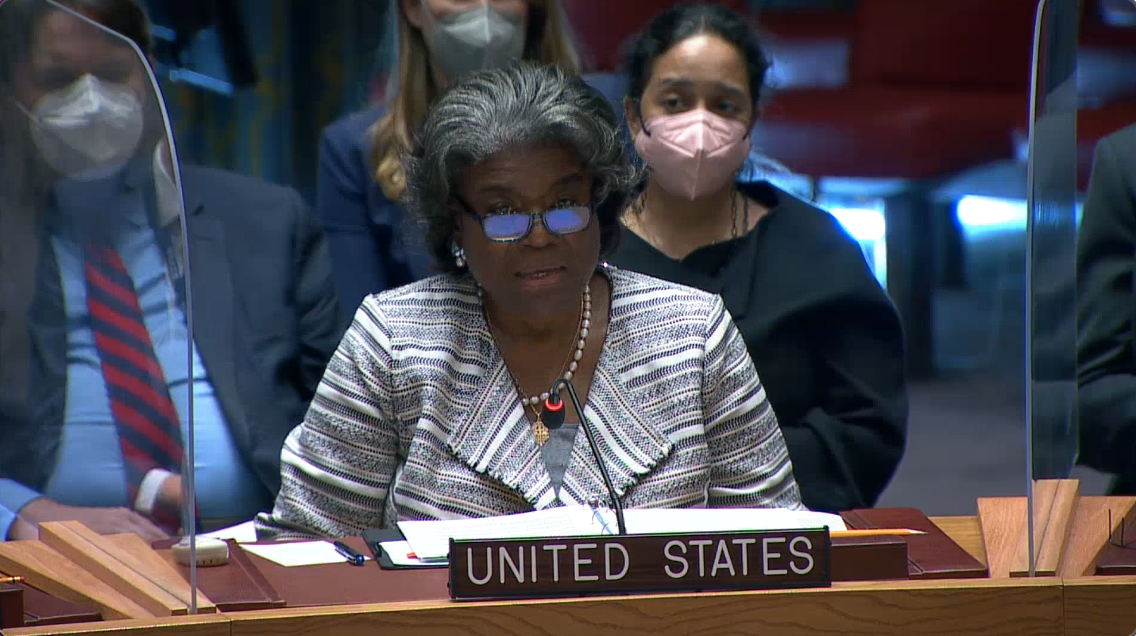 Thank you, Mr. President. And thank you High Representative Nakamitsu for joining us today to repeat exactly what you gave us last week.

And last week, we heard from the Russian representative a tirade of bizarre conspiracy theories. This week we’re hearing a whole lot more where that came from, things that sound like they were forwarded to him on a chain email from some dark corner of the internet. President Biden has a word for this kind of talk: Malarkey.

As I said one week ago, Ukraine does not have a biological weapons program. There are no Ukrainian biological weapons laboratories – not near Russia’s border, not anywhere. There are only public health facilities, proudly – and I say proudly – supported and recognized by the U.S. Government, the World Health Organization, and other governments and international institutions.

Let’s not forget why we’re really here today: we’re here because Russia knew its cynical ploy to pass an exculpatory resolution had failed. This meeting is the result of their isolation on this Council and on the world stage. We’re not buying what they’re selling – literally or figuratively.

And I will reiterate the United States’ deep and serious concern that Russia’s calling for this meeting is– is – a potential false flag effort in action. Russia has repeatedly – repeatedly – accused other countries of the very violations it plans to perpetrate. We continue to believe it is possible that Russia may be planning to use chemical or biological agents against the Ukrainian people.

We aren’t going to dignify Russia’s disinformation or conspiracy theories. But we will continue to sound the alarm and tell the world where we think Russia is heading. And we will remind the world that Russia has repeatedly – repeatedly – lied to this Council over recent weeks. Despite all the evidence we could see with our own eyes, it told us that it was not going to invade Ukraine, that it was engaged in war games, that it was interested in diplomacy.

I asked the Russian PR where are the 100,000 troops who were sitting on the Russian side of the border now? Sadly, I think many of them have given their lives in this senseless, unconscionable war against the Ukrainian people. Russia lied to its own people as well – shutting down media to try and hide the truth. And I will not repeat the slurs and false accusations that Russia has hurled against the Ukrainian people and the United States repeatedly at this table.

But we know that Russia’s disinformation is a sign of its desperation. That’s the truth, and we will continue to ensure the world sees it and hears it.