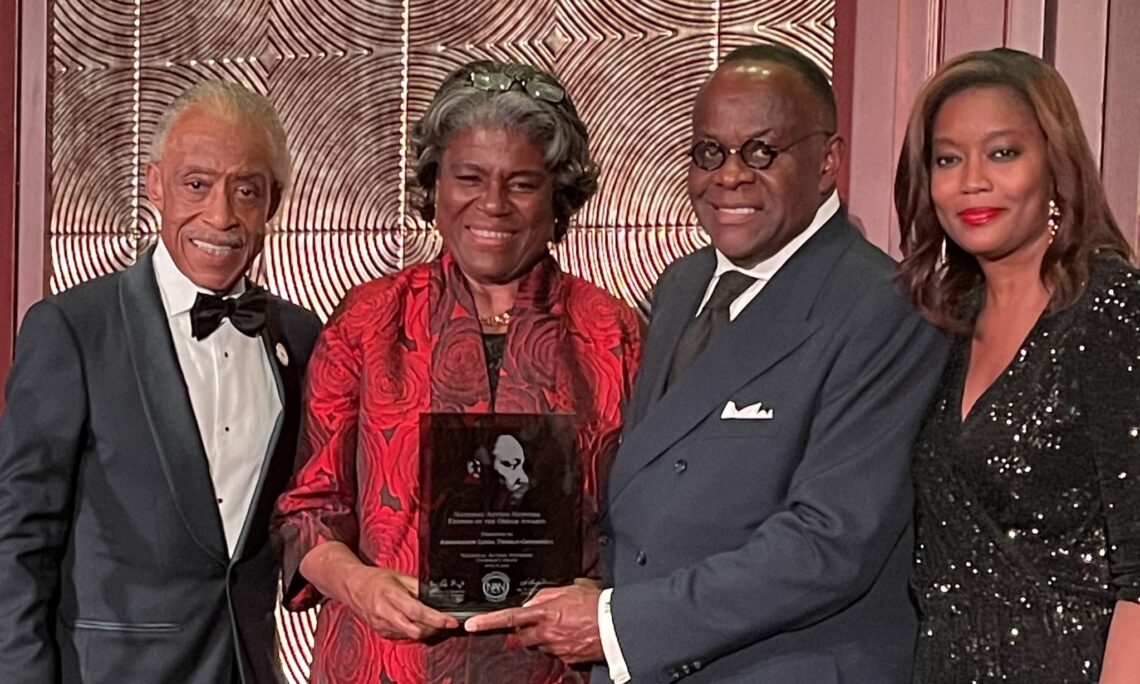 Reverend Al, thank you very much. You know, for decades, under the leadership of Reverend Al Sharpton, you have been on the front lines fighting for racial, social, and economic justice. You have committed, over and over again, to helping our nation live up to its highest ideals. And our country and our world is so much better for it. What you do is a form of public service. And as someone who has spent a career in public service, I can tell you that you never know where your commitment to bettering the world might take you.

So, growing up in a poor family, I’m the eldest of eight kids from the segregated South, from Louisiana, I’m not sure I could have ever predicted, even, say, last Tuesday. I started that day in the chamber of the United Nations Security Council, sitting behind the placard representing the United States, a whole bunch of people sat behind that placard that I never knew that I would ever come near to being similar to. Ambassador Andrew Young sat behind that placard. (applause). And I was sitting there that day, last Tuesday, debating the global response to a crisis in Africa. And then I jumped up from my chair, I then flew to Washington and found myself in the Rose Garden of the White House and I watched President Biden sign the Emmett Till Anti-Lynching Act (applause), making lynching a federal hate crime for the first time in American history. And I saw Reverend Al there. I then moved to the National Security Advisor’s office, in the West Wing, to discuss our Ukraine strategy and how to respond to North Korea’s dangerous missile launches at the UN. Then that evening and I saw some of you there, I went to a celebration hosted by our country’s first Black woman Vice President in honor of Women’s History Month. (applause)

And all through the day, I kept pinching myself. I kept asking myself, how did I get here? How did I get here from where I came from? And it’s thanks to people like Reverend Al that paved the way for all of us. And I know that it is my responsibility to pave the way for the people who are behind me. That Tuesday is not a day I could have imagined growing up. To me, that’s a marker of just how far we have come. And my mother is not here to see what her daughter became, but everything I became it was because of her. (applause). Now, some people want to forget where we came from. They want to pretend that’s not our history. But I lived that history. It’s my history. I know it. And I own it. And it’s what I keep front and center when I look at what’s happening to vulnerable people all over the world.

That’s why, right now, I am so focused on what is happening in Ukraine. After all, the wars men like President Putin start are not fought by them. They are not fought by the rich, the powerful, the privileged. They are fought by young, poor, and disadvantaged. The children of oligarchs somehow never get conscripted. And it’s the civilian women and children and the most vulnerable who end up getting maimed, raped, or killed in the crossfire.

It’s a pattern I’ve seen my entire career, across continents. It is true in Syria and Burma, and Afghanistan, Ethiopia and Yemen, and in so many other conflicts that we can’t forget about, even as we focus on Ukraine every day. And it’s why what’s happening in Ukraine is not just about Ukraine. It is about all of us. As just one example, Ukraine was once the breadbasket for the developing world. Now, Ukrainian civilians wait in breadlines. And as we’ve seen, sometimes Russian forces shoot the people waiting in those lines. Because of this, food is also not getting to countries in dire need. Russia’s war is increasing the prices of key food commodities in regions in the Middle East and Africa. And it’s making desperate hunger situations even more dire. My point is our world is deeply interconnected. What’s happening in Ukraine affects us all.

This past weekend, I took a trip to Moldova and Romania where I met with some of the four million refugees and counting that have fled Ukraine because of Putin’s horrific war. I’ve worked on humanitarian and refugee issues my entire career. And still, the scale of what I saw astounded me. I had a heart-to-heart with a woman who had to leave her ailing, elderly parents behind. I spoke with another woman with four small children, alone and by herself in a new country, not knowing if she would ever see her husband or her home again. Just imagine.

A third woman I met used to love to travel, but never expected her next trip would be to flee for her life. When I asked her where she was from, and she started to say, and she stumbled. Tears came to her eyes. And she said “I’m sorry, I don’t know how to say it. Whether I live in Kyiv, or whether I used to live in Kyiv.” She was realizing, in that moment, just how dramatically her life had changed because of the senseless war that Putin started. The people of Ukraine deserve our compassion and they also our admiration. The way they are fighting for their lives and for their country defying everyone’s expectations shows what people do when everything—everything—is on the line. They are fighting for sovereignty. They’re fighting for dignity. And perhaps most importantly, they’re fighting for democracy. That’s why Putin felt threatened by Ukraine, because it was a burgeoning democracy. And he knows that when people see freedom next door, they start asking themselves why can’t they have freedom, too.

This year’s conference theme: “Saving our Democracy,” is so timely for precisely that reason. Because governments of the people, by the people, and for the people must stick together. Ukraine has underscored how a thriving democracy, where people have a voice and are invested in building for the future, are stronger and more resilient. It’s one of the reasons Russia’s gambit has failed. They thought they could quickly topple the Ukrainian government. Instead, while Putin engaged in crackdowns, corruption, and conscription, Ukraine’s democratically elected President and millions of Ukrainians have stood together in defense of their democracy, their independence, and their freedom. And their bravery and strength has united the world. As President Biden said in Poland, “the democracies of the world are revitalized with purpose and unity found in months that we’d once taken years to accomplish.”

We are proud of the way the world’s democracies have rallied to stand up for Ukraine. And it underscores why ensuring our democracy continues to thrive is essential. That’s why your work is so important. Our most cherished values are at stake. And when you strengthen our own democracy and democratic institutions, you make our country more powerful, more resilient, more secure. That’s important in its own right. And it’s critical for strengthening democracy around the world.

This evening is named in honor of Dr. King. One of his close friends—a man who marched beside him—was one of my personal heroes, Ralph Bunche. Bunche went on to help found the United Nations and won a Nobel Peace Prize for his efforts. When confronted with the many challenges that beset democracies, Bunche had some wise words that can guide us today. He said, and I quote, “The greatest defense for democracy is its practice.”

The greatest defense for democracy is its practice. He’s right. When we march, we show the power of the people. When we speak up, we show the power of our voices. When we vote, we demonstrate the potency of transparency and accountability. When we practice democracy, we make the case for liberty and freedom across the globe. Nothing could be more threatening to a dictator than democracy. And it is why I am so heartened, here today, by the work of everyone in this room. May we all continue to defend our democracy through its practice for the next decades to come.

Thank you. And thank you, Reverend Al.