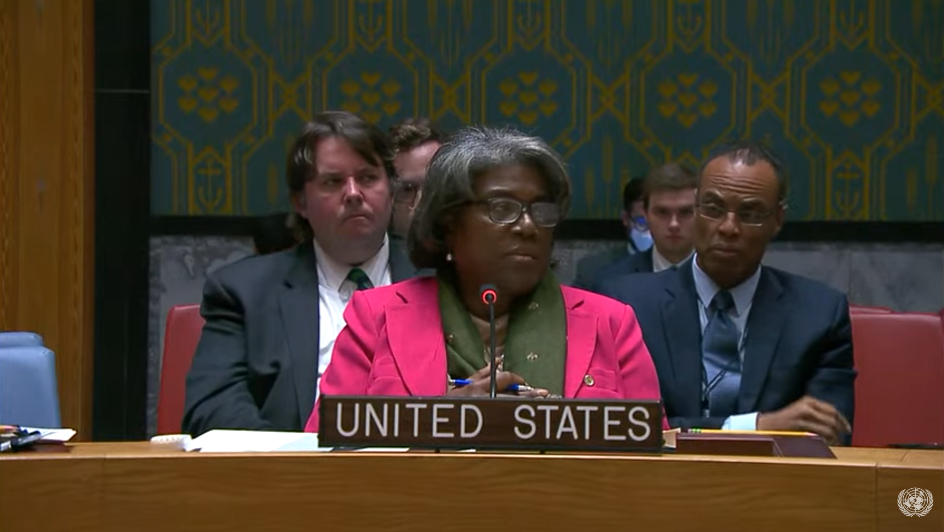 I felt I had to take the floor again. As we expected, instead of putting the blame where the blame lies – on the DPRK – Russia and China want to blame others for their actions.

Firstly, the United States and the ROK carry out defensive military exercises responsibly and consistent with international law. These exercises improve readiness critical to deterrence and responding to regional threats. Ballistic missile launches by the DPRK are unlawful, they’re reckless, and they endanger neighbors in the region, and there’s no equivalency between these two activities.

Secondly, also as expected – and we’ve said this repeatedly in this chamber – AUKUS does not violate the NPT. We take our NPT obligations very seriously. And I know the UK and Australia do so as well. And it’s worrisome that Russia and China insist on distracting us from discussions on the DPRK’s clear attempts to undermine the global non-proliferation regime with false claims. These country’s attempts to defend DPRK should not go unnoticed.

And finally, the draft resolution that China and Russia have proposed is predicated on their assessment that the DPRK is showing goodwill through a moratorium – and I say, “what moratorium?” The DPRK has shown repeatedly this year, that such a moratorium does not exist.

This is a clear effort by China and Russia to reward DPRK for their bad actions and cannot be taken seriously by this council.

In light of the DPRK’s escalating provocations and it’s returning to testing long-range systems – the purported basis for the resolution has no validity here – we need to turn quickly to strengthening the 1718 sanctions regime, not considering sanctions relief.

You’ve heard all members of this council except Russia and China, condemn the DPRK’s actions today. And I will say finally – on the question of humanitarian – it is clear, and it has been repeatedly stated, that the only barrier to sending humanitarian assistance to the DPRK, is the DPRK itself. Their own self-imposed border closures, not international sanctions, as our colleagues have alleged.