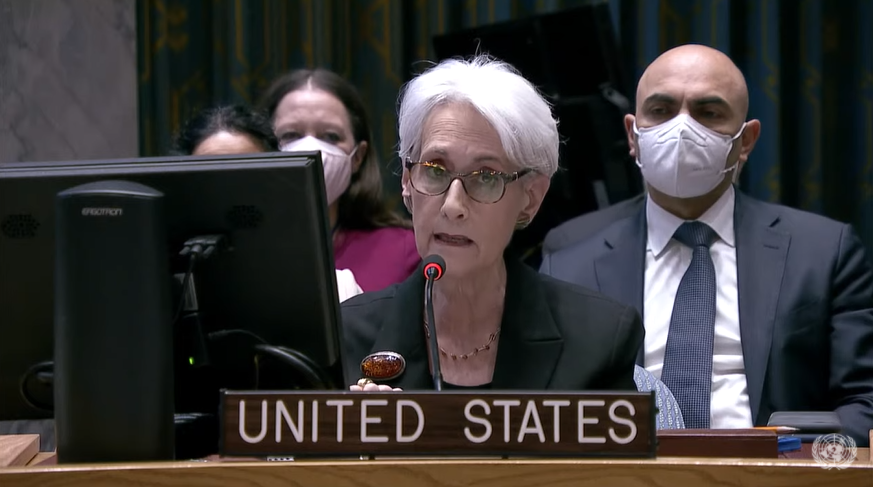 Thank you very much and thank you for giving me this opportunity today. Much appreciated, Madam President. I feel that I must make four critical points.

First, I want to be clear that the conflict that is being suffered by the Ukrainian people is not about the Russian Federation versus the West. One hundred and forty countries, just last week, spoke in support of ending this conflict and the need to end this humanitarian crisis. A hundred and forty-one countries supported the initial resolution in the UN General Assembly, to say that this invasion by Russia should stop.

So, with all due respect, Mr. Ambassador, this is not about Russia versus the West. This is about the support of the UN Charter and the principles of sovereignty, territorial integrity, and the right of all countries – all countries – to choose their political orientation and their foreign policy.

Second, I myself was engaged directly with Russian counterparts to find a peaceful way forward to meet the concerns of the Russian Federation. I sat opposite Russian counterparts and put on the table many options to address the concerns. We provided, as does NATO, a paper of very specific ways in which we could address, reciprocally and mutually, security concerns. President Putin chose an invasion, not diplomacy.

Third, with all due respect, Mr. Ambassador, as a Jewish American, I cannot help but say this is not about Nazis in Ukraine. Last week, former U.S. Secretary of State, and former Permanent Representative to this Council, and one of my most cherished personal friends, Madeleine Albright died. She loved representing the United States here. She would have been outraged by the words of the Russian Federation today.

Later in her life, she learned that her parents raised her as Catholic to protect her from the Nazis because her family was Jewish. She learned that three of her grandparents died at the hands of the Nazis, while in concentration camps. She knew that the Jewish President of Ukraine was certainly not a Nazi. And that the citizens of Ukraine being slaughtered and starving, and without food and medicine, and the subject of this humanitarian dialogue today, are not and never were Nazis.

And finally, this dialogue today is about the humanitarian needs of Ukrainian civilians and humanitarian needs of people around the world, who as David Beasley said so eloquently, “feeding hungry children, to feeding starving children.” It’s about, as he said, “going from a breadbasket to a breadline.”

We must all do whatever we can, of course, to stop war. But there is an easy choice here. And it is a choice that can be made today in Istanbul, by President Putin, and that is to stop the war. So let us all, over 140 countries around the world, continue to stand with Ukraine.