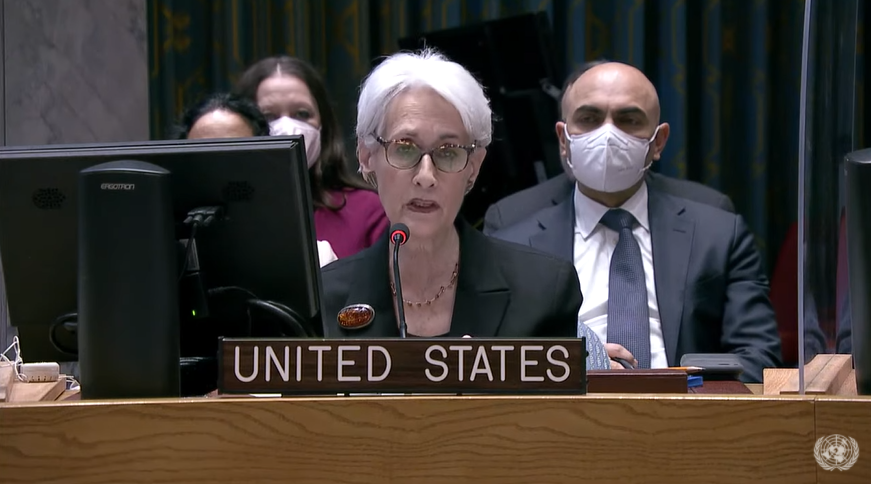 Thank you, Madam President, for welcoming me to represent the United States at the Security Council today. And thank you, Assistant Secretary Msuya and Executive Director Beasley, and welcome, Deputy Executive of the WFP Abdulla, for your briefings today. And, of course, I welcome the Ambassador from Ukraine.

It has been five weeks – five weeks – though it feels like a lifetime, since Russian President Vladimir Putin launched his premeditated, unprovoked, unjustified, and brutal invasion of Ukraine. In just five weeks, nearly a quarter of Ukraine’s population has been displaced, including more than half of the nation’s children. In just five weeks, nearly four million Ukrainians have fled their country as refugees. Now, the World Food Program warns that 45 percent of the people in Ukraine – nearly half of the people living in one of the world’s great breadbaskets – are concerned about having enough to eat.

Russia’s ceaseless bombardment of Ukraine’s cities and critical infrastructure has created one of the fastest-growing humanitarian crises in recent decades. Russian forces have laid siege to cities like Mariupol, where citizens have been left without food, water, heat, or electricity in the depths of winter. People have resorted to melting snow for drinking water. One mother told reporters she could feed her three daughters only a spoonful of honey a day as they hid from Russian bombs. Now, city officials say people are beginning to die – to die – of starvation. Think about that. Five weeks ago, Mariupol was at peace. It was, in fact, a bustling port city, a grain exporter that helped feed the world. Today, its residents are dying because of President Putin’s war of choice.

The impacts of Putin’s war are being felt far beyond Ukraine’s borders, as well – with some of the most immediate and dangerous implications for global food security. As has been said, Ukraine and Russia are both major agricultural producers. Thirty percent of the world’s wheat exports typically come from the Black Sea region, as does 20 percent of the world’s corn and 75 percent of sunflower oil.

But Russia has bombed at least three civilian ships carrying goods from Black Sea ports to the rest of the world, including one chartered by an agribusiness company. The Russian Navy is blocking access to Ukraine’s ports, essentially cutting off exports of grain. They are reportedly preventing approximately 94 ships carrying food for the world market from reaching the Mediterranean. It’s no wonder many shippers are now hesitant to send vessels into the Black Sea, even to Russian ports, given the danger posed by Russian forces.

Russian missiles and bombs have damaged and destroyed Ukrainian airports, rail lines, train stations, and highways that are critical for getting humanitarian aid to those who need it – and for exporting wheat, corn, and other commodities. Ukrainian Foreign Minister Kuleba has told his counterparts that Russia is actively targeting grain silos and food storage facilities. All of these actions by Russia are creating a food crisis in Ukraine – and well beyond Ukraine’s borders.

Already, food prices are skyrocketing in low- and middle-income countries as Russia chokes off Ukrainian exports. Across the Middle East and Africa, already-high prices for staple commodities, including wheat, have risen between 20 and 50 percent so far this year. We are particularly concerned about countries like Lebanon, Pakistan, Libya, Tunisia, Yemen, and Morocco, which rely heavily on Ukrainian imports to feed their populations.

The world, as we have heard, was already facing a food security crisis well before Russia’s invasion of Ukraine. The COVID-19 pandemic and the resulting economic crisis pushed millions of families into poverty. Countries around the world are grappling with drought and other disasters made worse by climate change. As we heard from Executive Director Beasley, the World Food Program is already feeding 138 million people in more than 80 countries – from Ethiopia to Afghanistan, South Sudan to Yemen, Nigeria to Syria. But now, Putin’s war is driving up the costs of providing food assistance. And the Food and Agriculture Organization, FAO, estimates that as many as 13 million more people worldwide may be pushed into food insecurity as a result of Russia’s invasion of Ukraine.

Many of you have heard the Russian government blame U.S., allied, and partner sanctions for increasing food costs around the world. But the facts – the facts – colleagues, are clear: Sanctions aren’t preventing grain from leaving Ukraine’s ports; Putin’s war is. And Russia’s own food and agricultural exports are not under sanction by the U.S. or by our allies and partners. The responsibility for waging war on Ukraine – and for the war’s effects on global food security – falls solely on President Putin.

The international community must come together to meet this moment to provide food, water, shelter, and medicine for the Ukrainian people; to support Ukraine’s neighbors, who have taken in millions of refugees; and to bolster global food security, and protect the world’s most vulnerable from hunger as a result of Putin’s war.

The United States is committed to doing our part to ease the human suffering caused by this war in Ukraine and elsewhere around the world. Last week, President Biden announced that the United States is prepared to provide more than $1 billion in new humanitarian assistance for the Ukrainian people, those fleeing to neighboring countries, and those around the world feeling the effects of Putin’s war, including rising food insecurity.

The United States has also committed to provide more than $11 billion over the next five years to address food security and nutrition needs around the world, including in countries where food prices are rising as a result of Putin’s invasion of Ukraine.

But the fact remains that so long as Putin continues his war, so long as Russian forces continue to bombard Ukrainian cities and block aid convoys, so long as besieged civilians are unable to get to safety, this humanitarian crisis will only get worse – in Ukraine, for the Russian people, and around the world.

We hope – we really hope – that President Putin will commit seriously to the peace talks underway. But we are focused on what Russian forces do, not what Russia says. Not what Putin says. And ultimately, the only way to end this humanitarian catastrophe is through a durable ceasefire and the complete withdrawal of Russian forces from Ukrainian territory and away from Ukraine’s borders.

That decision – like the decision to begin this unprovoked, unjustified war in the first place – lies with one man and one man only. Vladimir Putin started this war. He created this global food crisis. And he is the one who can stop it.