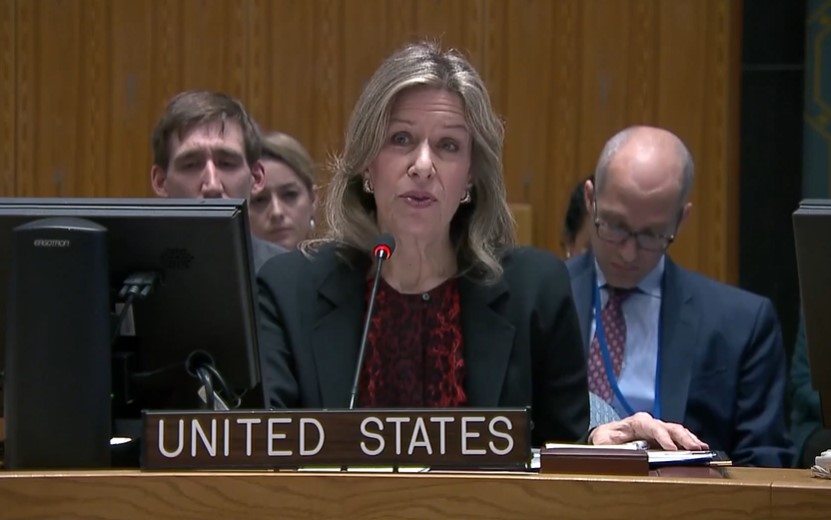 Mr. President, I want to begin by expressing my gratitude to you for bringing us all together and for elevating this vital conversation. Your country is on the frontlines, surrounded by security threats on your borders. Your government has developed a thoughtful approach to countering terrorism, and you have distinguished yourself as a regional leader who is committed to deepening collaboration and cooperation with your neighbors in the face of this existential threat.

I also want to thank Deputy Secretary General Mohammed, Chairperson Faki, Director von Seherr-Thoss, and Dr. Ero. I have listened closely to each of you and have learned a lot.

The United States fully agrees that none of us can effectively meet the terrorism challenge alone. Our experience since September 11, 2001 – and even before that – has proven that we are much stronger when we stand together in the fight against terrorism so that we can enable people to build peaceful lives and live free from fear.

I would like discuss this growing threat to Africa and how the United States is approaching it. And most important, I would like to offer perspective on how we can do even more together. As you all know, countering terrorism has been a top priority for the United States for two decades and even before. But over the years, the threat has evolved. It has become more ideologically diverse. And it has become more geographically diffuse.

Nowhere is this evolution in the global terrorism landscape more vivid than in Africa, where terrorist groups, from al-Qa‘ida branches to ISIS affiliates, now collectively occupy vast swaths of territory and extract benefits from millions of suffering people. Across every region of the vast continent, they brutalize and terrorize civilians.

In Burkina Faso, terrorist groups attack villagers and displace farmers from their sole source of income.

In Nigeria, ISIS affiliates have massacred worshipers in churches.

In Mozambique last year, hundreds of Islamic militants linked to ISIS laid siege to an entire town, holding guests in a hotel hostage.

In Mali, violent extremists continue to kill UN peacekeepers, making the MINUSMA one of the most dangerous peacekeeping missions in the world.

In Kenya, al-Shabaab has threatened election workers and polling sites, and targeted universities, shopping centers, and other locations that people frequent.

And in Somalia, al-Shabaab targets and kills civilians—including more than 100 Somali educators and first responders during tragic bombings less than two weeks ago where an additional 300 people were injured.

Across the region, terrorists also attack Americans and other foreign citizens, including from countries represented around this table. Still, there is reason for optimism where populations are rising up against terror to reclaim their communities. The United States stands with African Governments and the African people who are confronting this threat every day.

Counterterrorism successes are hard-won and often take place out of the public view. Unfortunately, terrorist acts are far more visible. According to the U.S. Department of Defense, violence from militant Islamist groups in Africa has risen 300% over the last decade with 95% of that increase concentrated in the Western Sahel and Somalia. And as I have discussed with President Bazoum and President Hassan Sheikh Mohamud, and as I expect to discuss today with President Akufo-Addo — this violence is only rising.

So as members of the Security Council know: Terrorism in Africa is a shared challenge. And it demands a collective response.

The United States is doing three key things to tackle this threat. First, we are investing in governance, development, and diplomacy. Second, we are deepening our ties with our African partners and empowering them to take the lead on this challenge. And third, we are leveraging the collective strength of the international community, including the UN. I want to take a few minutes to discuss each of these.

First, as I said, we are investing in governance, development and diplomacy. The United States is pursuing an integrated strategy: One that addresses the drivers of radicalization. One that supports effective governance. And one that recognizes that stability and security are intertwined with opportunity and prosperity.

It is not just about fighting terrorists, it is about promoting economic opportunities that offer more attractive alternatives to young recruits than the terrorism enterprise would do and building institutions and capacity to hold those who commit acts of terror to account through strong law enforcement and judicial systems.

Second, we are deepening our ties with our African partners and empowering them to take the lead on this challenge. I have travelled to Djibouti, to Somalia, to Kenya, and to Niger in my current role. I have seen firsthand how our diplomats, our intelligence professionals, and our military service members rely on local partners to understand and respond to terrorist threats. A successful counterterrorism strategy in Africa must always be built on and led by citizens of the countries that we are working to support.

Our partners include local law enforcement, military personnel, public servants, and regional bodies—such as the African Union and its Regional Economic Communities. The United States is asking our partners to identify and communicate their counterterrorism priorities. We will rely on our regional counterparts to tell us what training and support they need. We will do everything we can to enable them to lead across the African continent. And we will empower them to conduct capacity-building efforts that enable more enduring outcomes.

Third, the United States is leveraging the collective strength of the international community, including the UN. More than 15 years ago, every UN member state signed onto the Global Counterterrorism Strategy—which promoted a shared vision and a common approach to fighting terrorism. But this threat has changed substantially since we adopted that resolution, making the need for collaboration across the world more important than ever.

The United States will continue working with all partners to strengthen the use of UN 1267 sanctions against terrorists to induce a change in behavior. We will maintain our intensive work with the UN Counterterrorism Committees, the Office of Counterterrorism, and Counterterrorism Compact to monitor the latest terrorist threats. We will expand our collaboration to ensure security assistance is well-coordinated so that we maximize our impacts and do not duplicate or waste efforts.

We are eagerly awaiting the recommendations of the ongoing joint assessment on the Sahel—a project undertaken by high-level representatives of the UN, AU, Economic Community of West African States, and Group of Five-Sahel—so that we can provide effective support where it is most needed. The outcomes of this report will be essential in shaping our next steps.

Finally, our joint efforts must be grounded in democracy and built on a respect for the rule of law and human rights in order to succeed over the long term.

When nations use terrorism as a pretext to silence political dissent or interfere with the activities of civil society, the effort to counter terror can become counter-productive—and actually contribute to greater divisiveness, dysfunction, and violence. Similarly, when armed mercenary groups, including the Kremlin-backed Wagner group, commit human rights abuses, the security environment becomes even bleaker, and citizens pay the price.

Let me close with this: As we all know, countering terrorism is a demanding task – and it is an enduring one. The conditions that give rise to terrorism are complex and the perpetrators are innovative and ruthless. But by investing in governance, development and diplomacy, empowering local partners, and—most important—working together in strong and collaborative partnerships, both bilaterally and multilaterally, we can more effectively counter the metatstasizing terrorism threats we face in Africa.

I look forward to continuing our conversation, including next month at the U.S. Africa Leaders Summit in Washington DC. Security, stability, and counterterrorism will be top priorities on the agenda for the heads of state and government whom President Biden will be welcoming to the White House. Our goal is to generate greater understanding and commitment to working together to tackle the region’s peace and security challenges.

Thank you again, Mr. President, for convening this meeting and allowing me to speak to you today.