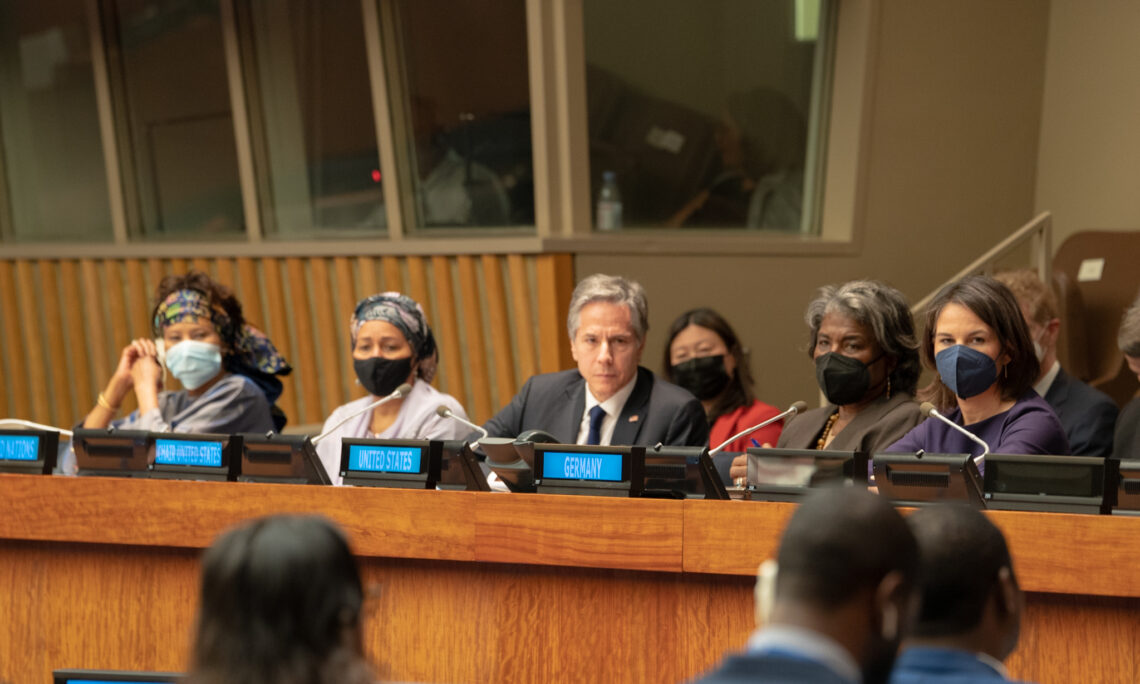 Well, good afternoon, everyone.  Welcome.  Thank you all so much for being here today.

We meet during what is the greatest global food security crisis of our time.  It’s a crisis that we all know has been building for years, driven in part by the pandemic, driven by an accelerating climate crisis.  Between 2016 and 2021, the number of people living in acute food insecurity, the level when a person’s inability to consume adequate food puts their lives or livelihoods in immediate danger, that has skyrocketed from 108 million people to 161 million people around the world.

It was this growing crisis that led Ambassador Thomas-Greenfield to make the nexus between food security and conflict the focus of a UN Security Council meeting that she chaired in March of last year.  And it’s why the United States made robust commitments at the secretary-general’s UN Food Systems Summit last September.

All of that – all of that was before the Russian Government’s unprovoked invasion of Ukraine, which, according to the World Bank, may drive 40 million additional people worldwide into extreme poverty and food insecurity this year.  Indeed, every driver of the crisis that we’ll discuss today has been made worse by President Putin’s war of choice.

That’s why we thought it was so important to convene this high-level group to put a brighter spotlight on the devastating impact of this crisis and to marshal the global effort that is needed to address it.  This is something we’re intently focused on every day at the State Department and across the United States Government.  But it’s a crisis that demands a global response.

Tomorrow, I’ll have the opportunity to lead a session in the Security Council on how conflicts like this one are fueling food insecurity and how rising food insecurity is threatening peace and security around the globe, problems that we have to tackle as parts of a whole.  Today, in our gathering, we want to focus on what we can do to save lives now and address the long-term drivers of this problem.

I’ll start by offering four suggestions, at least on the part of the United States, about what we can do.  But having said that, this meeting is really about hearing the perspectives of a range of colleagues and countries, both on how this crisis is affecting lives in your respective countries but also on what we can do together to address it.

First, from our perspective, we need countries to step up with substantial new contributions to fill the gaps faced by humanitarian organizations and agencies that are battling food insecurity which are forcing humanitarian groups to make incredibly wrenching decisions about when and where to cut lifesaving assistance.  The cost of doing business for vital organizations like the World Food Program, the Food and Agriculture Organization, UNICEF, and others – the cost of doing business is going up.  We have to help them continue to do their business.

In particular, as well, countries with significant grain and fertilizer reserves as well as those with financial resources need to step up and do it fast.  The United States has announced more than $2.3 billion in new funding for emergency food assistance to meet global humanitarian needs since Russia’s invasion of Ukraine.  Today, given the urgency of the crisis, we’re announcing another $215 million in new emergency food assistance.  And we’ll do much more.  We expect our Congress very soon to approve approximately $5.5 billion in additional funding for humanitarian assistance and food security.

Governments and international organizations can also come together to compel the Russian Federation to create corridors so that food and other vital supplies can safely leave Ukraine by land or by sea.  There are an estimated 22 million tons of grain sitting in silos in Ukraine right now, food that could immediately go toward helping those in need if it can simply get out of the country.

Second, we believe we must address the global fertilizer shortage.  Consider Africa, where the cost of fertilizer has already quadrupled since the start of the pandemic and has skyrocketed further since the Russian invasion of Ukraine.  One way to address this is by creating incentives for countries to produce more fertilizer as the United States is doing by committing $500 million to boost U.S. production.  We can also help farmers maximize fertilizer efficiency learning from advances made by countries like Ethiopia.

Some have tried to blame the sanctions imposed on Russian – on the Russian Federation by the United States and many other countries for worsening this crisis.  This is false.  When we imposed sanctions on Russia in order to end the war as quickly as possible, we deliberately and carefully created exceptions for agricultural goods and fertilizer.  We’re working every day to get countries any information or assistance they need to ensure that sanctions are not preventing food or fertilizer from leaving Russia or anywhere else.

As with its decision to start this unjustified war, responsibility for the disruption of these supplies and the suffering that it’s causing around the world lies squarely and solely with the Russian Government.

Third, we believe we must increase investments in agricultural capacity and resilience.  That’s what the United States is doing through our Feed the Future program, which will invest $5 billion in more than 35 countries over five years, as well as our longstanding support of international agricultural research centers.  It’s also the focus of the Agricultural Innovation Mission for Climate*, which we launched a year ago with the United Arab Emirates to try to turbocharge investment in climate-smart agriculture.

Fourth, we believe that we have to help poor and vulnerable populations bear the colossal impact of this crisis.  International financial institutions have a critical role to play in doing this.  That’s why our Treasury Secretary Janet Yellen convened a session with the leadership of the international financial institutions just a few weeks ago and pushed for the development of the International Financial Institution Action Plan to Address Food Insecurity, which was released on the margins of today’s G7 financial ministerial.

Finally, if we want to save lives, we all have to be willing to shoulder added risk.  Last week, President Biden traveled to a family farm in Illinois.  He talked about how farms like the one he visited are working to double crop, harvesting two crops from the same field in the same year.  Now, this is something that doesn’t always work.  The growing seasons are short.  Weather doesn’t always cooperate.  But as the President said, that’s a risk we have to take.  So our government is working to provide additional insurance for American farmers who are willing to give it a try.

If we take these steps together – meeting the urgent need for food, fertilizer, and financing; investing more in the resilience of agriculture and vulnerable populations – we will meet this crisis, we’ll help prevent others like it, most important, we will save countless lives.  That’s what’s at stake, but I’m convinced that if we come together, we can address this challenge.

So thank you so much again for being here.  It’s now an honor and a privilege to give the floor to the secretary-general, who has been a leader in rallying the response to this crisis.

By United States Mission to the United Nations | 18 May, 2022 | Topics: Highlights, Remarks and Highlights