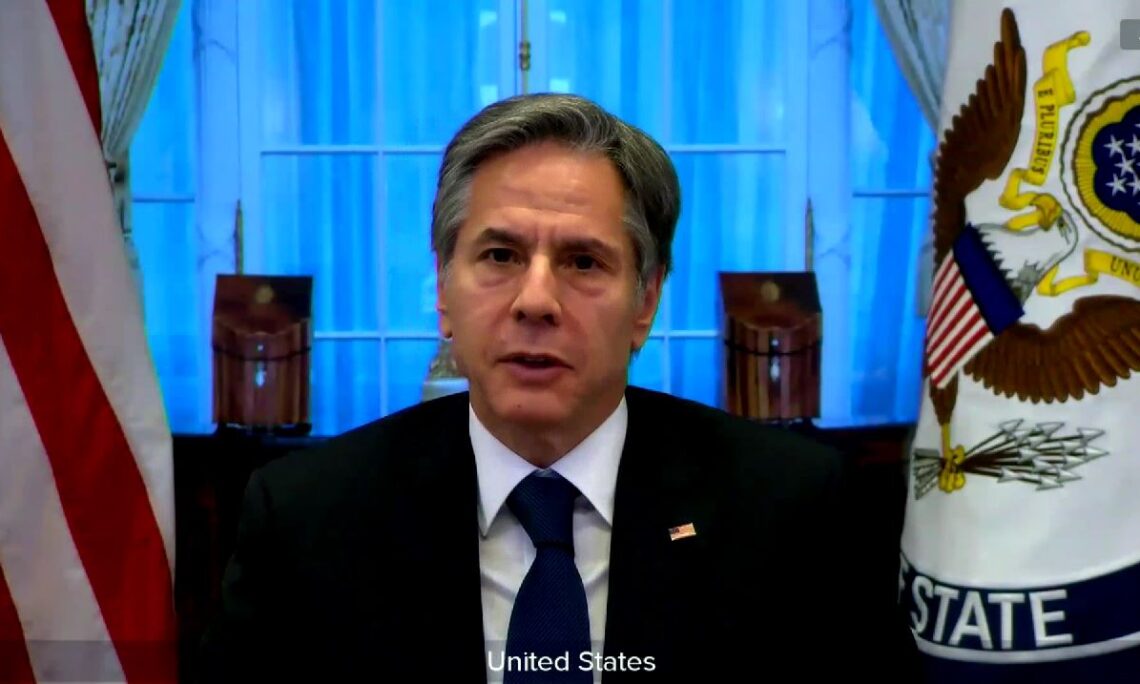 Well, thank you very much, Foreign Minister Jaishankar. It’s wonderful to be with you and please convey our thanks to Prime Minister Modi for bringing us together for this critically important discussion and for India’s leadership on these issues, especially in championing a free and open Indo-Pacific.

When I last had the chance to address the Council back in May, it was to underscore the importance of defending, upholding, and revitalizing the rules-based international order grounded in the United Nations Charter. Few issues are more crucial to that endeavor than the future of our ocean. The ocean not only covers 70 percent of Earth and accounts for 97 percent of its water, but it is crucial to the livelihood of our people and the sustainability of our planet. Maritime safety and security are enduring interests of all nations and are vital natural (inaudible).

Thank you. Freedom of navigation and overflight and the unimpeded flow of lawful maritime commerce are also critical to the security and prosperity of nations and to global stability. The international community has long benefited from a rules-based maritime order where international law, as reflected in the 1982 United Nations Convention on the Law of the Sea, sets out the legal framework for all activities in the ocean and seas.

But despite having a clear body of international law that we’ve all committed to abide by and uphold, despite all the ways that freedom of the seas, open waterways, and the unimpeded flow of lawful maritime commerce have delivered for nations and people around the world, and despite the indispensable role this maritime order has played in fostering economic activity, security cooperation, scientific innovation, environmental sustainability – despite all of that, the order is under serious threat.

That’s why I’m grateful for India’s leadership in bringing us together today and calling on all nations to recommit to defending and strengthening the maritime rules and principles that we forged together and committed to uphold.

Let me just speak, if I could, specifically to some of the critical areas where we see maritime rules and principles under threat.

Five years ago, an arbitral tribunal constituted under the 1982 Law of the Sea Convention delivered a unanimous and legally binding decision to the parties before it firmly rejecting unlawful, expansive South China Sea maritime claims as being inconsistent with international law. The United States has consistently called for all countries to conform their maritime claims to the International Law of the Sea as reflected in the 1982 convention.

This is in keeping with the peaceful resolution of disputes and the sovereign equality of member-states, which are core principles enshrined in the United Nations Charter. Efforts to resolve maritime disputes through threat or use of force flout these principles.

Some may assert that resolving the dispute in the South China Sea is not the business of the United States or any other country that is not a claimant to the islands and waters. But it is the business and, even more, the responsibility of every member-state to defend the rules that we’ve all agreed to follow and peacefully resolve maritime disputes. Conflict in the South China Sea or in any ocean would have serious global consequences for security and for commerce. What’s more, when a state faces no consequences for ignoring these rules, it fuels greater impunity and instability everywhere.

States are also provocatively and unlawfully advancing their interests in the Persian Gulf and the Black Sea. On July 29th, the Mercer Street, a commercial ship that was peacefully transiting international waters in the North Arabian Sea, was attacked using explosive unmanned aerial vehicles, resulting in the death of two people. Upon review of the available information, we are confident that Iran conducted this unjustified attack, which is part of a pattern of attacks and other provocative behavior. These actions threaten freedom of navigation through this crucial waterway, international shipping and commerce, and the lives of people on the vessels involved.

On behalf of the United States, I reiterate my condolences to the families of the victims and to the United Kingdom and Romania. It is on all of our nations to hold accountable those responsible. Failing to do so will only fuel their sense of impunity and embolden others inclined to disregard the maritime order.

In the Black Sea, the Kerch Strait, the Sea of Azov, we see continued aggressive actions against Ukraine with dangerous incursions on the sea and in the air and the harassment of vessels, which are disrupting commerce and energy access. We reaffirm our support for Ukraine’s sovereignty and territorial integrity within its internationally recognized borders, extending to its territorial waters. Crimea is Ukraine.

When nations ignore or purport to redraw the borders of other nations, whether by land or by sea, they undermine the sovereign equality of member-states, a guiding principle of the United Nations.

Non-state actors also pose serious risk to maritime safety and security, from pirates and illicit maritime traffickers in the Gulf of Aden and the Indian Ocean, to pirates and armed robbers in the Gulf of Guinea, to drug traffickers in the Caribbean Sea and the Eastern Pacific. Yet our collective response to these actors shows how effective we can be when we work together to defend maritime order and hold those accountable who violate it.

We see that in the Africa-led Yaounde Architecture for Maritime Safety and Security, which was supported by Friends of the Gulf of Guinea, and in the Nigerian-led Deep Blue Project and Maritime Collaborative Forum. We see it in India’s Maritime Fusion Center, which has enhanced cooperation among Indian Ocean partners, and in the widespread ratification by countries of the Caribbean Basin of the Treaty of San Jose.

We see it in the Contact Group on Piracy off the Coast of Somalia, which has demonstrated significant success in building an effective regional response, most notably in law enforcement. The United States led the creation of this group and we remain active in its work and in coordinating naval operations to prevent a resurgence of piracy in the area. We’re grateful to fellow Security Council members for supporting annual resolutions to help coordinate and strengthen these efforts.

We must bring the same coordinated and comprehensive responses to other threats to maritime safety and security. This includes illegal, unreported, and unregulated fishing, which undermines the sustainability of fish stocks, circumvents agreed conservation and management measures, and violate the sovereign rights of coastal states, and often goes hand in hand with the use of forced labor and other illicit activities. And it also includes responding to environmental disasters, like the cooperation between Sri Lanka, the United States, and other countries to mitigate the impact of the MV X-Press Pearl catastrophe.

All of these activities require that we share information and coordinate our responses, that we help build the capacity of our maritime partners, that we engage with affected communities, industry, nongovernmental organizations, which are critically important allies in this effort.

Together, our nations have spent decades building this maritime order and the broader rules-based international system that it is a part of. We’ve done so out of a shared recognition that it benefits all our nations and all our people when governments accept certain constraints on their actions rather than living in a world where the strong do what they can and where those who are less powerful feel coerced and threatened.

That’s never been more true than it is today, and that makes the collective effort to defend, to strengthen, and build upon this order more urgent than ever. Thanks very much.