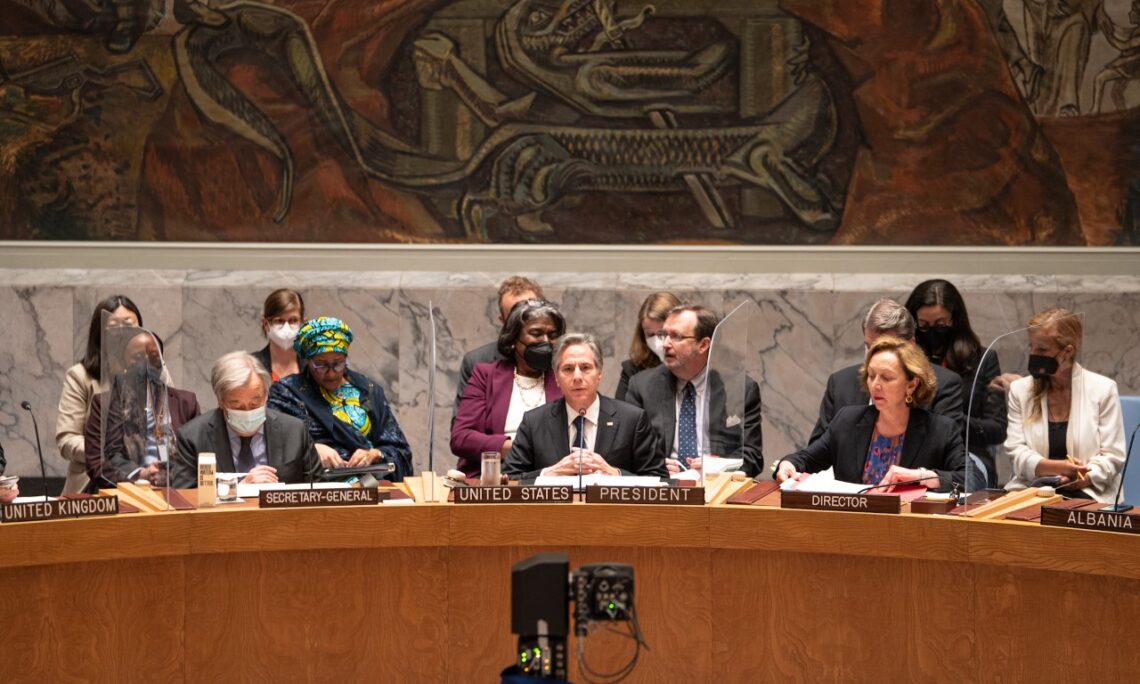 I shall now make a statement in my capacity as the Secretary of State of the United States of America.

And again, good morning to everyone. Thank you all very much for being here. My thanks to the secretary-general, to Executive Director Beasley, to Director General Chew, and to Gro Intelligence CEO Sara Menker. Thank you for the superb briefings of the council today that bring powerfully before us the facts and the challenge that we have to meet. And thank you for your work every day on an issue that is truly critical to humanity.

We do meet at a moment of unprecedented global hunger, fueled, as we’ve heard, by climate change, by COVID-19, and made even worse by conflict.

Indeed, conflicts around the world are increasingly driving this crisis. According to the Food and Agriculture Organization and the World Food Program, the number of people affected by food insecurity due to conflict rose from about 100 million people in 2020, to 139 million or so people in 2021, to an estimated 161 million people in 2022. The World Bank believes that Russia’s war in Ukraine could add another 40 million people to this total.

Yesterday, we had ministers from more than 30 countries come together here at the United Nations to address the drivers of – and advance solutions to – global food insecurity, including by meeting the urgent need for food, for fertilizer, humanitarian financing, investing more in the resilience of agriculture and vulnerable populations. For our part, the United States announced another $215 million in emergency food assistance to add to our $2.3 billion in humanitarian food aid since February. I want to thank all of the countries that stepped up, and I want to encourage others to join us.

In 2018, this council adopted Resolution 2417, which condemned the use of starvation of civilians as a tool of war, and noted that such a use may constitute a war crime.

Yet, in the years since that resolution, the problem has only grown worse. The Russian Federation’s flagrant disregard of this resolution is just the latest example of a government using the hunger of civilians to try to advance its objectives. It’s also another example of how Russia is violating the rules-based international order that is integral to the shared security and prosperity of all UN member states – an order this council, and in particular its permanent members, have a responsibility to uphold, to defend, and to strengthen.

In this council, a few members have repeatedly used language lamenting the suffering caused by this war and calling on “all sides” to bring it to a stop. Let’s not use diplomatic speak to obfuscate what are simple facts: The decision to wage this war is the Kremlin’s, and the Kremlin’s alone. If Russia stopped fighting tomorrow, the war would end. If Ukraine stopped fighting, there would be no more Ukraine.

Since February 24th, Russian naval operations have demonstrated the intent to control access to the northwestern Black Sea, the Sea of Azov, to block Ukrainian ports. Our assessment is that this is a deliberate effort, evidenced through a series of actions taken by the Russian Government.

On the first day of the invasion, Russia issued an official warning to all members that significant areas of the Black Sea were closed to commercial traffic, essentially shutting them down to shipping.

Since then, the Russian military has repeatedly blocked safe passage to and from Ukraine by closing the Kerch Strait, tightening its control over the Sea of Azov, stationing warships off Ukrainian ports. And Russia has struck Ukrainian ports multiple times.

These and other actions have effectively cut off all commercial naval traffic in and around the port of Odessa.

The Russian Federation has mirrored these attacks on land, repeatedly attacking Ukrainian civilian infrastructure that is critical to the production and transport of food, such as water, power, rail lines; destroying Ukrainian grain storage facilities; stealing stocks of food in the parts of Ukraine that it illegally occupies.

The consequences of these actions have been devastating: The food supply for millions of Ukrainians – and millions more around the world – has quite literally been held hostage by the Russian military.

The World Food Program recently estimated that a third of all Ukrainians are facing food insecurity, with children, pregnant women, the elderly at heightened risk of malnutrition.

In besieged cities like Mariupol, Russian forces have repeatedly blocked the delivery of food and other lifesaving aid to tens of thousands of trapped civilians. A mother who recently escaped from the city talked about the agony of watching her six-year-old daughter suffer the daily pang of hunger and being powerless to do anything about it. “I just sobbed,” she said, “screaming into a pillow when no one could see.” She and her children eventually escaped. Countless thousands of others are still trapped.

The Russian Government seems to believe that using food as a weapon will help accomplish what its invasion has not: to break the spirit of the Ukrainian people.

Still, Ukrainians are going to great lengths to feed their own people and to feed the world. Farmers in Ukraine continue to risk their lives to produce wheat and other crops. Many have returned to fields that are filled with mines. They wear bulletproof vests and helmets as they harvest.

And as we’ve heard already – powerfully – this morning, it’s not only Ukrainians who are suffering.

As a result of the Russian Government’s actions, some 20 million tons of grain sit unused in Ukrainian silos as global food supplies dwindle, prices skyrocket, causing more around the world to experience food insecurity.

This includes countries already under enormous duress – the secretary-general alluded to a number of them – like Lebanon, which usually gets 80 percent of its wheat imports from Ukraine; Somalia, already on the brink of a famine even before Russian tanks rolled into Ukraine and which must now deal with rising wheat and flour costs.

The Russian Federation claims falsely that the international community’s sanctions are to blame for worsening the global food crisis.

Sanctions aren’t preventing Russia from exporting food and fertilizer; the sanctions imposed by the United States and many other countries deliberately include carveouts for food, for fertilizer, and seeds from Russia, and we’re working with countries every day to ensure that they understand that sanctions do not prevent the flow of these items.

No, the decision to weaponize food is Moscow’s and Moscow’s alone.

Don’t take my word for it. Even Dmitry Medvedev, the deputy chairman of Russia’s security council, former Russian president, recently said that Russia’s agricultural products were, and I quote, its “quiet weapon,” end quote. He then added, and I quote, “Quiet but ominous,” end quote.

This council has a unique responsibility to address the current crisis, which constitutes a serious threat to international peace and security.

That starts by strongly and unequivocally calling the Kremlin out for its atrocities in Ukraine, and for worsening the global food crisis through an unprovoked war of aggression.

More concretely, members of the council – and, for that matter, every UN member state – should press Russia to stop actions that are making the food crisis in Ukraine and around the globe worse than it already was.

Stop blockading the ports in the Black Sea and the Sea of Azov.

Allow for the free flow of ships and trains and trucks carrying food out of Ukraine.

Stop preventing food and other lifesaving supplies from reaching civilians in besieged Ukrainian towns and cities.

Stop threatening to withhold food and fertilizer exports from countries that criticize your war of aggression.

The Russian Federation is not the only government or organization to exploit food insecurity for its own cynical ends.

In South Sudan, armed groups and warring parties have for years blocked humanitarian assistance to civilians. Experts estimate that up to 7 million people will face crisis levels of food insecurity in the country in this year.

In Syria, with the Kremlin’s ongoing support, the Assad regime has besieged communities like Eastern Ghouta, and caused the widespread starvation of its own people. It also routinely obstructs the cross-border delivery of lifesaving humanitarian aid, robbing and even attacking United Nations convoys, as we’ve discussed repeatedly in this council.

This council must consistently call out governments and armed groups when they use similar tactics, like attacking the means of food production and distribution, blocking humanitarian aid from reaching those in need, besieging civilian populations.

The United Nations was created with the aim of advancing human rights and preventing atrocities, including, including the atrocity of using starvation as a weapon against civilians, like during the Siege of Leningrad by the Nazis, during which an estimated 1 million Russians lost their lives, including many who starved to death. Among the victims was the 1-year-old brother of President Putin; or during the Holodomor, during which millions of Ukrainians died of hunger due to a Soviet campaign of forced collectivization and terror.

It is on us to prevent this history from repeating itself, to make sure that the past is not prologue. It’s simple: The lives of millions of people depend upon it.

By United States Mission to the United Nations | 19 May, 2022 | Topics: Highlights, Remarks and Highlights