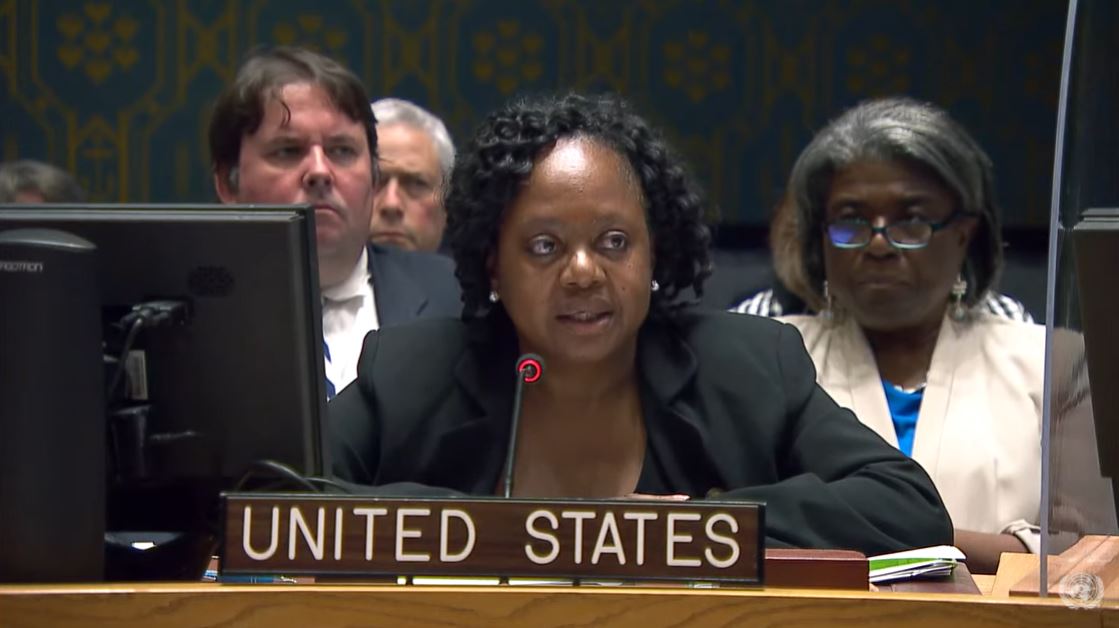 Thank you, Director General Grossi, for your briefing on the situation at the Zaporizhzhya Nuclear Power Plant in Ukraine. We welcome the IAEA’s steadfast commitment to addressing the situation there and to nuclear safety worldwide.

The United States continues to closely monitor reports regarding the situation at the Zaporizhzhya facility, noting considerable concern regarding the risk of a nuclear incident that would endanger the people of Ukraine, neighboring states, and the international community.

The cause of the situation at the Zaporizhzhya facility is not a mystery. It is another tragic result of the Russian Federation’s decision to further invade its sovereign neighbor, Ukraine. Russia’s full-scale invasion has resulted in thousands of civilians killed or wounded to date and has violated the UN Charter and the principles of international law. The full-scale invasion has also contributed to a spike in global food insecurity, driven energy market volatility, and now heightened the risk of a catastrophic nuclear incident with consequences that could be felt in Ukraine and far beyond.

It is especially galling that Russia’s actions are taking place during the ongoing Review Conference of the Nuclear Non-Proliferation Treaty, being held just down the hall from where we sit. Russia’s behavior could not more directly undercut the shared interests of the States Parties in strengthening nonproliferation, disarmament, and peaceful uses of nuclear energy.

The solution for what is happening at the Zaporizhzhya facility is straightforward. The United States calls for the Russian Federation to immediately withdraw its forces from Ukraine’s territory. This would allow for Ukraine to restore the impeccable safety, security, and safeguards performance it upheld for decades at the facility.

Russia continues to deploy disinformation to distract from the realities on the ground and now claims that Ukraine is culpable for the situation at the Zaporizhzhya facility. This completely ignores the real issue, which is Russia’s illegal presence at the facility. Russia alone created risks, and with it launched a full-scale invasion, and it can eliminate those risks now by withdrawing from Ukraine.

In the absence of such a withdrawal, however, there are steps we must take now to minimize the risks.

To start, the United States reiterates the importance of facilitating access for IAEA personnel to address nuclear safety, security, and safeguards concerns at the Zaporizhzhya facility, as well as at other nuclear facilities across the country, in a manner that respects Ukrainian sovereignty. This visit cannot wait any longer.

We once again call on Russia to cease all military operations at or near Ukraine’s nuclear facilities and insist that Russia immediately return full control of the Zaporizhzhya facility to Ukraine.

We are also aware of claims of mistreatment of the power plant’s Ukrainian staff by Russian soldiers and note that, if true, such treatment would be inconsistent with the IAEA’s Seven Pillars of Nuclear Safety and Security, which Russia has endorsed. Ukrainian staff must be allowed to fulfill their important duties free from the pressure of Russia’s armed forces.

The United States also supports Ukraine’s proposal to create a demilitarized zone around the Zaporizhzhya plant. Reports, such as that by the IAEA we heard today, underscore the urgency of the situation.

But what is happening at this nuclear power plant is not the only alarming situation we face in the areas where Russia’s forces operate in Ukraine. Russia has expanded its aims in Ukraine and seeks to dismantle it as a geo-political entity, dissolving it from the world map.

We are now getting a clearer picture of what life is like in areas under Russian military control. Through intimidation, censorship, and propaganda, Russia is clearly laying the foundation to try – once again – to illegally annex territory from its neighbor. None of us should be surprised if Russia suddenly announces false referenda in these regions as a pretext to grabbing more of Ukraine’s sovereign territory.

The many consequences of this conflict, including the situation at the Zaporizhzhya nuclear power plant, will only end when Russia ends its war. Today the United States demands particularly urgent action to address the nuclear risks posed by Russia’s latest moves. This must be done through the work of the IAEA and a return of full control of the Zaporizhzhya facility to Ukraine.