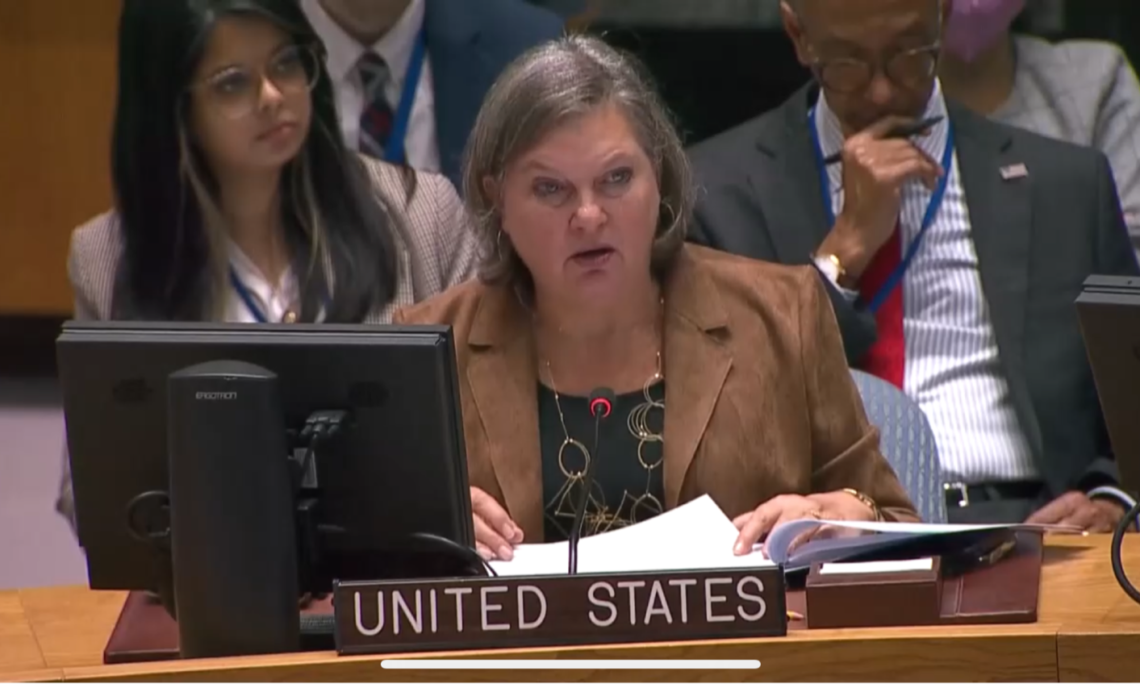 First, Minister Coveney, our hearts are with you, the Irish people, the family of your fallen peacekeeper, and with those who are recovering from the vicious attack in Lebanon – further evidence of the risks that all of our peacekeepers take in support of the missions of this body.

I also want to thank Dr. Jaishankar, Permanent Representative Kamboj, and India for this vital session, for your presidency of the Council this month, and for your active engagement and leadership as chair of the Counterterrorism Committee this year.

The U.S. counterterrorism coordinator was just in New Delhi this week working on ways to deepen our own partnership, including on new and emerging threats.

I want to also thank our UN briefers, especially Mrs. Anjali, for reminding us that the numbers on terrorism don’t show the true story of the pain and the human toll.

Last year, the world faced more than 8,000 terrorist incidents, across 65 countries, killing more than 23,000 people – stories like Mrs. Anjali, of families and communities left shattered, stories of unbelievable horror and desperation, but also of heroism like hers.

Other recent attacks around the world – the bombing of a police station in Indonesia, the coup attempt in Germany, and hateful incidents here in our country – remind us that no country is safe from this threat, and it cannot be defeated by any of us alone or by any regional bloc. We must all work together.

It is incumbent upon us to tackle these issues jointly – from the under- and ungoverned spaces susceptible to terrorist control, to the desperate conditions conducive to recruitment, to the sources of illicit financing, to the perverse ideologies spreading online and across borders.

The UN now estimates that racially or ethnically motivated violent extremism, what we call REMVE, has increased over 320 percent in recent years, with worrying new transnational links among groups.

This ideology, rooted in perennial hate like xenophobia, racism, antisemitism, and all forms of bigotry, has found common cause online, with new members being recruited through various social media platforms, and fake and manipulated photos quickly spreading misinformation and hate.

It is therefore critical that we build on our shared capabilities to better detect, degrade, and respond to these new threats.

That’s why we are working with partners to strengthen their domestic law enforcement, judicial capabilities, and border security, improve intelligence and information sharing on these threats, and sever key sources of terrorist-financing.

In May, we launched the Counterterrorism Law Enforcement Forum in Berlin, bringing together law enforcement officials from some 40 countries to build capacity and share best practices.

In Kenya, we work with security and law enforcement to enhance detection and prevention, and improve investigations, prosecutions, and ensure we get convictions.

And here in September, during the UN General Assembly at the Global Counterterrorism Forum, I announced a new racially and ethnically motivated violent extremism toolkit developed jointly by the United States and Norway to provide practical recommendations for countries and communities to recognize and respond to this threat.

But while we work on REMVE, we also have to not distract from the parallel fight against al-Qaida and ISIS wherever it is found.

Despite the success of our Global Coalition to Defeat ISIS and the decisive strike against al-Qaida leader Ayman al-Zawahiri in July, the threat is significant.

One way the Security Council can help is by doing more on the current sanctions list to ensure it accurately reflects the realities on the ground.

UN sanctions are an essential tool in our counterterrorism toolkit. The Council should support listing all ISIS and al-Qaida affiliates, as well as their leaders and key supporters, so that they face global asset freezes, travel bans, and arms embargos.

Unfortunately, the 1267 and 751 Committees have only agreed to designate one entity and one individual this year. An array of holds, due to unrelated political fights, stand in the way of new listings.

This political obstructionism fundamentally undermines the Committees’ mandates to prevent and deter threats to international peace and security and weakens the impact of the UN sanctions regime.

We have been pleased to co-nominate several listings with India on ISIS and al-Qaida, and we hope that the 1267 Committee will move forward with these and other new nominations.

The Council took strong steps last week to adopt Resolution 2664 to help ensure that reputable, impartial humanitarian actors are able to do their life-saving work, even in areas where terrorists operate or control territory. This will ensure that those in need get the help they need and are not left at the mercy of terrorists.

We simply cannot afford to leave civilians exposed to the predations of malign actors who fail to meet their basic needs, and often steal from them, destroy their property, and take their lives.

We are very grateful for the efforts of humanitarian organizations to advocate for this resolution and ensure they can help vulnerable populations.

It is also critical that counterterrorism campaigns not be used as a pretext for Member States to violate fundamental freedoms themselves. And it is concerning that some Member States seek to undermine the advances on gender, civil society, and human rights made in Security Council resolutions and the Global Counterterrorism Strategy.

We have seen time and again that counterterrorism cannot succeed through sheer force and hard security measures alone.

As I was reminded during my recent travels to Burkina Faso, Mali, Mauritania, and Niger, to be truly effective, as many have said, counterterrorism needs to be nested in a whole-of-government and whole-of-society effort.

We have to nurture good governance, respect for human rights, access to education, healthcare, and economic opportunity. We have to support governments and their ability to deliver for their citizens. That is key to breaking the cycle of violent extremism.

As I saw in Niger, we the United States can support security forces, that’s important and it’s paramount for slowing terrorist activities, but it’s not enough in a country where half of the students are not in school.

As Nigeran President Bazoum himself says, this kind of lack of education is a driver of the next generation of insecurity and terrorism.

We must ensure that women and girls have safe access to education, healthcare, and economic opportunity, and that their communities and their countries are more stable and more prosperous.

That’s why we are focused on implementing the current, robust global counterterrorism framework, focused on a whole-of-society approach.

I also have to register our deep concern over the untenable situation in northeast Syria, in the detention centers where the single largest grouping of terrorists anywhere in the world currently resides and the Al-Hol displaced persons camp with over 50,000 associated women and children.

With approximately 10,000 foreign fighters in detention in Northeast Syria, ISIS will seek to exploit regional instability to continue to pursue its ‘break the walls’ campaign, freeing prisoners and replenishing its ranks.

That’s why we are working with all of you to spearhead an urgent effort to improve security coordination and encourage countries to repatriate, rehabilitate, reintegrate, and, where appropriate, prosecute their nationals who participate in violent extremism.

As part of this approach, the Department of Defense is working to construct a new detention facility in neighboring Rumaylan that will be managed by the Syrian Democratic Forces to securely and more humanely accommodate detainees.

Finally, I would just note that I came from Washington where we are hosting 49 African Heads of State gathered for the U.S.-Africa Leaders Summit.

Over the past few days, we’ve engaged in meaningful efforts to advance shared peace and security, spur economic growth, revitalize democracy, improve health infrastructure, overcome global food and energy insecurity, and tackle the climate crisis – priorities that everyone around this table shares.

But all of these shared goals are put at risk by the pervasive threat of terrorism. And the inverse is also true, if we can make progress against these goals, we drain the swamp where terrorism lives and thrives.

So as we look collectively to overcome the cumulative destabilizing impact of covid, climate shocks, and armed conflict – including Russia’s brutal war on Ukraine – we cannot afford to fail here.

Next year, the General Assembly will review the Global Counterterrorism Strategy, and we urge the international community to unite to address the scourge of terrorism. Because as Mrs. Anjali has reminded us in painful detail, the consequences of failure must not be acceptable to any of us.